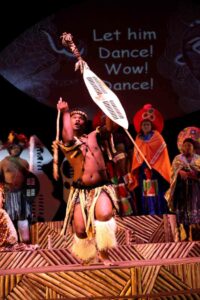 ZIYANKOMO is the charming, yet insightful story of illicit love in a time of corruption. It tells the story of Ziyankomo, a warrior in the court of King Mpande, king of the Zulu nation after Dingane and Shaka. Ziyankomo has an illicit love affair with one of King Mpande’s concubines and unfortunately gets caught. The one-act opera begins by setting the scene, we hear an ensemble telling us about the king’s concubines and how they are for the king alone. Emerging from the ensemble we see three rather funny female gossips who command the guards of the ‘seraglio’ to make sure none of the concubines are tempted to wander with the many virile good-looking warriors. The guards, in turn, tell us that no such thing will happen on their watch. No sooner have the guards made this claim, we see two illicit couples sneaking about. These couples are Ziyankomo and his lady love, Gabisile, and another warrior and his love. We hear the lovers sing about the dangers of their illicit relationship and we hear about how easy it is to succumb to the allure of ‘forbidden fruit’. They celebrate their love….then they are caught. Whilst the one couple escapes and in a cowardly way run away, the other, Ziyankomo and Gabisile, remain to face the music.

The court is convened to hear the trial of the illicit lovers. The trial is presided over by King Mpande, who by all accounts had become corrupted by his own power and the leisure it brought him. He announces that he will not soil his hands with the blood of another Royal person. He suggests that the law and tradition of the land is for the common man and that Royalty should be above the law. His Chief Minister, who also happens to be our protagonist’s father, stands up for custom and the law and insists that the court cannot differentiate between royalty and the common man where ‘the law’ is concerned. Prince Cetshwayo, speaks in defence of Ziyankomo, because after all not only is he royalty, he is also the nation’s finest warrior and traditional dancer. The Chief Minister insists on the letter of the law being applied. Ziyankomo is sentenced to death. Before he dies, he is commanded to dance one more time and the courtiers and Prince Cetshwayo bemoan his fate. Ziyankomo is carried off to be executed and he is followed by the entire court leaving a forlorn Gabisile alone on stage. She no longer wishes to live without her love and takes her own life. The ensemble return to the stage and pose the final question of the opera – is custom a good thing when it ends with tragic results.

Ultimately, the one act opera is about the nature and effect that corruption has on the lives of the people. Often our most innocent are those that are most deeply affected by the machinations of corrupt power brokers and greedy businessmen. It’s also about ‘consequences’ – the consequences of breaking the law, the consequences of illicit love. Tragedy, they say, is like a spring wound up tight waiting to be released and the tragic hero/heroine sometimes knowingly is the catalyst for that self-same release. This opera runs 10 March to 31 March 2012 in both Pretoria and Johannesburg. The Pretoria run is staged in the Opera, SA State Theatre, from 10 to 17 March, and in Johannesburg it’s presented in the Nelson Mandela auditorium of the Joburg Theatre, Braamfontein between 23 March and 31 March. For tickets visit here