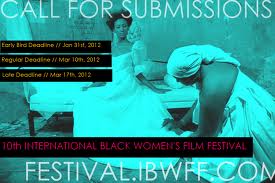 The Black Women’s Film International Film Festival will be held in San Francisco, California July 20 and 21, 2012. The organization is currently seeking films with the following criteria:

Digital shorts, animation and experimental films may present any issue, but filmmakers should be Black women or prominently feature a Black woman character or issue.All films (digital, animation, etc.) must be transferred onto a DVD for screenings. The IBWFF no longer accepts VHS or BETA tapes!

Online Films for Online Viewing, Only
Online films can be uploaded to a password-protected site; however, if your online film is selected for online viewing, you must upload it to a public web server or your own web server and send a viewing link.

If you’d like your online film to be considered as a “premiere,” then it cannot be available publicly until it is uploaded for an IBWFF viewing link via such services as YouTube, Vimeo, Brightcove, etc. Visit here for submission dates .
More importantly, the festival is in need of donations. To donate to the festival or to become a sponsor , click here .