This Week in African Art and Culture, which is particularly focused on the contemporary art scene, expands on the growth of both emerging and established art practitioners working on the continent and in the diaspora.

One of Africa’s most acclaimed curators adds to his growing list of achievements, becoming the incoming director for one of the most important museums in Germany. Curatorial fellows have been announced for the first edition of an initiative that was created in honor of the late Okwui Enwezor, to groom more outstanding curators on the continent. In Frankfurt, Germany, a solo exhibition by a Cameroonian artist capturing certain realities of his country’s children is on view, while on view in Hong Kong is a two-person exhibition featuring one of Africa’s finest architects. And one of the U.K.’s largest international contemporary art prize competitions sees all six shortlisted artists as winners.

Bonaventure Soh Bejeng Ndikung, a renowned curator known for his various professional achievements on the African art scene and in cities like Sonsbeek, The Netherlands and even Berlin where he resides, has been appointed director at one of Germany’s most important contemporary art museums, Haus der Kulturen der Welt.

As the next director, whose role begins January 2023, succeeding Bernd M. Scherer, he will focus in part on presenting the work of artists from outside Europe.

In a statement, Monika Grütters, Germany’s minister of state for culture and the media, said, “As an internationally sought-after renowned curator and cultural manager, Bonaventure Ndikung is a perfect fit for the Haus der Kulturen der Welt. With his excellent network, his scientific education, and his passion for art, he is virtually predestined to further develop this institution, which is unique in Europe. In doing so, he can build on the strong foundation that Bernd Scherer and his team have established.”

Ndikung is known in part for the Berlin space he founded with a team of collaborators in 2009 called Savvy Contemporary. The art space has been revered for groundbreaking exhibitions as well as performances, radio projects, publications and archive-building projects. Last year, Savvy moved its headquarters to a former casino space that is four times larger than its previous home in Berlin’s Wedding neighborhood.

Ndikung is also the artistic director of the recurring Dutch exhibition at Sonsbeek in Arnhem, The Netherlands titled, Force Times Distance – On Labour and its Sonic Ecologies, which will be on until 2024. The next iteration of the exhibition will open on July 2 and run through August 30, with works by Olu Oguibe, Lawrence Abu Hamdan, Ellen Gallagher, Ibrahim Mahama, and Laure Prouvost, among many others.

Other curatorial achievements by Ndikung include Bamako Encounters, a photography biennial in Mali for which he worked in 2019 as well as for a forthcoming edition later this year. He was also a curator at large for Documenta 14 in 2017 and a guest curator for the 2018 Dak’Art biennial in Dakar, Senegal. In 2020, he received the Order of Merit of the State of Berlin for his work at Savvy. He also holds a Ph.D. in medical biotechnology and has been a professor in that field; he is currently a professor in the master’s program Weißensee Academy of Art Berlin.

In a statement, Ndikung said, “Berlin is home to citizens from 190 nations, and these people must be fundamental in the future structuring of a house of world cultures, as fellow travelers and co-creators of a house of complexity, of analysis of the diverse asymmetries of the world and ultimately of reconciliation of cultures. I am honored that I have been given the responsibility to open the way for such a future.”

Independent Curators International (ICI) has announced the recipients of the inaugural edition of the curatorial research initiative launched by Marian Goodman Gallery in honor of the late Okwui Enwezor. The four recipients are Marie Hélène Pereira (Dakar, Senegal), Ronald Rose-Antoinette (La Trinité, Martinique), Anaïs Duplan (Brooklyn, New York/Iowa City, Iowa), and Negarra A. Kudumu (Seattle). Each recipient will receive a tailored framework for independent research, guided by mentors, leveraging ICI’s programs and network of collaborators as a resource, as well as a $10,000 stipend.

The initiative was conceived and launched by artist and filmmaker Steve McQueen and his representative gallery, Marian Goodman Gallery, in January 2021. In March, an open call for applications from Black, Indigenous and People of Color (BIPOC) curators was announced, and 141 curators from 26 countries applied, including 14 in Africa. Given the impressive number of proposals received, the initial number of fellows had to be doubled, with support from McQueen.

ICI’s Executive and Artistic Director Renaud Proch remarked that they “were so inspired by the sheer number and quality of the proposals. Being able to offer four fellowships rather than two and double the scope of the program this year has been truly meaningful, and we’re deeply grateful to Steve McQueen for making it possible. This expansion adds to ICI’s already growing program of curatorial fellowships, which are critically necessary to foster new voices in the field.”

The members of the jury committee for the selection are Hitomi Iwasaki (director of exhibitions and programs at the Queens Museum), Renaud Proch (ICI’s executive and artistic director) and Tumelo Mosaka (independent curator), who will serve as the lead mentor of the program.

Commenting on his role in this program, Mosaka said, “Someone once said ‘we rise by lifting others.’ This represents how Okwui Enwezor inspired me to do for others what he did for me. The ICI Fellowships offer an opportunity to bridge gaps, build networks across continents, and be an agent for social transformation.” Centered around the artist’s ongoing series of the same name, which he started in 2016, the exhibition features nine new works, expanding on Njepe’s observations and reflections on childhood and children’s hidden or unspoken inner worlds of play, dreams and imagination.

Drawing from his childhood experiences while growing up in a single-parent household, Njepe’s art works exorcise his own experiences of forced labor, portraying children doing odd jobs, their everyday reality juxtaposed with a world of dreams filled with cartoon characters, pop art iconography and cheerful peers, either in school or at play. Through these stark contrasts, the artist contemplates a society in which some children are forced to work while others have the chance to go to school and nurture their playful imaginations.

Moved to create his visual language by what he observes around him, the artist invites the viewer into worlds of possibility, at once containing the harsh aspects of life that children working on the streets contend with while placing them alongside scenes of alternative and perhaps more hopeful circumstances created in vibrant, vivid colors, offering glimpses of what is possible when children have the freedom to be.

Of his work, Njepe says, “I’m inspired by the moment when my art comes to life. Through each stroke, I attempt to gracefully and creatively breathe life into my works that represent my childhood and the lives of others. I try to communicate through series like Enfance volée (Stolen Childhood) a plea to denounce the atrocities and injustices caused to children—as I too was a victim, which is why I feel so compelled to fight this fight.” The jury for the U.K.’s largest international contemporary art prize, Artes Mundi 9, has unanimously decided to award the prize to all six artists shortlisted this year, among them, South African artist Dineo Seshee Bopape.

This decision was made in recognition of the times, considering the circumstances of exceptional social and economic upheaval, to acknowledge the outstanding quality of the artists’ individual practices, and the powerfully relevant work that has been especially either newly created or reconfigured for the exhibition.

The jurors for Artes Mundi 9 are Cosmin Costinas, executive director and curator of Para Site, Hong Kong and artistic director of Kathmandu Triennale 2020; Elvira Dyangani-Ose, director of The Showroom gallery in London; and Rachel Kent, chief curator at Museum of Contemporary Art Australia. The six shortlisted artists were originally selected from among more than 700 nominations from 90 countries.

Although the shortlist was first confirmed in September 2019—at a time when few could predict the global economic and social change the world was accelerating towards—it is no coincidence that the artists’ work all speaks to and resonates with the complex and challenging ideas and issues we need to address individually and collectively within our societies, concerning equity, representation, trauma and privilege.

The jurors commented, “Reflecting on 2020 into the present, this has been a time of enormous social, political and economic upheaval, and as a jury, we have reached a collective, unanimous decision to award the Artes Mundi 9 Prize to all six participating artists: Firelei Báez, Dineo Seshee Bopape, Meiro Koizumi, Beatriz Santiago Muñoz, Prabhakar Pachpute and Carrie Mae Weems.”

Nigel Prince, director of Artes Mundi said, “As director, and on behalf of the Artes Mundi staff team and board of trustees, I express my thanks to the jurors for all their work and offer heartfelt congratulations to Firelei, Dineo, Meiro, Prabhakar, Beatriz and Carrie. Working together over these last 18 months has been a most rewarding experience and has resulted in a timely and enriching exhibition that visually and conceptually speaks with great insight and potency.”

Dineo Seshee Bopape materially and conceptually engages with place, history and the consequences of the trans-Atlantic slave-trade through objects, ritual and song, presenting art as embodying the potential for acknowledgement and reconciliation. Running this June in Hong Kong is a two-person exhibition by Pace Gallery. The show, which coincided with Art Basel Hong Kong, is a collaboration between renowned Sir David Adjaye OBE (the Ghanaian-British artist and architect) and American artist Adam Pendleton.

The two first met in 2016 while Pendleton was installing a solo exhibition at the Museum of Contemporary Art Denver, an Adjaye-designed building. In the years that followed, their continued dialogue and mutual respect revealed a shared interest in the politics of space and representation.

Sharing the gallery space are Adjaye’s modular geometric sculptures, which take the form of pyramids. These are composed of individual elements fitted together, with the capacity to be reconfigured in a variety of orientations. In this way, they echo the combinatorial possibilities of language explored in Pendleton’s paintings.

Working in marble enabled Adjaye to distil broader ideas about materiality and form into objects that are on the boundary between art and architecture. “I took a lot of inspiration from Adam’s ability to make form, but also to disaggregate form, Adjaye said. “Of the three pyramids that have been formed, these three pyramids disaggregate, in the sense that they become four triangles, they become void, as well as making a solid—and it can become seats, or they can just grow it completely.”

Adjaye, who has received international acclaim for his impact on the field, operates globally, with studios in Accra, Ghana, London and New York. His largest project to date, The National Museum of African American History & Culture in Washington, D.C. opened on the National Mall in 2016 and was named Cultural Event of the Year by The New York Times. In 2017, Adjaye was recognized as one of the 100 most influential people of the year by TIME Magazine. 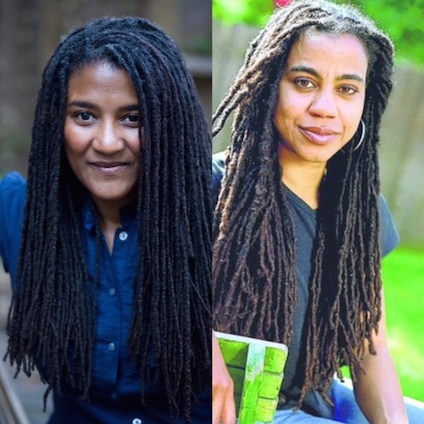 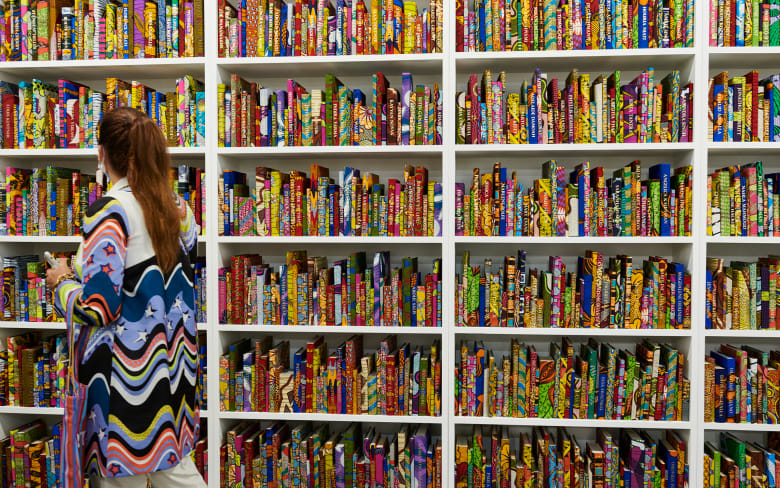 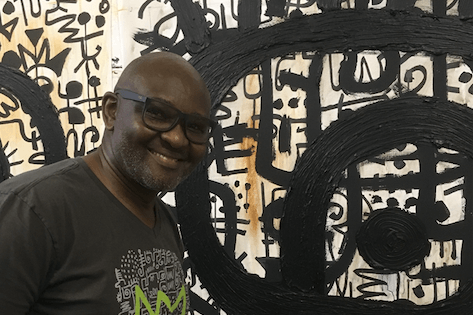