This year’s CFDA (Council of Fashion Designers of America, Inc.) Fashion Awards, announced on Sept. 14, brings forwardthe most diverse group of nominees and winners in its 39-year history. Among the winners are three standout Black designers whose work comes with meanings of social justice, Black history and gender-queer liberation. Christopher John Rodgers, Telfar Clemens, and Kerby Jean-Raymond have built brands tied to their narrative.

The shift in this year’s awards not only indicates a move to more inclusionary efforts but also reflects the tastes of a new generation of consumers-these designers sell at a more affordable price point than past winners. Emerging Designer of the Year Christopher John Rodgers’ womenswear has been worn by Chloe x Halle, Janet Mock, Lady Gaga and more. Rodgers’ won the CFDA Fashion Fund Award in 2019 and used that money to fund his Fall 2020 collection.

Designer Telfar Clemens for Telfar won the American Accessories Award. Telfar is most known for his shopping bag, also known as the “Brooklyn Birkin” for its high-demand appeal. The iconic rectangular bag is frequently sold out and is most popular amongst millennials who feel a part of this gender-queer community. Telfar is a unisex brand and has unofficial ambassadors who reflect their ethos.

Telfar’s win also signals a change from exclusivity to community. Undeniably, Telfar has established a digital community-active on social media, creating memes to share their love for the brand and the paramount desire for the sold-out bag. These actions will only help them to establish a firm social media presence in the long run, and by deciding to find out here about how certain growth services like Upleap and Mr. Insta can improve their following, this will only cement their presence in the online world further. Given the high demand, on Aug. 19 at 9 a.m. EDT to 9 a.m. EDT on Aug. 20, Telfar held the “Telfar Bag Security Program.” The program offered a 24-hour window for an unlimited number of orders, guaranteed for delivery by Jan. 15, 2021. This effort also was created to mediate the growing number of retailers who were making a profit from selling the coveted bags.

Additionally, he brings Fashion Week to Black cultural landmarks such as the Brooklyn’s Kings Theater and Weeksville Heritage Center. Jean-Raymond’s allegiance to Black progress also is met with capital investment. Pyer Moss’ most recent shoe, the Experiment 4 Sneaker, gave a portion of its proceeds to the Innocence Project. Founded in 1992, The Innocence Project exonerates the wrongly convicted through DNA testing and reforms the criminal justice system to prevent future injustice. They do this by providing legal representatives, like this appellate lawyer Atlanta can supply, and funding to those who can’t otherwise afford to appeal their case.

This year’s cohort features two photographers, Widline Cadet and Texas Isaiah, mixed media artist and painter Genesis Jerez, and video and performance artist Jacolby Satterwhite. A common thread of all these artists is their intimate connection to the subjects of their portraiture and figurative works. These recent innovations to the residency program are partly due to the curator for exhibitions Legacy Russell. On this year’s selection, Russell shares, “It’s a year to experiment.”

The experimentation of the previous cohort will be on view at MOMA PS1 this December. This Longing Vessel will feature new work by the 2019–20 cohort. Organized by Legacy Russell, the exhibition “enacts a radical intimacy: a ‘vessel’ to hold and be held as we stand within the museum space. In ‘longing,’ the works shown find the intersection between queerness and Blackness as a waypoint: one to yearn from, to reach toward, to leap beyond. This Longing Vessel troubles and excites ways of seeing, seeking new language for the building of extraordinary futures.”

STABLE Arts opened last fall in Northeast D.C. Their mission is to provide affordable and sustainable studio space and collaborating with local, national and international partners. STABLE opened with mixed reception––excitement and skepticism-due to the often whitewashing of arts, especially in a city with rapid gentrification and displacement.

Recently, underlying suspicion has come with just reason given public statements of organizational accountability from a “group of artists, arts admin, and angels” who have formed @artists_ofdc. The Instagram page went live on Sept. 16 after weeks of Black women publicly sharing their experiences with racism in the studio space. The harm has resulted in two artists leaving their studio space.

The artists’ open letter addresses their personal experience, but also coercive methods that are prevalent in predominantly white arts organizations. “The three white founders co-opt the language of diversity and inclusion while using STABLE to further their own careers at the expense of resident artists. The harm they cause is not limited to Black artists (Black womxn especially). Queer artists, POC artists, white artists, curators and neighbors are all negatively impacted by STABLE’s irresponsible and institutionally violent practices. STABLE’s resident artists are now in a position of either being displaced from their neighborhood studio space or continuing to pay rent for a toxic and harmful space.”

The artists at STABLE have made public a list of demands, which include removing the organization’s founders, having a role in the recruitment process for a new director of programming, a board restructure, restitution of rent for unpaid labor and more. The swift organization of a petition, site of receipts and support of artists who are calling out racism and other harm emphasize social media’s role in communal accountability. To learn more, and to support the artists seeking more autonomy, respect and authority in their studio experience, follow @artists_ofdc on Instagram. Their petition may be signed here.

Kayla McMillan has joined David Zwirner, one of the globe’s largest galleries, as a sales and arts management director. McMillan recently served as a director at New York’s Gavin Brown’s Enterprise. In her previous role, McMillan worked with artists including Cy Gavin, Laura Owens, Uri Aran, Frida Orupabo, Rachel Rose and Thomas Bayrle. In 2019, McMillan organized Rob Pruitt’s show The Obama Paintings at the Rebuild Foundation. Prior to joining Gavin Brown’s Enterprise,McMillan was based in Johannesburg, South Africa, and served as a communications consultant for international clients.

On her position, McMillan shares, “I believe I’m evidence that change is good. I don’t fit the typical gallery-director mold: I’m a first-generation, Black woman who has spent the majority of my career working outside of New York galleries. I consider all of these things assets because it informs my questioning of why things are done the way they are and if there’s a better way to do them.”

Art of the Collectors VIII

Gallerist and curator Myrtis Bedolla shares, “Art of the Collectors VIII is an ongoing investigation of preserving Black visual culture through imagery that explores and celebrates our multiplicity. And in conversations with collectors, we will examine topics of building wealth through art collecting and establishing one’s legacy through philanthropic efforts.”

On Sept. 11, Alvin Armstrong’s first solo exhibition, This Place Looks Different, opened at Medium Tings in Brooklyn, NY. Armstrong’s paintings reflect both his real life and others’ life circumstances, namely historical figures, who shape his outlook and public consciousness. The works in this show span in size, with the largest being eight feet tall. Some of the included works are from a series of Malcolm X portraits that Armstrong produced from June 19-July 4. In total, Armstrong painted 32 images of Malcolm X. The portraits include whimsical backgrounds and colors to reject the liminal stoicism attached to the political figure. The series was also a response to the disparaging images of Black bodies brutalized by the police.

Medium Tings is a gallery and project space founded by Stephanie Baptist. From 2017-2019, the gallery was run out of Baptist’s Crown Heights apartment. Since closing that space, Medium Tings remains to showcase artists of color digitally and in accessible, often unconventional spaces. 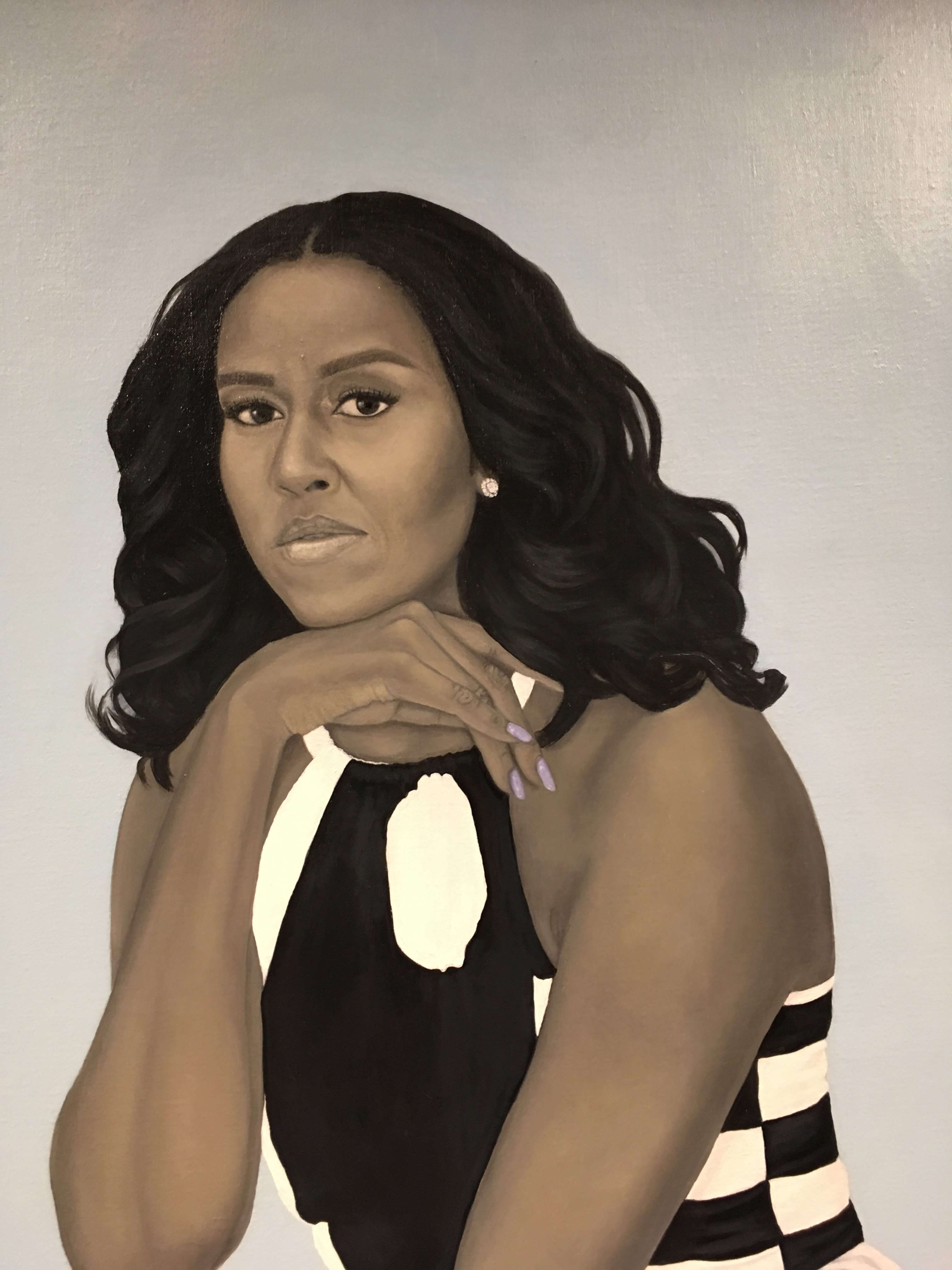 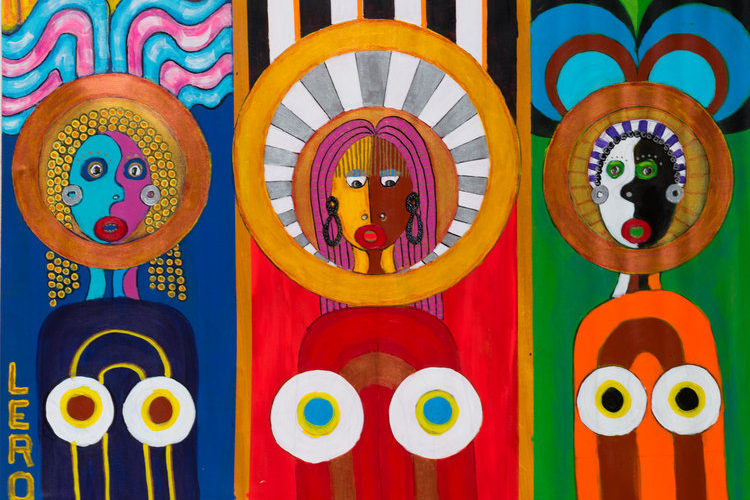