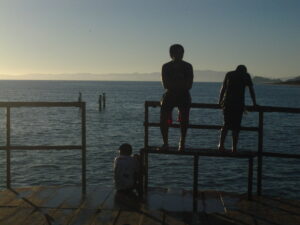 The Tribeca Film Institute (TFI) announced the award winners for the TFI Latin America Media Arts Fund, Heineken VOCES and TFI/WorldView Partnership grants at a celebration for Latin American filmmakers during the Tribeca Film Festival. The funds, totaling $130,000, support innovative Latin American film and video artists to help them explore stories reflecting diverse cultures and gain exposure in the film industry. In addition, Bloomberg, the new presenting sponsor of the TFI Latin America Media Arts Fund, will award grants and mentorship to the inaugural group of three Bloomberg Fellows to aid in the development of their projects.

The TFI Latin America Media Arts Fund awards $10,000 grants to animation, documentary, or hybrid feature-length films in advanced development, production or post-production from filmmakers living and working in the Caribbean, Mexico, Central and South America. Grantees also receive exclusive guidance from TFI to ensure that each film reaches completion and enters the U.S. marketplace from the best possible vantage point.

As the new presenting sponsor, Bloomberg will provide support that furthers TFI’s commitment to champion Latin American filmmakers. The partnership will launch in the summer of 2013 with a series of multi-day workshops in Sao Paulo, Brazil; Mexico City, Mexico; and Santiago, Chile. Each workshop will be aimed at educating, assisting and aiding five emerging filmmakers in each region with the development of their feature documentary or hybrid works, as well as focusing on pitch training and international funding. The three Bloomberg Fellows, one from each region, will be awarded a $12,000 grant and an invitation to participate in one of the workshops. The TFI Latin America Media Arts Fund is also sponsored by Moviecity and CANACINE.

“Bloomberg’s commitment as presenting sponsor allows us to provide in-depth, hands-on support to talented artists living and working in Latin America. It is an exciting time for Latin American filmmaking and thanks to Bloomberg we will be able to help introduce these creative and refreshing stories to audiences around the globe.” said Ryan Harrington, Director of Documentary Programming for TFI. “The VOCES grant allows us to invest in and cultivate Latin American talent working in the United States and provides American audiences with dynamic and diverse film experiences. We are thankful for the generous support from Bloomberg and Heineken.”

Each of the winning films were selected by a jury of industry professionals including producer, Leonardo Zimbron; award-winning filmmaker, Julia Bacha; and co-founding director of Cinema Tropical, Carlos A. Gutiérrez.

The following three filmmakers and project have been selected as the 2013 Bloomberg Fellows:

· Children/Los Ninos (Chile), Directed by Maite Alberdi Soto; Produced by Clara Taricco – A group of friends with Down’s Syndrome face a new stage in life. They feel unprepared to grow old. Parents die, they are left alone, and they suffer diseases of the elderly, like Alzheimer’s.

· The City Where I’m Getting Old (Brazil), Directed by Marilia Rocha; Produced by Luana Melgaço – At a moment when the Portuguese government publicly recommends that the country’s citizens seek work abroad, a young Portuguese woman, Teresa Pestana heads for the city of Belo Horizonte, one of the major Brazilian state capitals.

“We are excited to begin this new partnership with the TFI Latin America Media Arts Fund and to award our first Bloomberg Fellows,” said Erana Stennett, Bloomberg. “In addition to the Fellows honored at this year’s Festival, the strong industry support TFI will provide all of the filmmakers participating in the workshops in Sao Paulo, Mexico City and Santiago will be invaluable.”

The Girl Behind the Camera (Argentina), Directed and Produced by Paula Schargorodsky – A 35 year old woman has chronicled the last10 years of her life on film. Five boyfriends and two wedding proposals later she remains single. The Girl Behind the Camera is a humorous, intimate investigation on a generation of unsettled women that poses a question about the choices we make (or don’t make) in life.

· Missed Days/Los Dias No Vuelven (Mexico), Produced and Directed by Raul Cuesta; Written by Fernando del Razo – Disappointed over a premature retirement from professional tennis and never fulfilling his deceased father’s dreams, Enrique hopes the birth of his first child will bring him redemption.

· The Naptime (Mexico), Written, Produced and Directed by Carolina Platt – A visual elegy through the eyes of the director that follows how families learn to live with the loss of a child

· Solitude Square/Plaza de la Soledad (Mexico), Directed by Maya Goded; Produced by Martha Sosa Elizondo; Co-Produced by Iris Lammertsma – Two aged prostitutes see themselves forced to contemplate their lives and confront their issues so they can live out the remainder of their days with dignity and hope.

As part of the Latin America Media Arts Fund, the Heineken VOCES Award is granted to one documentary and one narrative project annually. Launched in 2012, the awards are granted to Latino filmmakers 21 and older living in the United States and working on feature-length narrative or documentary films that offer new perspectives on their cultural experiences.

“This is Heineken’s second year offering a VOCES grant and we are thrilled to continue to help establish the foundation for the next generation of Latino filmmakers,” said Pattie Falch, Brand Director, Heineken Sponsorships. “We are committed to supporting young Latinos so they can pursue their creative journeys, perfect their crafts in the film industry and realize their full potential.”

The winners of the Heineken VOCES grants are:
· Heineken VOCES Award for Documentary
Man of the Monkey, Directed by David Romberg – Intrigued by the tale of a scary man living in isolation with his chimpanzee wife, David Romberg travels to his childhood home on Ilha Grande, Brazil to find him, only to discover that the tale pales in comparison to what he uncovers.

Heineken VOCES Award for Narrative
Nobody is Watching, Written, Directed, Co-Produced by Julia Solomonoff, Written by Martina Broner, Co-Produced by Maria Arida – Guille, an out of work actor who knew success in Argentina, navigates life as an immigrant on the fringes of New York and wrestles to find a place he can call home.

An additional three development grants of $10,000 will be awarded to filmmaking teams based in Latin America and the Caribbean through the TFI/WorldView Partnership, a collaboration between the Tribeca Film Institute and CBA WorldView.

The winners of the TFI/WorldView Partnership grants are:

Growing in Oil (Venezuela), Written and Directed by Anabel Rodríguez Ríos – A story following the children of Congo Mirador as they survive the disappearance of their village, which is located in Lake Maracaibo, the largest oil field of Latin America. As a consequence of the oil industry, soil levels are changing and the village will turn into a swamp.

Night Inside Me (Bolivia), Directed by Sergio Estrada; Produced by Valeria Ponce – Primo is the leader of one of the most effective and experienced mining crews, yet not one of the luckiest. The crew’s routine changes the day Primo’s son decides to join them. When night falls in the mine… Everyone is left inside.

Swimming on Dry Land (Jamaica), Produced and Directed by Michelle Serieux – Jamaica is a land of many contradictions. The country that created Bob Marley and gave the world Rastafari, Reggae Music and “One Love,” has also produced a culture that is very intolerant of diversity.