There is a melody that hovers over the universe at dawn. It is a soft whisper that ushers in the new day and bids farewell to the previous night. Dawn is a fleeting moment, a temporal atmospheric shift, an in-between space that is neither night or day, light or dark. “…. while the dew is still on the roses…” the latest exhibition from contemporary artist Ebony G. Patterson, ponders the mystery of twilight, within a site-specific installation for the Perez Art Museum Miami (PAMM). “…. while the dew is still on the roses…” is a thematic survey spanning ten years that combines past and recent works from Patterson, manifest in a garden created by the artist.

The title of the exhibition is a line extracted from the hymn, I Come to the Garden Alone, a gospel song written by American songwriter C. Austin Miles in 1920. The song became popularized within the Black church throughout the 20th century, and it was recorded by legendary gospel singer and civil rights activist, Mahalia Jackson. It is a hymn of prayer and devotion that references the beauty of a garden at dawn and highlights the ephemeral nature of dew. For Patterson, the dew evokes twilight and, more metaphorically, the idea of fleeting youth as a contemporary vanitas lamentation. “What I like about the title ‘…while the dew is still on the roses…” is that it suggests that there is still a chance, there is a possibility for something more, a chance for change. It’s fleeting, but in many ways, it feels like a window of hope– a window of hope through something that is also tragic. Something that I am asking the audience to also ask itself about where it sits regarding these tragedies, these experiences,” Patterson explains. In the Garden, as the hymn is also called, is a container of memory within itself. It is often sung during various Protestant church services including funerals and triggers nostalgia for many people of the African Diaspora who were brought up in the church. We can view all of Patterson’s compositions as containers of memory that straddle lines between nostalgia and surreal dreams.

Patterson’s prolific image making is created from various mediums that are often executed in sculptural, collage-like forms. Patterson’s practice is also in dialogue with the work of Kehinde Wiley and Kerry James Marshall, painters that situate the black figure in flora-filled spaces while aggrandizing scenes in the large scale of canonical history paintings. Within Patterson’s practice, one work leads to another in a very deep formal aesthetic analysis that is also conceptual.

All of Ebony’s work has been connected to questions of violence against the Black and Brown body in a global context. “Her works are both expressions of outrage and lament,” explains Tobias Ostrander, chief curator of PAMM. “…. while the dew is still on the roses…” interrogates the tension between outrage and lament in order to trouble methods of memorialization. Ostrander further explains, “In many ways, her work is celebrating the beauty of young lives that are being lost–celebrating, but also very much giving dignity, visibility, and honor through her use of layering floral patterns, glitter, and embellishments.” Through her use of ornamentation and monumental scale, Patterson attempts to elevate Black figures by shrouding them in regality and deifying the dead as saints and martyrs to counter the violence of invisibility. After the death of her father in 2010, Patterson started dealing with concepts of erasure in her work. In her mixed media tapestries, decadent clothing appears absent from the body, playing with Patterson’s interest of how the work’s audience might make assumptions and projections of the bodies that would actually wear the garments. The artist is also interested in other ways that she could continue to push the bodies further into the landscape. While figures are in the landscape, they are also a part of the landscape and consumed by the landscape. The layers of embroidery, glass, glitter, silk, and found objects takeover the figures represented causing them to recede deeper into the composition. There are times when the seemingly random fragments are brought to the fore– an arm, a hand, shoe; a glove often comes to the surface, as well as other life forms such birds and insects. All these attributes imbue Patterson’s work with a haunting aura, an energy that causes the distance between the work and the viewer to shorten and eventually collapse. I have stared long enough at Patterson’s work that not only am I consumed by the imagery, but I am also consumed by the concepts that found it.

Perez Museum of Art Miami transformed its galleries to embody the surreal nature of Patterson’s work. The exhibition space is dimly lit and situates us within the dramatic mystery of a lush, overgrown garden at twilight. Patterson designed a fabric wallpaper that covers the walls of the entire exhibition. It has a deep purple/indigo colored background with a repeated photographic wilted floral motif simultaneously reminding us of life’s beauty and death’s inevitability. Silk florals and foliage are installed on the walls and around the work promoting both a sense of seduction and danger. Within the garden, there are grave plots, videos, music, and decadent faux flowers, causing viewers to slow down their movement throughout the installation and reflect on the intricate details. Patterson’s work is not meant to be viewed quickly.

It is impossible to rapidly scan her vast compositions without missing the import of the work. By slowing down the navigation of viewing, Patterson facilitates a deeper conversation that transcends the beauty of her images.

Many of the recent images Patterson creates are based on photographs of mourning loved ones and community members at sites of violent crimes. Patterson began looking at these images in relation to photographs of people who were murdered or killed violently when she was creating Dead Treez (2015), a solo exhibition for the Museum of Arts and Design, New York, New York. Lately, she has been interrogating the culture of social media and how images of people of color are deployed within the media at large. “It is a violent act to photograph the person whose body has been desecrated, then share that image (via social media) and comment on it,” explains Patterson. “We become culpable participators in an act that re-violates the body. So then, what does it mean to photograph mourners who are in their most vulnerable state?”

In …bearing witness…, (2017) Patterson evaluates how the functions of social media participate in reenacting violence upon people who are in the middle of grappling with personal tragedy within public spaces while having no control in how they are presented.

The question of who is allowed to bear witness to these tragedies is also important to the artist as she has observed racist and classist stereotypes promoted in the fore, while unifying examples of humanity, in its most relatable forms, recede the background. Patterson intervenes with the media’s traditional tropes of moving and still images that focus on the aesthetic qualities, rather than the human condition by creating inescapable large-scale pictorial environments.

“With these more recent works, the scales are even larger. It was very important that I find a way to physically plant the viewer inside the picture, in order to create a greater a sense of empathy,” says Patterson. Floating earth mounds have been created for the piece, Moments We Cannot Bury (2018). These mounds are covered with silk flowers that are embedded with objects the artist made of glass: hands, feet, shoes, hats. The objects are ghostly forms entwined in beds of silk flowers that are graves that take on island forms that viewers engage by walking around them. Patterson’s work explodes conventional ideas of still life, sculpture, and performance by allowing viewers to perform within the work as if they were ritualistically visiting the grave of a loved one.

In the installation Stars, (2018), hundreds of women’s shoes, covered in black glitter are suspended from the ceiling by shoelaces in a cloud-like form. The hanging shoes evoke a familiar feature in urban communities of throwing shoes over power lines to demarcate gang territories. This icon is also employed to create memorials for recently slain youth. The sparkling black shoes become a stand-in for Black bodies that have transformed into black stars in a heavenly realm.

The works exhibited at PAMM highlight Patterson’s emblematic style of sumptuously placed ornamentation that realizes tactile tropes with an opulent grandeur that hovers the line between confrontation and mourning. This gesture extends conversations concerning the visibility of marginalized people to include what Patterson calls the performativity of access. “There’s always a critique about the way poor people spend money,” Patterson explains. “But we exist in a society that places so much weight on material value, so then having material value becomes about having access. 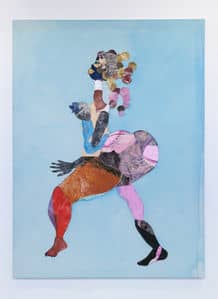 Tschabalala Self and More at The Frye Art Musem 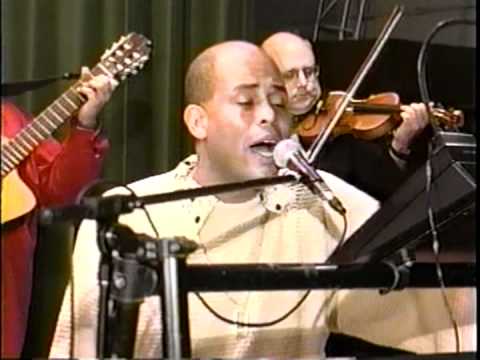