Lyons Wier Gallery is pleased to announce the exhibition, #BLACKMATTERLIVES by Fahamu Pecou.

#BLACKMATTERLIVES is the culmination of Fahamu’s four consecutive museum shows, including “Do or Die,” (an exhibition representing aspects of his research as a Ph.D. student) currently on view at the Halsey Institute of Contemporary Art, Charleston, SC. These shows provided Fahamu with the opportunity to further mine his trope and emerge with a new vocabulary. A vocabulary that synthesizes not only what is happening around him, but also what is going on inside of him. With #BLACKMATTERLIVES, he shifts from being a general narrator to a very personal raconteur, stripping away many of the secondary visual triggers that were used in his earlier works to ease the viewer into his own perceptions and personae. In #BLACKMATTERLIVES, he delivers a watershed series, wrought with unabashed angst, anger, and adulations. 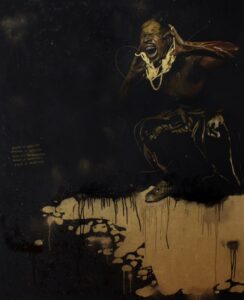 There is an undeniable racial disconnect happening not only in the United States but around the world. Fahamu has his finger on the pulse of this divide and is using it to tell a very personal tale. The raw emotions portrayed in this exhibition are palpable. The twisting and writhing of the body immediately draw reference to the ‘Black Lives Matter’ campaign, but it does not take much imagination to transfer these emotions from the subject (the artist) to the multitude of people suffering around the world.
Fahamu states, “Black Americans grow up with near schizophrenic emotions about our value and place in society. On one hand, we are celebrated and commodified–on the other, vilified and feared. We wrestle daily with a stigmatization that promotes a sense of worthlessness and angst and that often animates Black comportment”.

Lyons Wier Gallery is honored to host #BLACKMATTERLIVES and to have traveled with Fahamu Pecou along this journey over last ten years, to watch him grow not only as an artist but more importantly, as a human being. 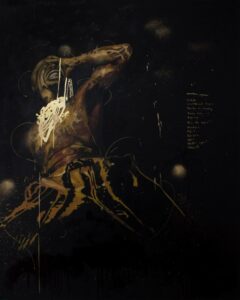 Broken Open, 2016, Acrylic, enamel, spray paint and gold leaf on canvas
60 x 48 in /152 x 122 cm
Pecou’s work has been reviewed in numerous publications such as Art in America, Harper’s Magazine, NY Arts Magazine, among others. He is a recipient of the Artadia Award (2009), the first ever Artist in Resident for the Harvey B.Gantt Center for African American Arts & Culture Resident at the McColl Center for Visual Art in Charlotte, NC (2010) and a winner of the 2012 West Collection Prize. Pecou’s work is featured in noted private and public collections including the Smithsonian National Museum of African American History and Culture, Washington, D.C., the Nasher Museum at Duke University, The High Museum of Art, Paul R. Jones Collection, Clark Atlanta University Art Collection, The Museum of Contemporary Art Georgia, The West Collection and Societe Generale, Paris, France, among others. Pecou is currently completing his Ph.D. degree at the Institute of Liberal Arts (ILA) at Emory University. Fahamu Pecou lives and works in Atlanta, GA. 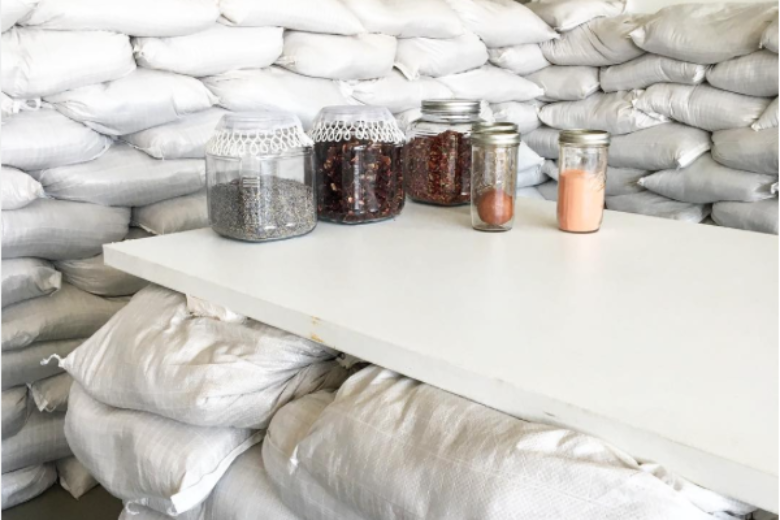