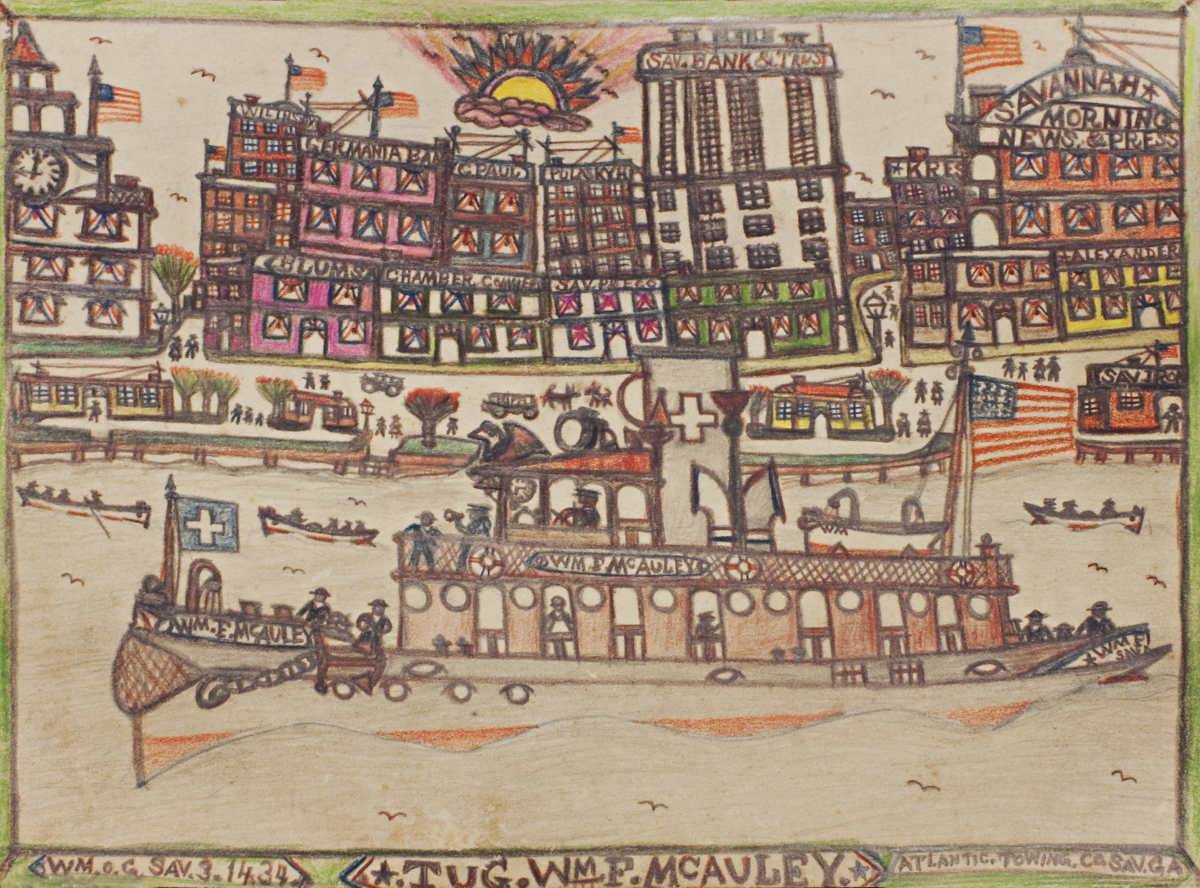 The sea has a way of asking, “what if?” What if William O. Golding, a self-taught Black man hadn’t been kidnapped aboard a ship in the Savannah harbor at the age of eight years old? What if 50 years later, while at the U.S. Marine Hospital, when he began the drawings we know of, he had been given more than dime-store crayons? What if his art were more well-known?

The newly opened exhibition of William O. Golding’s drawings at the Jepson Center, which is part of Telfair Museums in Savannah, Georgia, begins and ends with many “what ifs.” But these “what ifs” can get in the way of recognizing Golding’s mastery of his circumstances and materials. Words like “gumption” and “ingenuity” fit the artist more completely than words of lighter impact like “thrifty.” Golding’s works leave both a map and a portrait of a life full of dreams. With many unanswered “what-ifs.”

The exhibition, The Art of William O. Golding: Hard Knocks, Hardships and Lots of Experience running from April 1-Aug. 29, draws attention to the fact that it is the largest museum survey to date of the artist’s works. The exhibition is the culmination of over 25 years of research by senior curator Harry H. DeLorme, who situates Golding’s work within the settings of maritime developments, imperialism, folk art traditions, as well as familial, racial and autobiographical narratives. It sometimes takes more work to do less. The strength of the exhibition is that it provides additional context with the introduction of a keynote speaker and a tour of Golding’s birthplace in service of the art speaking more completely.

Golding’s drawings use a visual language that is both interior and accessible, as he bends memory and myth into one. Works are rendered from the point of view of a ship floating past a port or ship of Golding’s constructed remembering. There is a real economy of space in Golding’s works, with most negative space filled with seagulls, clouds or smaller ships. Golding masterfully employs crayon and pencil on the now yellowed paper to preserve an era of American history.

If Golding had access to marble or oil paints, it is likely his work would have expanded in breadth. The familiarity of Golding’s materials lends his work a further universal mastery. Golding uses these materials with a meticulous hand to recreate voyages, memories and symbolic lore. The materiality of Golding’s drawings also speaks to a multi-layered conversation on race, access and the power of mark-making, much like ledger art, such as by Terran Last Gun, Piikani (Blackfeet) and other Indigenous peoples of North America.

The drawings resonate with the powerful authenticity and witness of Bill Taylor’s work and the second-glance depth of Joe Minter. Golding’s works build a symbolic matrix, a visual language that synthesizes vastly different places and experiences through the prism of his memory. While very few sketches exist, these exhibited drawings by Golding feel precious—national treasures. 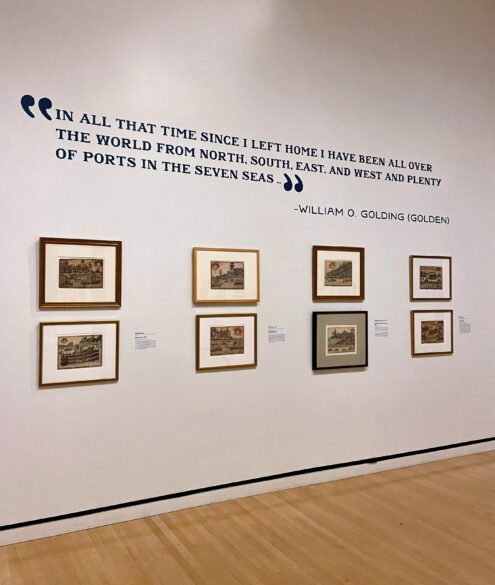 The Jepson Center exhibition gives a great gift in offering the ability to see Golding’s works in conversation with each other as they move through time. I was struck by the repetitive and rhythmic nature of Golding’s drawings. As the exhibited work comes from many disparate collections, the drawings are all roughly the same size, work with the same color palette and address maritime subject matter. Golding’s personal symbolism and motifs float from one drawing to the next, much like how memories float through dreams. I’m reminded of the cinematic atmospheres of Wes Anderson and David Lynch. The truth-telling and truth-making of Golding’s drawings speak to the limits of a photograph.

At a time when culturally we take images, particularly photographs, as real, these works are constellations of memory that allow space for the viewer to take what they will. Golding’s drawings are reconstructions of autobiography and auto-mythology at the same time. His works lean towards storytelling and the tradition of the oral ruttier, which author Dionne Brand (in A Map to the Door of No Return: Notes to Belonging, Toronto: Doubleday Canada, 2001, p. 212) describes as “a long poem containing navigational instructions which sailors learned by heart … contained the routes and tides, the stars and maybe the taste and flavors of the waters.”

The truth told, and the truth gleaned from these densely vibrant works are not always congruent. To a novice boating person like myself, many of the ships look the same, with different names and colors flying on top the masts. As curator DeLorme noted, several of the ships find their way into the backgrounds of drawings about other vessels, and his drawings of ports or shorelines will feature buildings from Hong Kong that are actually located in another city, or inclusions close to embellishments such as Napoleon’s tomb in Saint Helena and a post office on the Cape of Horn. 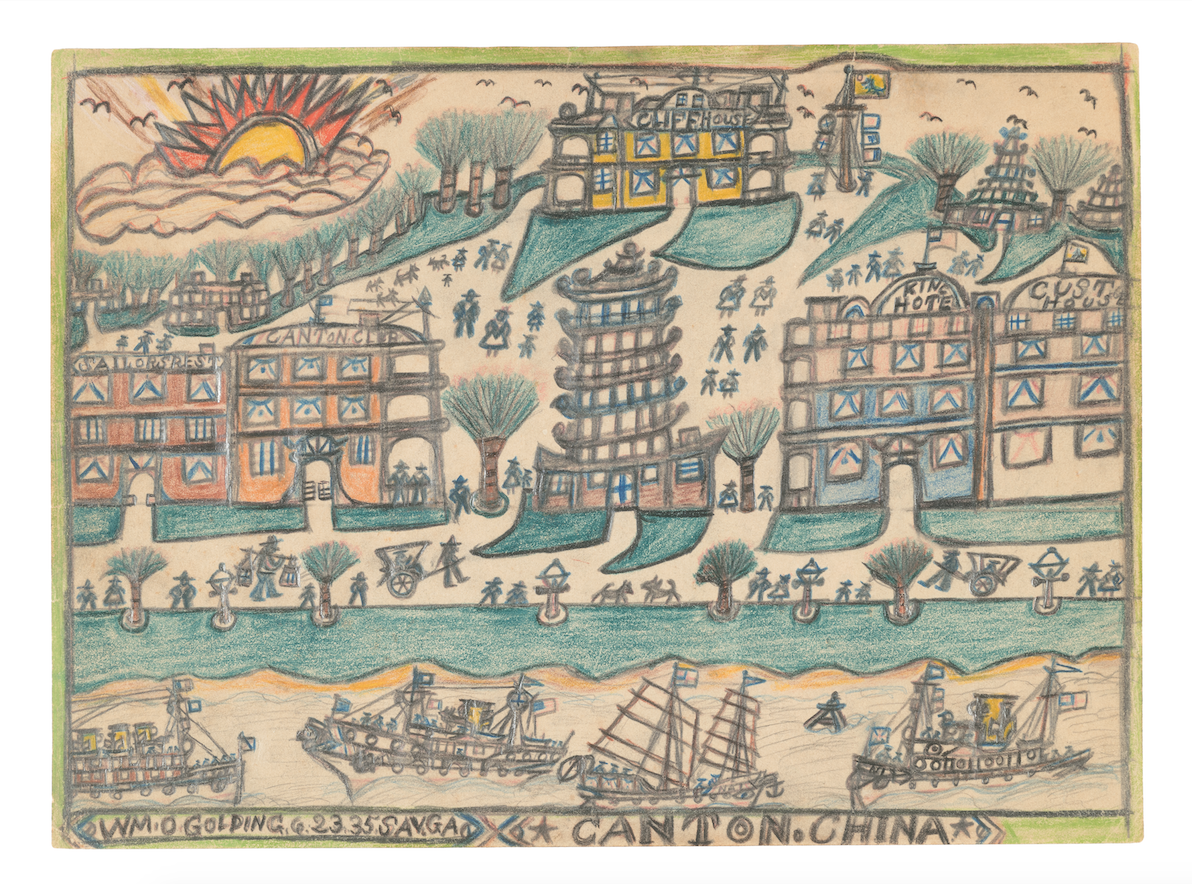 Golding also is noted to have refused to draw places he had not been. There is a component of artistic liberty here, but traveling by sea and by memory are not linear, as traveling by road is. Golding’s works render in a beautiful flatness the complex temporality of a voyage. His drawings move with a verve of a cubist, as one image holds many recollections. The works as a whole and individually are a stunningly complex network of portraits, not only of the places and ships but of the artist himself. One drawing of a ship, named after the artist, features a figurehead at the front of the ship, which to date, may be the only portrait we have of the artist.

While Golding served in the Navy during the Philippine-American War (1899-1902), his drawings don’t depict the impact or drama of war or conflict. One way to read Golding’s drawings of such warships such as the U.S.S. Texas or Fort Morgan is that of valorizing these tools of imperial power. Yet, these ships receive the same aesthetic treatment as do drawings of leisure steam yachts in port cities. The world at sea, and from the perspective of the sea that Golding shows, is that of Western imperialism. The ships and port towns of Golding’s drawings are bustling, active and dynamic.

While this menagerie, Garden of Earthly Delights-esque approach may be influenced by dream or memory associations, what Golding does not include is striking. There are canons but no canon holes, sinking ships or sharks. This is not J. M. W. Turner’s Slave Ship: Slavers Throwing Overboard Dead and Dying – Typhoon Coming (1840). Golding is drawing ships and dating drawings of port cities largely after the Civil War, but the nature of Golding’s experience as a Black man does not leave these works. Golding’s work is that of a Black man, but is not to be construed simply as Black art. He does not draw any of the infamous slave ships of the trans-Atlantic slave trade. 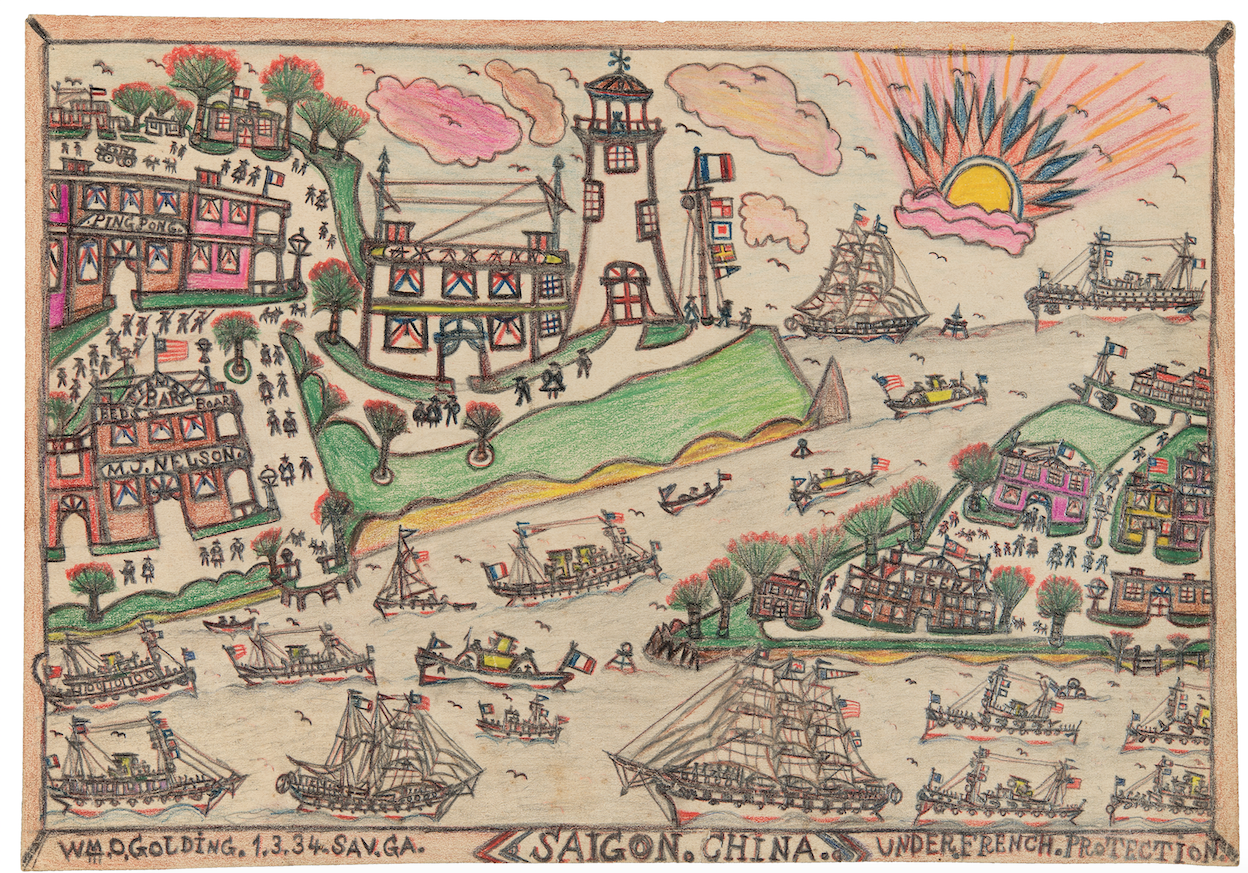 Golding’s drawings in this exhibition, serve as a catalog of notable vessels. Despite the different cargo and colors, the waters and the weather are the same. Scholar Christina Sharpe (In the Wake: On Blackness and Being, Durham: Duke University Press, 2016, p. 104) notes that “the weather is the totality of our environments; the weather is the total climate; and the climate is anti-Black.” Golding’s artistic practice and the environments of the ports and ships he drew exist in these conditions. This is the same weather of Turner, Conrad and Melville.

While Golding’s works are personal and nautically detailed, they are alluring. Sailors are known to have created many forms of art at sea; the most famous perhaps is tattooing. Like tattoos, Golding’s work leaves both an impression and serves as a marker of time. His drawings have an energy and complexity that surpasses the ship paintings of cigar-smoked dens or vapid gift shops. This air of welcome comes from admiration that Golding displays towards the ships he served and lived on.

Even with the violent beginning to his time at sea, this world of sails and whitecaps was his. Golding’s works reiterate the power of reconstructing one’s memories—the agency one solidifies by retelling one’s own mythology. To look out onto the sea is to ask, “what if?” And to sail is to continually arrive at a new answer. 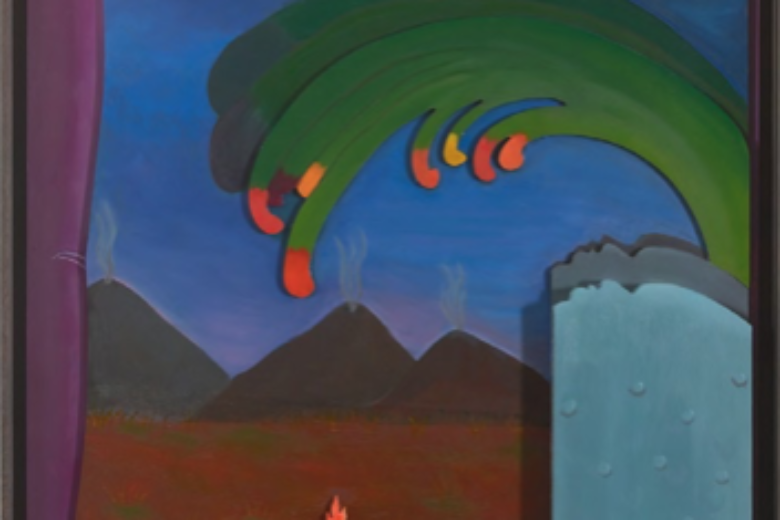