Miami artist, Christina Nicola creates work that explores abstraction within the human body through a variety of traditional and non-traditional expressions. Nicola uses forceful and emphatic styles of mark making in her work, as well as rich pigments and unconventional methods of drawing and painting. Her work captures the essence of female sensuality, and she embodies emotion through her mark making, I first met Christina last year during Miami art week at Art Africa. This time around Melissa and I were lucky enough to visit her studio and have a one on one about her artistic process, influences, and more. – Tiffany Garnett Melissa Hunter Davis (MHD): Tell me about you, how did you get started?

Christina: As long as I can remember I was always interested in art and my grandma, my dad’s mother was always an artist and making paintings and doing ceramics. I think I was always inspired by that. My family’s pretty supportive, and then my dad is also pretty creative, he’s a musician. I think that’s why they were more open to that idea more than other parents might have been.

MHD: Did you do any middle or high school art programs?

Christina: I did art in middle school, and then I went to a magnet school. They had a magnet program so I did their art program and I studied studio art at UCF (University of Central Florida).

MHD: While studying at UCF did you develop a particular style and philosophy?

Christina: What I understand from studio art programs is they start you off with basic drawing. During that time I was heavier into charcoal and doing stark and gritty drawings. I took that with me. I do a lot of mixed media so a lot of drawing mixed with painting. I think that comes through in that sense. The philosophy that I developed was focusing on my love of drawing faces and people but also seeing how I can relate to things in life through portraiture and figurative work.

MHD: What was it like being in a fine arts program at a predominately white school?

Christina: It wasn’t so bad because there are many different people in our program. Some of the teachers, they have this way of thinking, and it’s not going to change. It was weird getting help from people or my mentor. I had a teacher who was just like if you write such good artist statements without the work to back it up, you’re just another smart Black woman; we already have enough of those.

MHD: I’ve noticed a lot of your subjects are black women, is there a particular reason? Also, there’s a type of sensuality in your work, not in a sexual manner but like a softness that I enjoy.

Christina: Thank you. I think mostly because my work started with self-portraits and I know the female body the best. I think there’s that and also when I was doing charcoal drawings, people would always say, “Oh they’re Black.” Sometimes I’d draw a non-black person but because it’s charcoal they appeared black. I think that led me to focus on black figures. I know that Kerry James Marshall says that he never drew a white person, one day he just decided not to. I think it’s important to be intentional about who you’re going to paint. Above: Christina Nicola. AfroGalactic Girl and the Freudian Slip.

Christina: I did that last year as part of this “Afrogalactic Girl,” series. I was just focusing on close portraiture of the face. I wanted to get into the skin tones. I like the way the sketch developed and the vitiligo condition sort of interests me because there are multiple skin tones at once, I liked playing with that idea. In this series, I was focusing on using different mediums to represent the skin tone or represent the hair as well. This piece since it’s on wood, I used wood stain and some oil paint and then chalk and pastel. The wood gave me a little bit of a problem because it sort of warps and that’s why I went to canvas and paper. MHD: You like to work on canvas, paper what’s your favorite?

Christina: I’ve always loved paper, but it’s hard to show. I feel like it has a different feel to it when you look at it. With canvas, you can just put it on a wall, but I think paper offers me the most because I love watercolor so out of all them, I go for paper. Christina: The series that I’m working on now is called “Lifebloodlust.” It came about last year in the after math of all the police shootings and everything. It was just one after the other, and you just don’t stop to think about it. I wanted to focus on that pain that you feel but not stay there. Just develop that and see how the pain becomes your strength. The things you go through in life, they make you stronger. Essentially that’s how I want to get through that. There are a few things that I’m going to be working on like this. They’re going to focus more on myself, things that have made me into a stronger person, the person that I am but then things that also relate to Black people in general. I started reading this book (Black Bodies, White Gazes by George Yancy) when I was working on this series my senior year of college. I never got through it, but it’s a pretty heavy book, so it kind of inspired the series that I’m working on. MHD: You read a lot. Clearly, that informs a lot of your work. Do you have a small reading list of things that are constant for you or is it always rotating?

Christina: It’s usually always rotating, but I do like to read about art history and stuff like that. Usually anatomy books or things like that. I like reading things that people recommend or that I might not have heard of on my own, as opposed to books I won’t ever read through. Christina: This piece was for a project where I was supposed to appropriate two different pieces of work. One that I appropriated was Whistler’s “The Falling Rocket, ” and then the other was “The Death of Sardanapalus” by Delacroix, a lot of this composition is from Delacroix, but the color scheme is from Whistler. I like this one, and I always wanted to continue it. MHD: Do you feel like your style will develop more in the future or are you going to stay in this for a while?

Christina: I always get inspired by different things, and I always want to try different things. I think sometimes I will go in a different direction or I’ll return to something. One piece I did was on plexiglass. I’m going to do some more because a lot of people were interested in that. I was always really into that clear look. I was experimenting with it in college.

MHD: You seem to be going a bit into commercial work. How’s the response been?

Christina: It’s been good I have a different name for my commercial artwork, Sidberry & Co. I try to do more commercial work because some people do community events and sometimes you’d be more inclined to be like no, I only do this but then that’s limiting so I want to see if I can go with it, and if someone buys it off the street then I’ll have more money to make more art. I think I’d just like to cater to that and people that are interested in putting stuff on their walls, whatever it is. Animals and flowers are what I usually try to go with. It’s weird to balance it with my other work, but there are things that I do gain from painting this way, like being freer and not just “I need to make things this way.” It’s still painting, but it gets my mind not to be so constrictive. It’s like meditation. If I find art books, they usually do help me. Just looking at the work is helpful to see how they do the composition. I always felt close to Lucian Freud and the way that he does texture, but I don’t want to go so commercial that it doesn’t make sense with my other artwork.

MHD: What inspires you now?

Christina: A lot of things at once, I guess I’ve focused more on moving towards full figures and worrying about the background and trying to create the space. You can get more of a sense of how you feel about the figure and draw more from it. Usually, I focus on portraiture just because it’s easy to continue and make similar work. I think you can get more of a story if it’s more of a person, so that’s what I’m trying to do.

MHD: What’s next for you? What do you have coming up?

Christina: I’m actually working on stuff for Art Basel, I’m doing Super Fine in Miami. I’m trying to do a solo show next year with the series I was talking about, “Lifebloodlust.” Art Village Gallery in Memphis is having a few exhibitions next year, so I’m probably going to do something with that, they like to focus on art of the African diaspora. 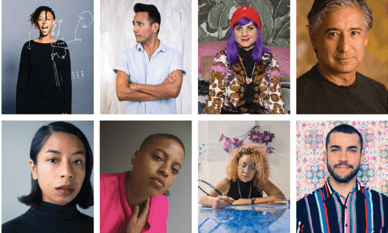