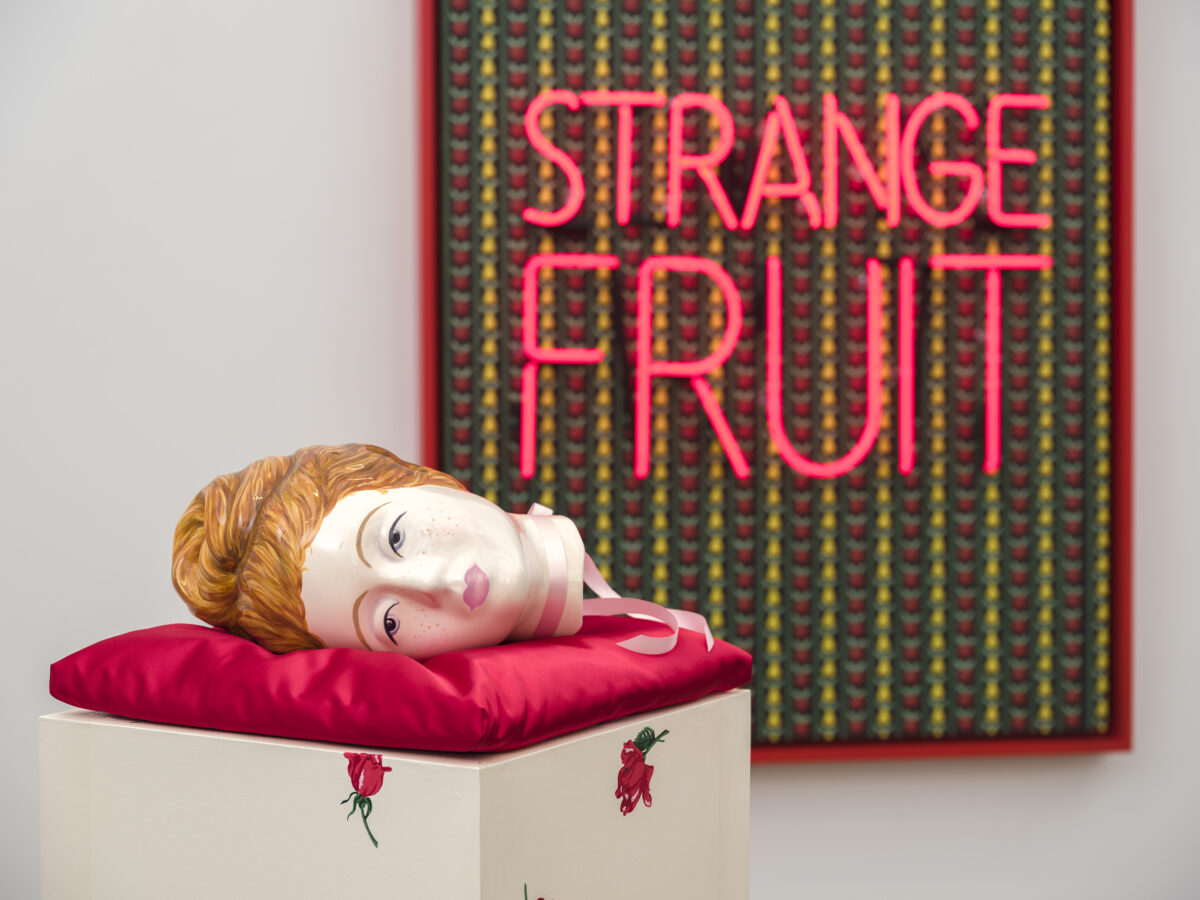 Take a deep breath in. Can you smell the sweet scent of fresh magnolias? Do you see the rows of decapitated Dalton heads with ribboned necks that line the halls like strange fruit? Did their glazed-over eyes and bleach blonde hair confuse the images you prepared yourself to see?

Strange Fruit, the latest exhibition from Genevieve Gaignard presented by Vielmetter Los Angeles, does not employ or exploit the expected tropes or visualizations of racialized violence that you would expect in an exhibition about lynching. Instead, Gaignard’s sculptural, photographic and sonic iterations present trouble and invert the violence to hold those who otherwise would be considered innocent liable.

Southern trees bear a strange fruit. Blood on the leaves, blood at the root. White bodies swinging in the Southern breeze.

Strange as the metaphor of human flesh likened to fruit, it is odd that the deaths of nonwhite bodies rarely elicit a collective empathetic response. If you don’t listen to the lyrics of the antilynching anthem, Strange Fruit (1939), it is easy to be lulled into a state of calm. Strange Fruit on the Juke (2022), a refurbished jukebox installed in the gallery, plays the singular track on an infinite loop that hums throughout the space.

Gaignard commissioned Samantha Farrell and The Big Red Band to conjure a new arrangement of the composition. The most prominent revision replaces the decisive identifier, “Black body swinging in the Southern breeze,” with “white body swinging in the Southern breeze.” The intentional modification of “Black body” to “white body” provokes a critical question that we all already know the answer to—If the body that hangs lifeless among the magnolias is white, are the tenets of democracy more likely to prevail?

1955. Money, Mississippi. A 21-year-old Carolyn Bryant accuses 14-year-old Emmitt Till of sexual assault by swearing the teenager grabbed and whistled at her while expressing crude remarks. Shortly after hearing her accusation, Bryant’s husband and brother-in-law form a lynch mob to kidnap, brutalize and murder Till. News of the child’s death and the triggering image of his open casket usher in a new era for the Civil Rights Movement.

In 1994, during an interview with National Public Radio’s Soundprint program, Bryant admitted that the story she swore under oath was true was a lie. Calls to hold the aged and sickly Bryant accountable were met with more sympathy than outrage. She died of cancer shortly thereafter. To date, no one has been convicted for Till’s murder.

2020. Manhattan, New York. Birdwatcher Christian Cooper politely asks Amy Cooper to put a leash on her dog while inside Central Park, a noted requirement for all visitors. In response to this request, Amy Cooper threatens to fabricate an accusation of harassment against Christian Cooper, saying she will call the police and state that a Black man is threatening her life.

Fortunately, Christian recorded the entire event on his cell phone to affirm that his own life had been threatened, not Amy’s. The recording became a viral video after thousands of people commented on the absurdity and irresponsibility of Amy’s reaction. It is important to note that this occurrence happened the same day as the recorded lynching of George Floyd, two months after the lynching of Breonna Taylor and three months after the lynching of Ahmaud Arbery. Given the recent history and legacy of unequivocal violence against Black people, many who viewed the video understood the wickedness of Amy’s threat—she presumed that the outcome of her false claim would result in the harassment, battery or murder of Christian Cooper, but chose to lie anyway.

Here is a fruit for the crows to pluck. For the rain to gather. For the wind to suck.

Histories of violence mar the possibility of a true democracy—America suppresses but guiltily accepts the proclivity of racialized domestic terrorism. One must read between the lines of grisly white tears to understand the redundancy of this brutal and uncomfortable reality. It is disturbing to confront the truths of our cultural inheritance—we are taught to accept that physical or psychological violence against nonwhite people is permissible. Gaignard challenges viewers to consider our collective indoctrinations regarding power, accountability and identity.

Gaignard told this writer about histories of violence, portraiture and the concepts that her work explores:

“It was a specific challenge that I set for myself. I’m not using the obvious ways to talk about this, so how else do we talk about how these things are consumed? How many different ways can you digest this idea of strange fruit?”

Throughout her esteemed career, Gaignard has used assemblage sculpture, photography and neon signs to query the formations that found identity. Her bent toward nostalgic ephemera is coupled with an insatiable curiosity to mine personal and collective histories. Gaignard’s work rests uncomfortably at the intersections of portraiture, history and recent calls for justice. She masterfully employs found objects that signify. She appropriates misrepresentations—the commoditized stereotypes that historically have been used to humiliate Black people and presents them in active stances, ignited with a renewed agency. 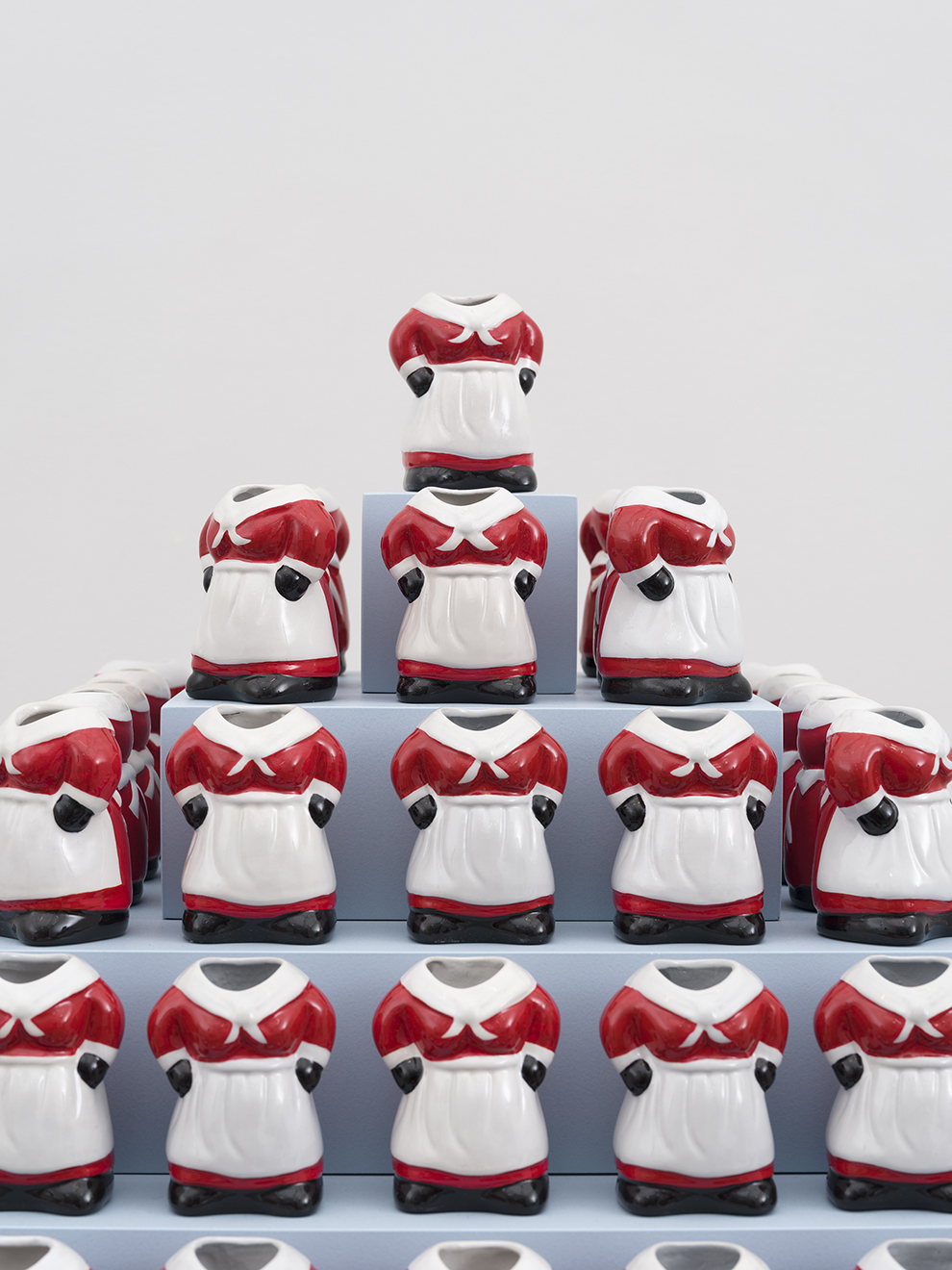 In The American Dream is a Pyramid Scheme (2022), Gaignard arranges 81 headless mammy figurines on tiers atop a plinth. Though headless, the icon is so imprinted in our consciousness that it remains recognizable. By beheading all the mammies and removing what is perhaps one of the most offensive stereotypical images—an ever-smiling domestic Black woman—Gaignard animates and turns viewers’ attention towards their assertive posture: 81 figurines with hands on hips who form a small but powerful pyramid.

In, Off With Their Heads: For the Crows To Pluck (2022), Gaignard transforms herself into a Southern belle adorned with towering beehive hair, rosy, pink cheeks and a layered, white chiffon dress. The artist immortalizes herself by gazing contemplatively into the sky, reclined in a lush garden of white magnolias, roses, wild flora, fauna and kumquats. The pose elicits an established history of portraiture and the ambivalent nonchalance of privilege.

These are the images of white womanhood that we have not only observed for centuries but also have understood to be an unequivocal standard of beauty and purity. It is this propaganda that Gaignard interrogates with a subtle astuteness to the aesthetics of innocence that are so pervasive they rarely are challenged. 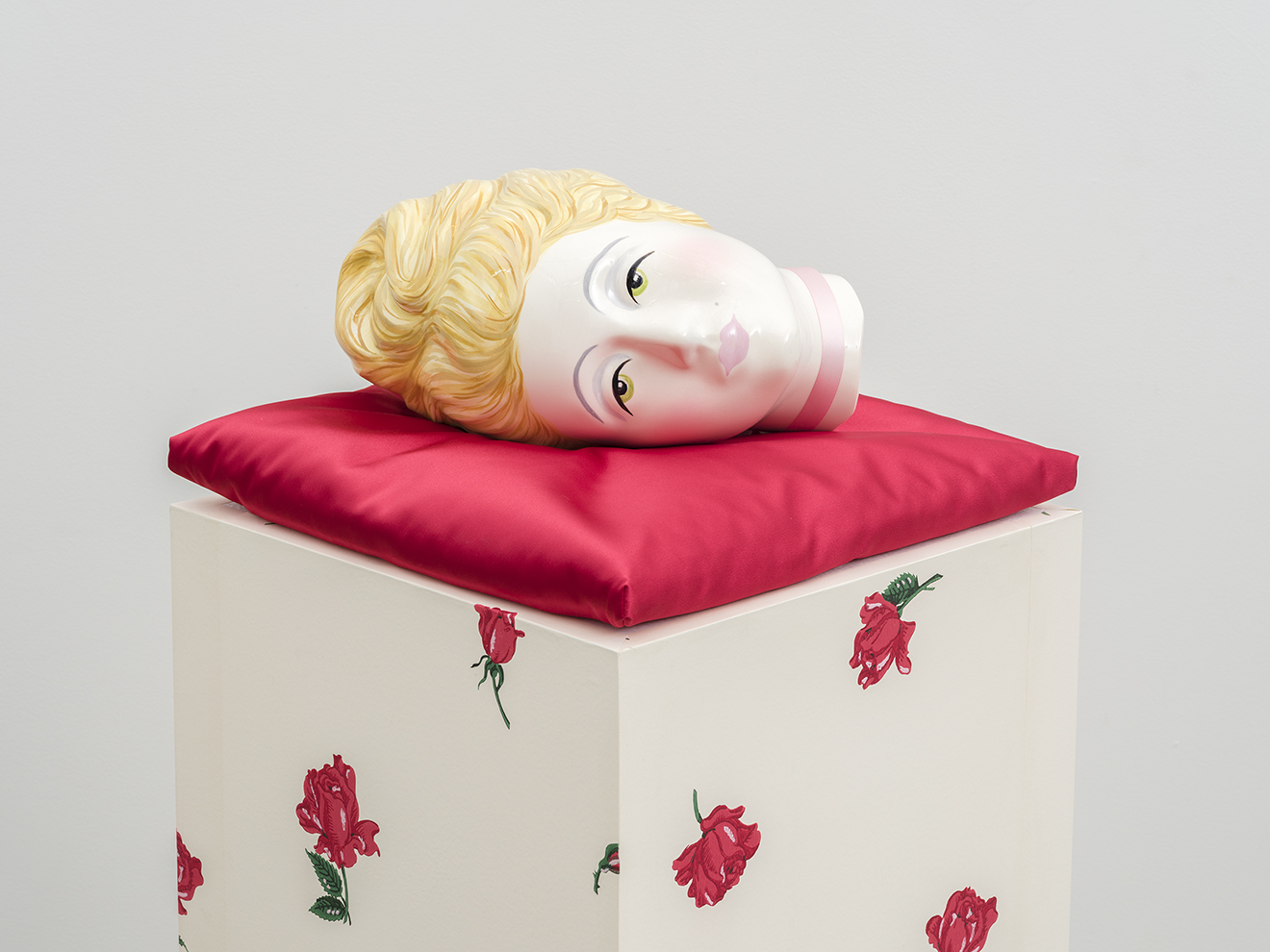 Like The Apple Doesn’t Fall Far From the Tree Golden Delicious (2022), a series that centers a collection of decapitated Dalton heads, each iteration of Southern womanhood that Gaignard portrays is adorned with a ribbon around their neck—a signifier for lynching and an indication of symbolic retribution. By titling each of the Off With Their Heads, portraits after excerpts from the song Strange Fruit, Gaignard draws corollaries between seemingly disparate occurrences—anti-Black violence and the presumed innocence of white women.

For the sun to rot. For the tree to drop.

The beauty of the portraits in the Off With Their Heads photographic series gives onlookers pause—querying the culpability of white Southern women in lynching cases may seem groundless to some. History teaches us to protect white or white-passing women, not associate those women with acts of violence. Gaignard uses this presumption to her advantage by affixing the audience’s gaze to familiar representations of genteel Southern womanhood. Each portrait is meticulously staged—the posture, gesture and ornamentation that Gaignard embodies elicit an overt nod to familiar tropes that endorse presumptions of power, beauty, innocence and wealth.

“Interestingly enough, making the photographs is the hardest part of my practice. Do I have to take another picture of myself? Is it meaningful? I think it roots the work in the personal. Using myself as a vehicle, as a starting point to bounce off these ideas, feels safer in the sense of not pretending to know someone else’s story or the depth of someone’s story, the layers. I almost feel like a slight detachment once the image is made. I think it’s me, but it’s a representation of a bigger story, a bigger meaning.”

Of the nearly 40 new works included in the Strange Fruit exhibition, only two are neon, Strange Fruit in Neon (2022) and Salt of the Earth (2022). Strange Fruit in Neon is installed between two trees at the end of the decapitated Dalton head hallway. The neon-on-panel work emits an eerie, red iridescence. Vintage wallpaper lines the interior of the red-tinged frame and offers a surreal contrast. 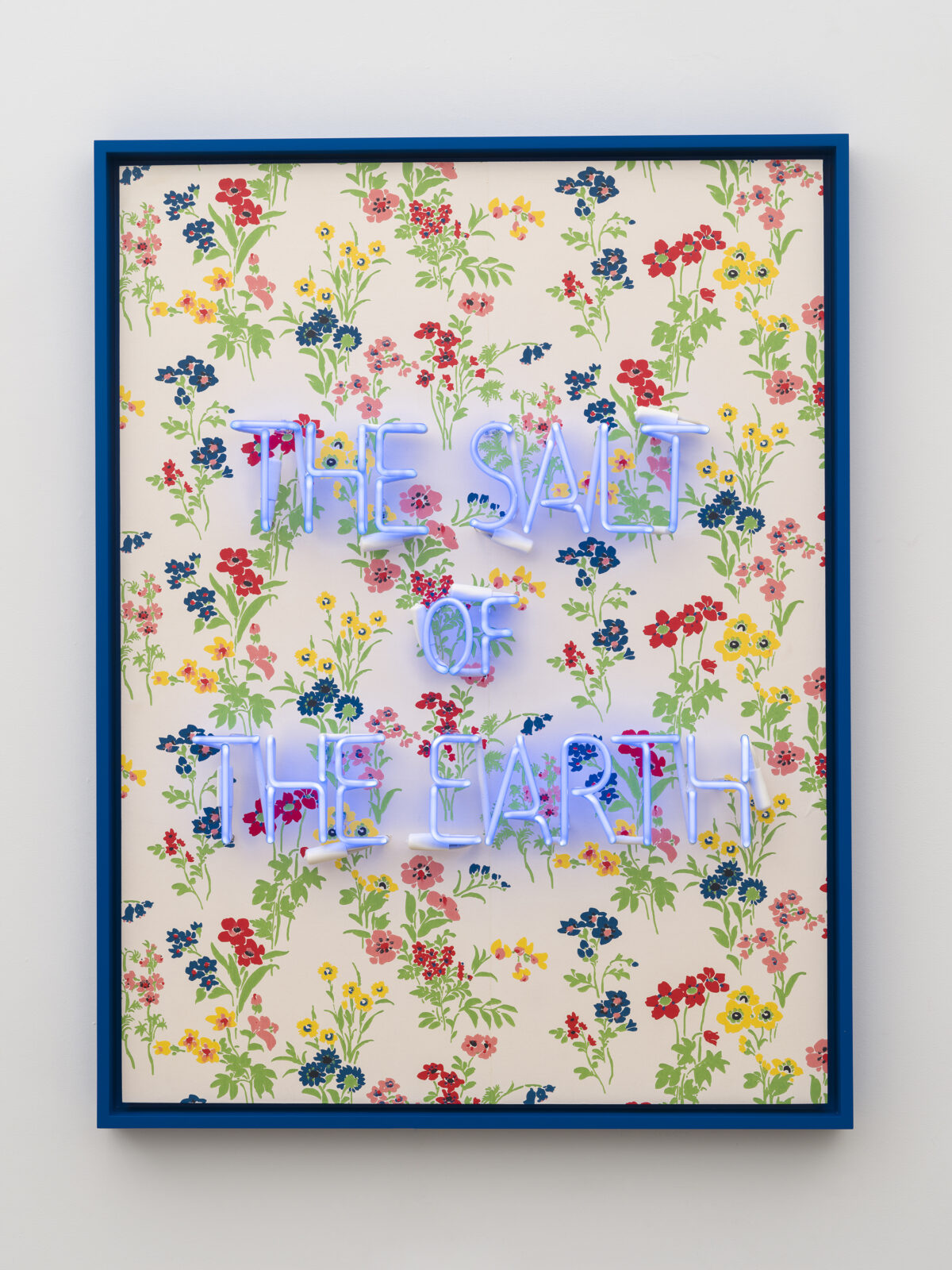 Salt of the Earth employs a similar technique that pairs light-blue neon with vintage flower wallpaper framed in navy blue. Gaignard has featured neons in past exhibitions, and here, they offer slight and unnerving levity. Observing the neons challenges viewers to consider the joy that transcends the tragedy of inequity. Beyond our scarred and scattered cultural memory rests luminescent possibility—the chance to change and choose to move with more humanity. Gaignard takes history, wraps it in hopes warped and revamped through her satirical lens and presents it back to us, like a mirror, so that we can each do the work to rectify past and present wrongs.

“There’s a slipperiness to my practice because I want it to push buttons in this way, so [I use] beauty, whether it’s a standard of beauty or just what I perceive as beautiful, to lure the viewer in. As soon as you know what’s actually going on, then you almost aren’t able to go back to what you originally perceived that thing to be.”

Here’s a strange and bitter crop. 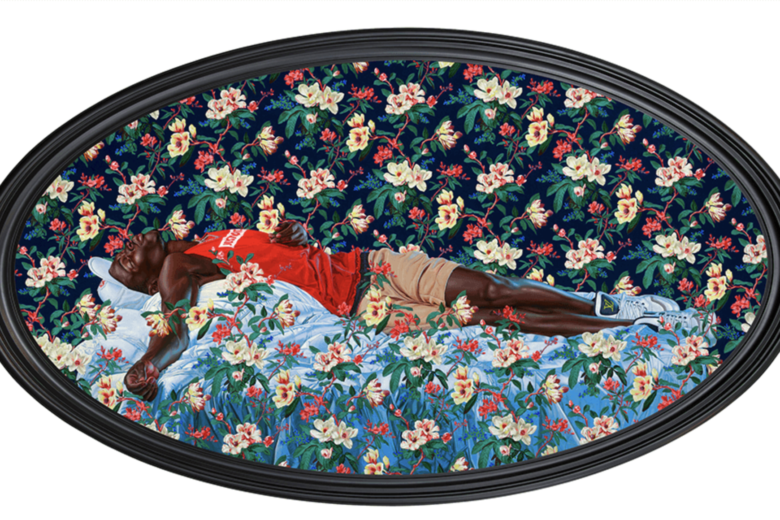