In his performance of “Caldonia”—also the name of a Black woman character with, according to the song lyrics,“big feet”and a“hardhead”— saxophonist and singer Louis Jordan hits a high note that may be most appropriately described as a blue note. The scream/shout is common within the Black Baptist church, and that tradition is evident in the blues. This 1945 song, written by the Black woman songwriter Fleecie Moore, gives this exhibition its title. Caldonia features early- to mid-twentieth century posters announcing the meetings and club dates of musicians as wide-ranging as Otis Redding, W. C. Handy, James Brown, and Aretha Franklin—including the 1945 poster advertising “Caldonia,” which was released on Decca Records by Louis Jordan and His Tympany Five. The exhibition also includes posters for films such as Cabin in the Sky (1943) featuring Ethel Waters and Lena Horne.

This exhibition presents a cultural and historical view of an archive of images of Black performers slowly disappearing from public memory. According to historian Daphne Brooks, the slow fade to black refers to the vanishing archives and memories of Black women musicians, “the point at which they begin to slip out of view and into the void of cultural memory.” Just as we have forgotten how Black audiences were excised from the era of silent film, culture has taken its revenge on contemporary subjects. While many, including scholar Fredric Jameson, argue that culture is inextricably tied to capitalism, historians like Brooks and Thomas Cripps reveal what is at stake when we forget the “urban Black life” and its role in shaping that twentieth-century modernity. Thus, if we address directly the disappearing image of Black cinematic, sonic, and visual art, we might more easily see the importance of considering this archive and poster collection.

To give a picture of the collection: Before 1945, W. C. Handy, the early Gospel composer, is advertised to perform at an engagement at the Armory in Washington, Pennsylvania. Handy gained critical success with songs like “Memphis Blues” and “Saint Louis Blues” shortly after the onset of the First World War. Chick Webb and his orchestra perform with Ella Fitzgerald at Grotto Park, Elmira, New York, on December 28, 1938. Shortly after the Second World War, pianist Thelonious Monk and drummer Art Blakey perform at New York’s Audubon Ballroom on September 3, 1948, and modern trumpeter Fats Navarro and his All Stars headline the Harlem Rockland Palace Ballroom on April 23, 1949. In the following decades, Ray Charles, Roy Brown, and B. B. King play a number of dates at the Mambo Club in Kansas.

The 1945 poster advertising Louis Jordan’s “Caldonia” depicts Jordan with arms outstretched, his saxophone placed across his chest. He wears large pinstripe pants and a pinstripe jacket. The poster’s obvious hand-colored quality, with its artificial coloring against the black-and-white photograph, recalls animation; its multicolor print format (yellow, red, orange, burnt orange, black, blue, army green, purple) has a dizzying kaleidoscopic feeling that anticipates 1960s Flower Power designs. This 1945 poster design—text, hand-colored photograph, and multicolor graphic print— captures the feeling of “Caldonia,” its groove and energy. Both the poster and the song are futuristic, and the link between Jordan’s prescient R&B and later rock and roll was confirmed by the Rock and Roll Hall of Fame, in which Jordan is cited as an “early influence.”

The scream/shout on “Caldonia” showcases the genius of its author, Fleecie Moore. Her absence on the poster and the record is one example of the erasure of Black women, and Black performers generally, within the cultural sphere. Yet Moore’s songwriting would go on to provide a precedent for the screaming/shouting on records like “Say it Loud, I’m Black and I’m Proud” by James Brown, and even “We Will Rock You” by Queen.

The exhibition showcases the larger twentieth-century American cultural zeitgeist in which visual, cinematic, and sonic arts existed in dialogue— particularly apparent in the visual art of Louis Armstrong. In his hundreds of “scotch tape” collages, Armstrong juxtaposed photographs of himself, and other musicians like Jelly Roll Morton, with his own handwriting and newsprint clippings. In highlighting Black artistic production across mediums, Caldonia presents Black performers within an expanded cultural and historic frame.

In the exhibition’s selection of eight Armstrong collages, my intention is to foster a broader understanding of Black musicians and Black culture within mid-twentieth-century America. I am particularly interested in the trumpeter’s relationship to cut-and-paste methods, as well as to techniques of composition. A number of commentators suggest that Armstrong himself did not see these as “works of art,” instead using words like “leisure” to describe his practice of making collages. Despite this fact, I am interested in these works as “composite texts” that combine aspects of sonic and visual practice—a sensibility echoed in the exhibition’s poster collection. 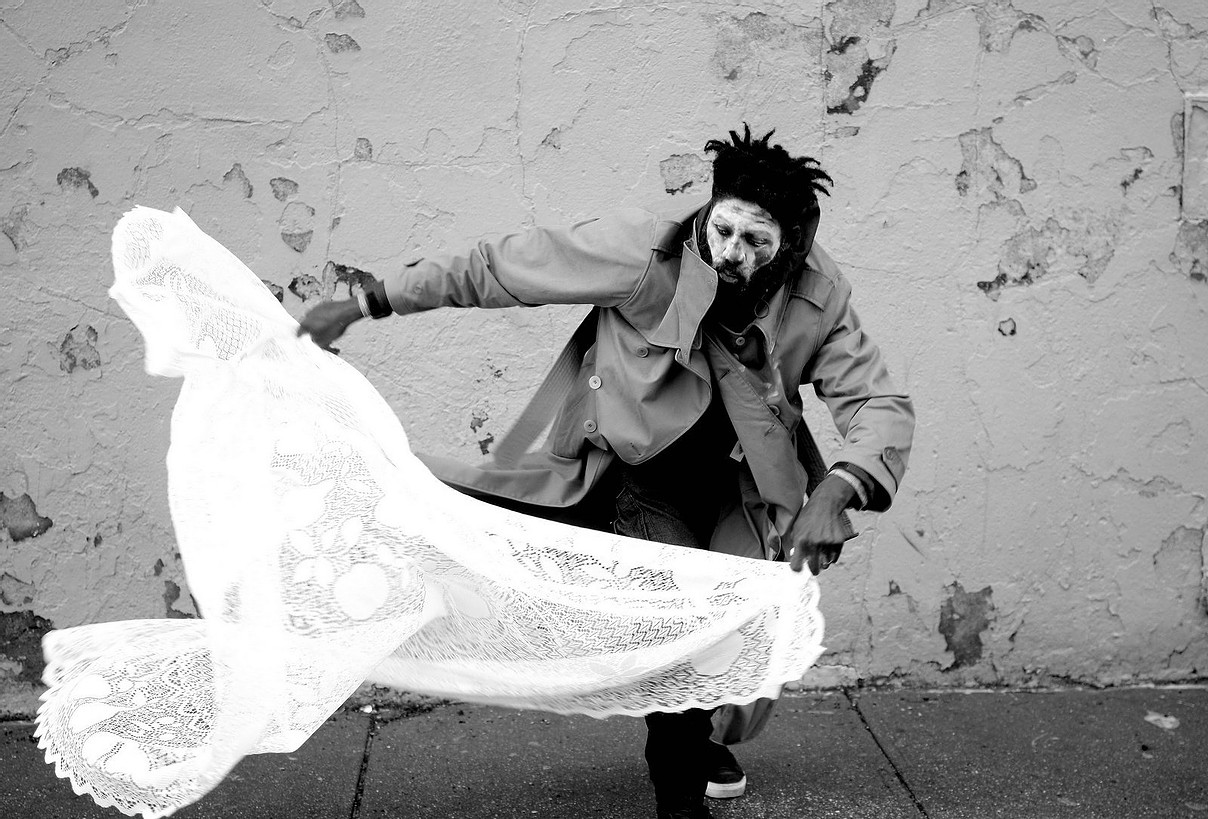 Nyugen E. Smith and Others Lead Events at SAIC A Conversation with Jumaane N’Namdi by Charles Moore