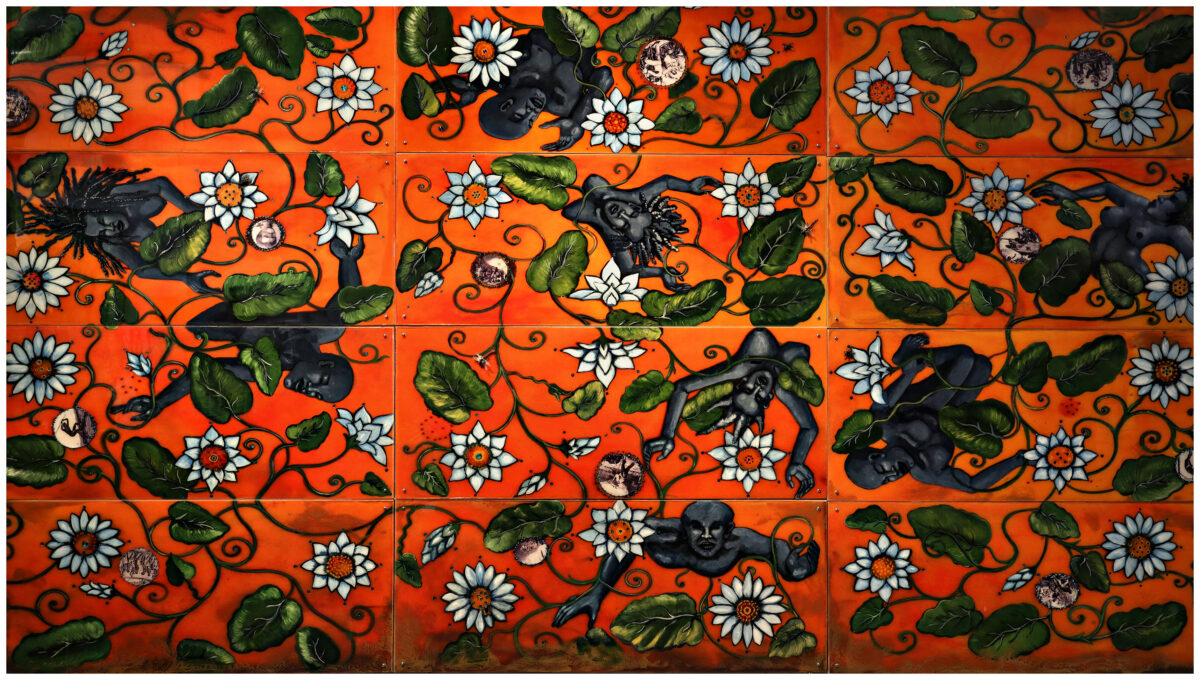 In the first quarter of 2020 the unprecedented corona virus pandemic immobilized the globe. The outbreak prompted massive closures following strict government orders to shelter in place. Municipalities, businesses, cultural institutions, universities and schools shut down. The post-pandemic world quickly scrambled to stay in motion and informed. Technology made it possible for workers to telecommute; for social media dance parties to go viral and video conferencing to become a standard form of communication. The closures disrupted countless happenings, from Major League Baseball to major art fairs. Pérez Art Museum of Miami (PAMM) was no exception. Allied with Power was scheduled to open April 24, 2020 and run until July 26, 2020. In compliance with public health directives, the museum closed on March 16th with no foreseen date of reopening. Allied with Power curated by Maria Elena Ortiz, organizes artwork from the collection of Jorge M. Pérez by artists from Africa and the African diaspora. It poses a nexus of artistic ideas and concepts linking Black people from around the world to shared experiences. The interview with Ms. Ortiz was on May 13th to inform this article. Less than two weeks later, massive outrage prompted international protests and uprisings following the police murders of George Floyd, Breonna Taylor and Ahmaud Arbery. The global response to unequivocal racism and violence proves how Allied with Power aligns with the current outcry of the Diaspora, seeking to increase visibility on the lives of Black people.

In 2011, the Miami Art Museum announced that following the completion of its expansion, it would be renamed Jorge M. Pérez Art Museum of Miami-Dade County. The renaming was in honor of Mr. Pérez’s $20 million dollar gift in support of the expansion and his continued commitment to the institution. Mr. Pérez is a vigorous art collector, particularly from artists in Latin America. Recently, his interest has expanded to include artwork from artists representing the African diaspora. Allied with Power presents 39 selections from his burgeoning collection of African Diasporic art. It features artists from the Caribbean, Africa, North and South America.

Allied with Power is literal. It relays the message that strength is in unity, unity of experience, voice and action. The artist’s featured in the exhibit each have origins in colonized and slave trading geographies. Allied with Power proves timely in the current moment when a global awakening to the Black experience is unfolding. Themes of identity, colonialism and resistance emerge simultaneously with notions of culture, spirituality and joy.

Africa is the birthplace of humanity. The oldest known human remains dated from 300,000 to 350,000 years, were excavated in Morocco. It’s safe to assume Black women are the mothers of civilization and have nurtured millions of generations of people. Firelei Báez from the Dominican Republic exalts this legacy with her composition Untitled, which includes the orisha Oya. Known as the warrior deity, Oya is characterized by action. Painted in a semicircle around her are notable figures of Black women. The color palette of cool, pastel, purple and blue create a misty dream field. Oya, at center, spins gifts to them in a sea of brilliant yellow, with accents of pink and white flowers. The women are pensive, prayerful and jubilant. Like the ancestors, they exist in another realm but their impressions endure in the present. Their value is unquestionable.

La Triste Histoire des Ambaglos (The Sad History of the Underwater Spirits) by Edouard Duval-Carrié is eerily enchanting. Born in Haiti his work frequently incorporates elements of spirituality and history. La Triste Histoire des Ambaglos honors the lives and souls of Africans lost during the Middle Passage, either voluntarily jumping overboard or being cast off as useless cargo. Dark bodies of men and women float weightlessly among white daisies twirling from green vines and leaves. In contrast, the painting’s background is blazing, fire, orange giving the figures and botanicals a supernatural power. Duval-Carrié acknowledges these ancestral beings by also placing small circular black and white photos of slaves sourced from books and other media. This work recalls one route in the course of the diaspora. The slave route was tragic to the continent that lost generations of people and devastating to those who lost their lineage to Africa.  La Triste Histoire des Ambaglos offers a graceful peace, in remembrance of them.

Brazilian artist Sonia Gomes’ Untitled deploys visual language and materials associated with African art. Historically the use of wood was common for artisans. Often utilitarian footstools or spiritually charged figures and masks were made of wood. Gomes adorned two sheets of wood with bold blue and white patterns, a neutral yellow and vociferous red geometric shapes. The wood sheets are curved and visually coupled though delicately separate. The artist also included her signature knitting techniques by incorporating a threaded component in the work. The thread provides a multidimensional alternate to the two dimensional patterns. The complimentary curve between the two sheets of wood betray their compatibility. The two may have once been one. The colors, shapes and patterns on each are related but uniquely different, much like Black people of the Diaspora.

The Door to Revolution by Nigerian artist Odili Donald Odita is a portal of fractured color. Acute shreds of bright red, yellow, and blue break into each other. Pink, brown, gray and green slice at sharp and flat edges. The composition crafts three distinct triangles of color creating an entry point for the eye to place the doorways threshold. It’s colorful chaos. It’s noise. It’s teeth and shears. The lines are targeted in all directions but contained within the picture frame. What’s on the other side of The Door to Revolution?

Naudline Pierre is from the U.S., her work titled Close Quarters is a striking, surreal investigation of the body and spirit. At the foreground is an orange silhouette of a feminine figure with her back to the viewer. A luminescent winged spirit with long black tresses springs from the dense black background. Her dark hair drapes over the arm and shoulder of the orange woman. A glowing yellow illuminates at the center of the angel. The two hold each other close. The chin, lips, nose and one eye of the angel is visible. Is she looking into the eyes of the viewer or the orange figure whose legs are bent at the knee? A third face, much like the angel lies in the lap of the orange woman. Easy brushstrokes render long tendrils of hair across the thigh. Subtle blue bursts of light appear from above the figures, one ball glows light from the index and thumb of the angel’s free hand. The artist is exploring personal intimacy, the knowing and loving of oneself. The darkness represents the place within, where the light dwells. It’s a reminder of self-love and a willingness to hold on to that which may be intangible or distorted.

Allied with Power resonates with the voice of today. The artwork in the exhibit sequences harmony in the lives of people in the African Diaspora. It represents flavors of similar experiences, in struggles and triumphs. It reveals the role of artists as bull horns for places and moments. This exhibit also reveals the importance of individuals like Mr. Pérez, who support art and art institutions. Allied with Power is on trend, but aims for longevity with regard to the integration of Black narratives in art and beyond. Artists like Deborah Roberts, Chéri Samba, Yinka Shonibare CBE, Kara Walker, Zanele Muholi, Sam Gilliam, Stanley Whitney, Hank Willis Thomas, and more, offer significant dialogue to the creative conversation unfolding in this exhibition. Allied with Poweris on the horizon, be prepared. 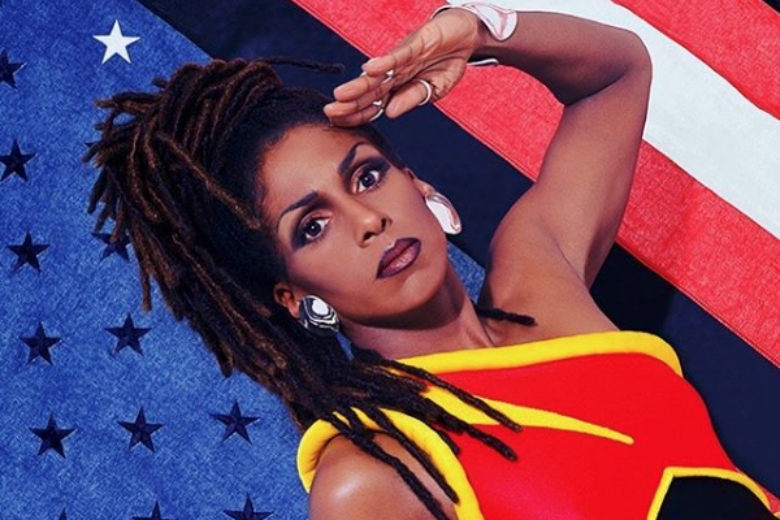 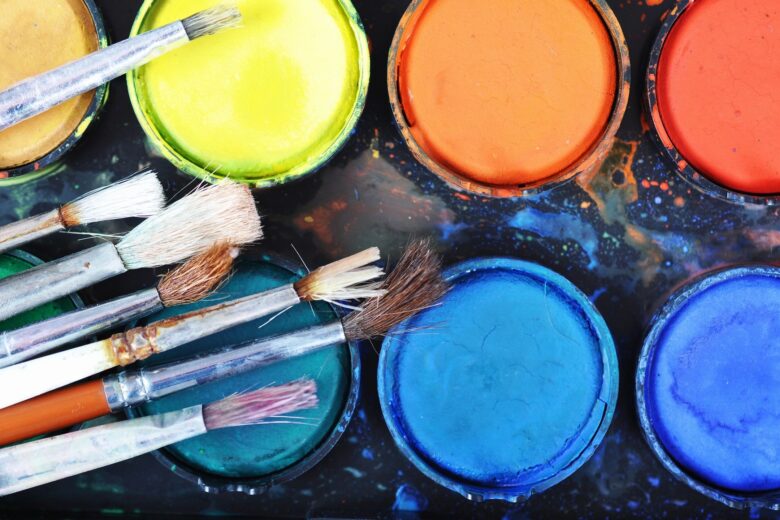