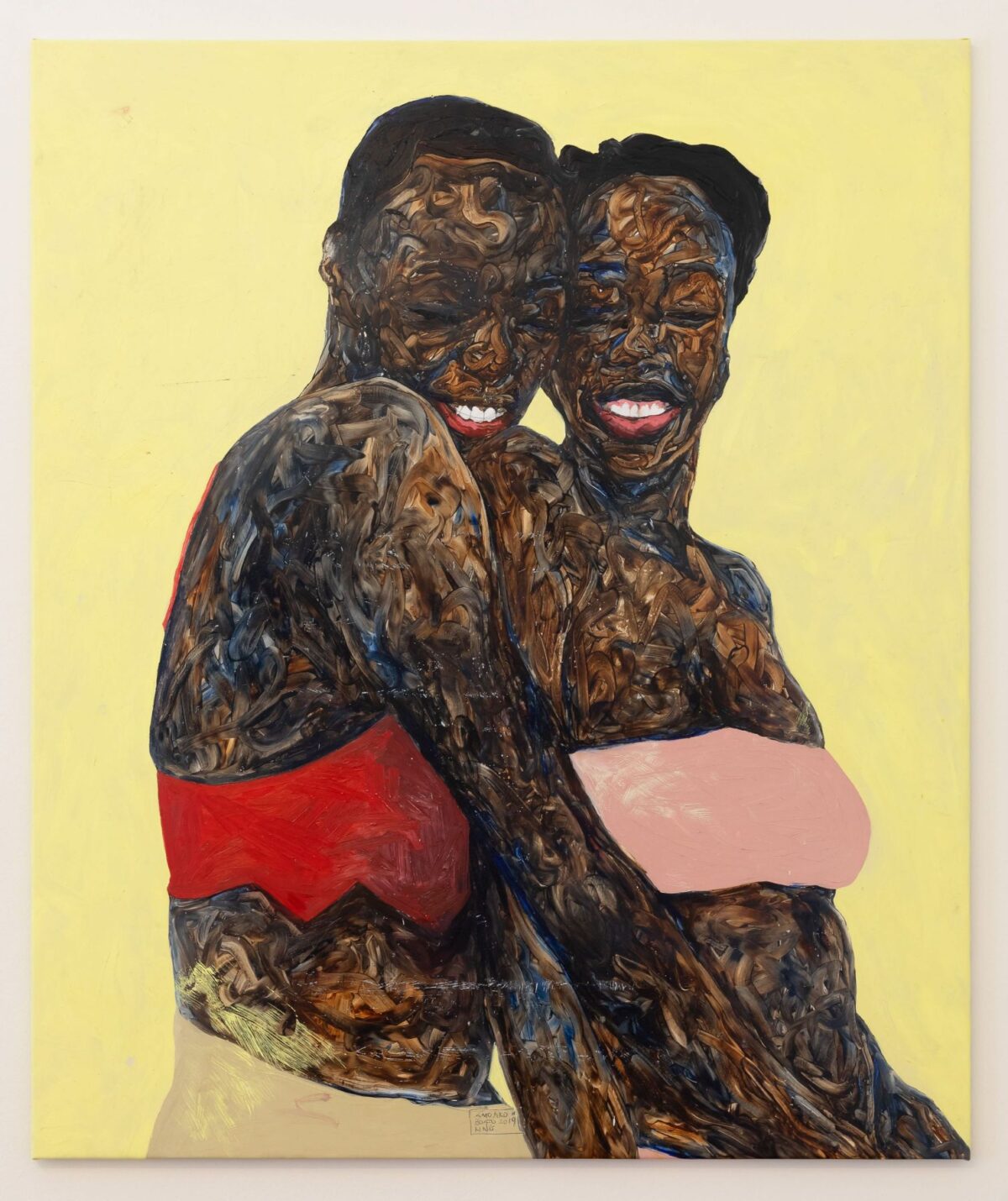 This week in African art and culture, Gallery 1957 in Accra, Ghana is showing a group exhibition featuring some of Accra’s renowned young portrait painters. Still reeling in awards and continuous acclaim, Burna Boy yet again has been nominated for a prestigious music award. A South African film maker and director has pushed boundaries in an experimental presentation fusing poetry and film. Finally, some of Africa’s favorite writers are up for a number of prestigious prizes. 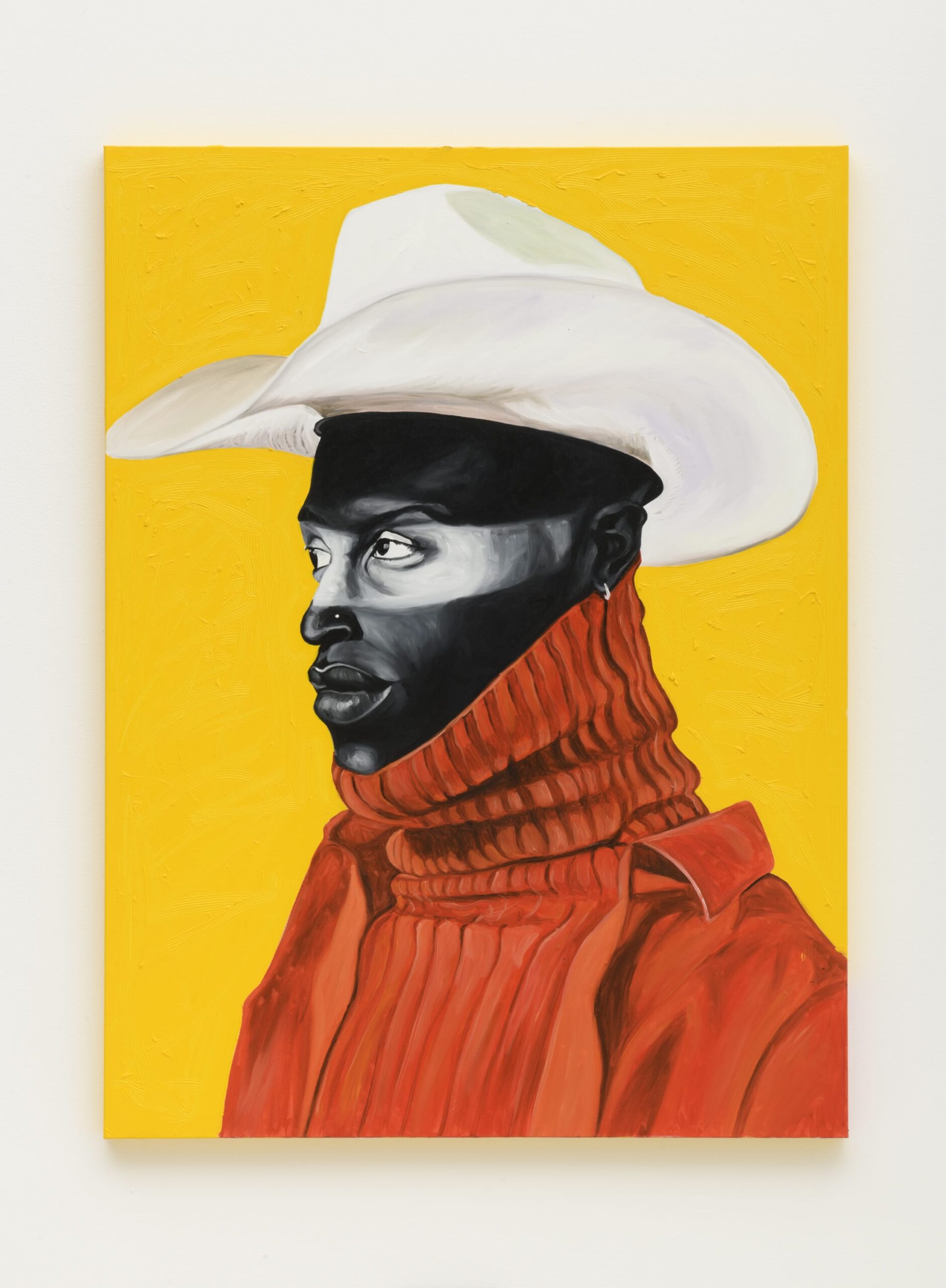 Amoako Boafo, Kwesi Botchway, and Otis Quaicoe in Homecoming: The Aesthetic of the Cool at Gallery 1957, Accra

At Gallery 1957, a new and exciting exhibition, titled Homecoming: The Aesthetic of the Cool is on view. Simultaneously celebrating the gallery’s fifth anniversary, the exhibition showcases new works of Amoako Boafo, Kwesi Botchway and Otis Quaicoe for the first time together in a group presentation in Accra, Ghana, which also happens to be the birthplace of the artists.
These artists also share an affinity to explore the concept of identity—what it means to be Black, African, and a contemporary artist in the 21st century. All three artists were born and raised in Ghana, all educated at Ghanatta College of Art and Design in Accra, and all are ascending with unparalleled critical and commercial success at a record-breaking pace. Art writer and historian Danny Dunson describes their approach to art as follows: “Boafo stands as the poetic innovator and critical groundbreaker, trailblazing for the entry of his young contemporaries; Otis Quaicoe, the elegant visionary and quotidian storyteller, and Kwesi Botchway, the romantic illusionist and regal myth maker.”
The artists explore portraiture as a form to address issues on Black identity in contemporary times, literally. Their subjects are often elegant and fashionable with sinuous bodies making strong poses emphasizing their confrontational gaze.
Homecoming: The Aesthetic of the Cool is on view until May 9, 2021.

Burna Boy Nominated for International Male Solo Artist at 2021 BRIT Awards
Apparently, the rave is not over for Afro-fusion star Burna Boy. He has secured yet another nomination at the 2021 BRIT Awards in the U.K. ahead of the main ceremony slated for the O2 Arena in London on May 11.
First held in 1977 and simply referred to as “the BRITs, ” the awards platform is the British Phonographic Industry’s annual celebration of popular music. Traditionally held in February, the ceremony this year has been delayed due to the COVID-19 pandemic.
The list of nominations, which was made public recently, saw the Nigerian singer shortlisted in the International Male Solo Artist category for the second consecutive year alongside The Weeknd, Bruce Springsteen, Childish Gambino and Tame Impala.
At last year’s edition, Burna Boy joined British-Ghanaian act Stormzy for a performance of the latter’s Own It.
This development adds to Burna Boy’s impressive streak of accomplishments this year. It comes days after the Ye hitmaker was bestowed with the Distinguished Service Star of Rivers State medal in his hometown of Port Harcourt. It also arrives on the back of Burna Boy’s historic Grammy win last month.
Other nominees of African descent include Stormzy, Headie One, KSI and J Hus, whose sophomore studio album, Big Conspiracy is nominated for Best Album.
Comedian Jack Whitehall is scheduled to host the 2020 ceremony for the fourth year running, paralleling a record set by fellow funny man James Corden.
Jabu Nadia Newman Releases Visual Poem The Dream That Refused Me
South African writer and director Jabu Nadia Newman has released an Afrofuturistic poetic film that reframes Black culture. Titled The Dream That Refused Me, the poem explores the current shifts taking place in South African Black culture. The visual poem is but one chapter in a four-episode series that dives deep into Black aesthetics, culture and ritual.
The Dream That Refused Me calls out Black consciousness to the corrupted modern ways of living. The film’s scenes seamlessly shift from the wilderness to the online space where social influencers dominate. The director has described the film as an Afrofuturistic satire that takes a critical but comical look at the commodification of emerging trends in Black culture.
The Dream That Refused Me keeps the integrity of African storytelling through spoken word and gives life to it with an Afrofuturistic lens. Newman shared her directorial approach with us saying, “I wanted to take something as ancient and intrinsically African as storytelling to create a modern and contemporary film.”
Newman burst onto the filmmaking scene with the 2016 hit web series The Foxy Five, an intersectional show focusing on the lived realities of young Black women in Cape Town. The Dream That Refused Me was created in conjunction with the cultural platform Nowness as part of the No Direct Flight series, which describes itself as exploring the aesthetic of the African diaspora. 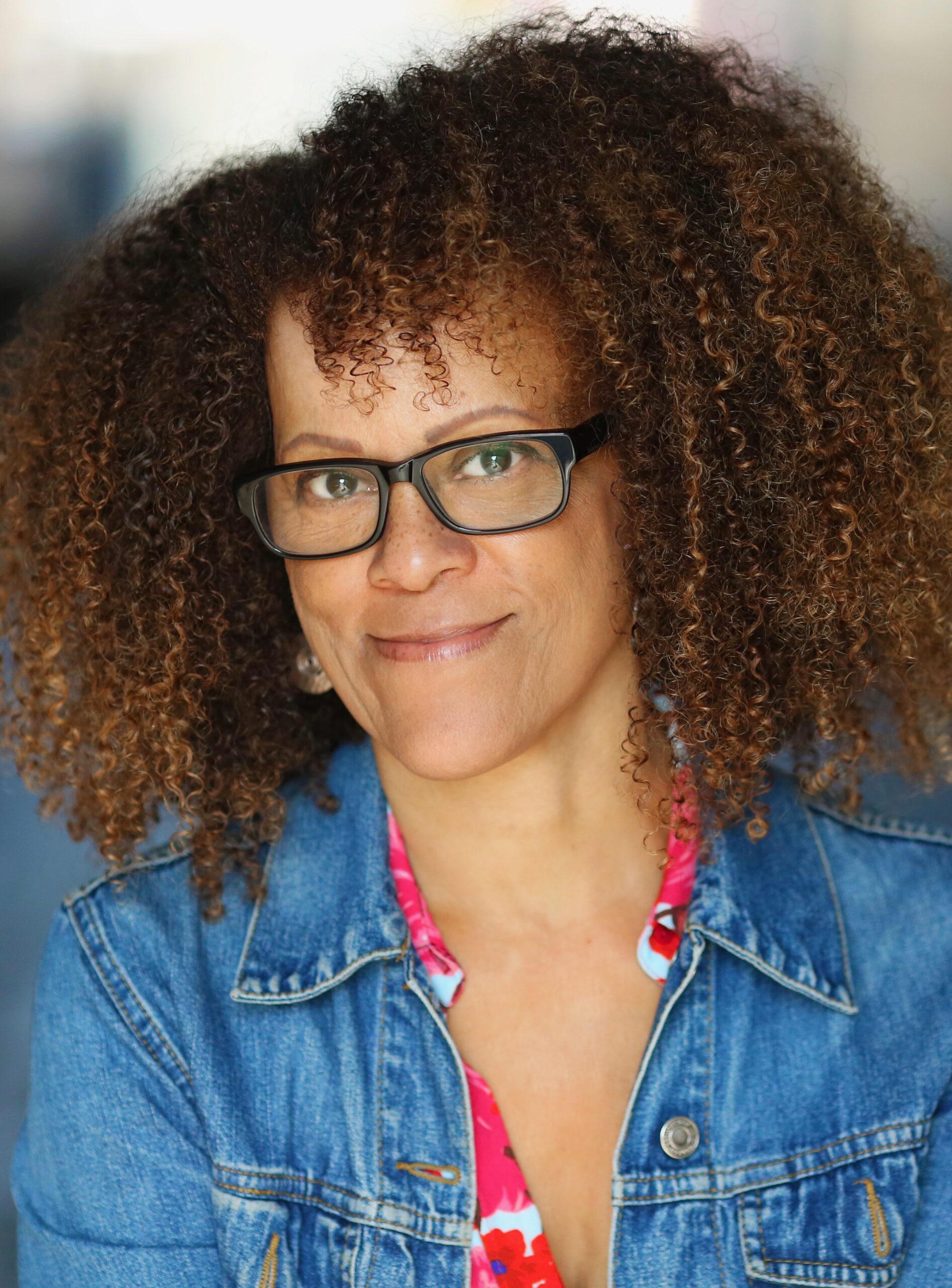 Above: Bernadine Evaristo, via Wikipedia.

Bernardine Evarist and Colson Whitehead are on the shortlist for the Dublin International Literary Award 2021, announced on March 25, 2021.
The Dublin International Literary Award is awarded annually for a novel written in English or translated into English. The prize worth €100,000 (U.S. $117,778) and sponsored by the Dublin City Council, Ireland, is the richest prize for one work in or translated into English. African writers including Scholastique Mukasonga, Chimamanda Ngozi Adichie and Mahi Binebine, Aminatta Forna and Noviolet Bulawayo, Mia Couto, Chinelo Okparanta and Yewande Omotoso have been nominated in the past.
In 2021, the judging panel is comprised of professor Chris Morash as the non-voting chair alongside Jan Carson, a writer and community arts facilitator based in Belfast; David James Karashima, an author, translator, and associate professor of creative writing at Waseda University in Tokyo; Lebanese-born Dr. Rita Sakr, who lectures in postcolonial and global literatures at Maynooth University; Dr. Martín Veiga, a Cork-based Galician poet, translator, and academic who lectures in Hispanic studies at University College Cork, and Enda Wyley, an Irish poet, author and teacher who has published six collections of poetry. The longlist of 49 books nominated by 69 libraries around the world was announced on Feb. 4. The shortlist of six books includes two writers of African descent: Girl, Woman, Other by Bernardine Evaristo and The Nickel Boys by Colson Whitehead.
Patron of the Award, Lord Mayor of Dublin Hazel Chu, praised the award for breaking down barriers through literature by inviting people around the world to read books translated from different languages and cultures: “I am so excited about our Literary Award again this year. Literature time and again has one objective, and that is to explore the human condition, teaching us something new about others, and ourselves. These are powerful and timely stories set in both familiar and unfamiliar countries and cultures. I urge everyone to read as many of these thought-provoking books as you can. Readers have plenty of time to pick their own favorite between now and May 20.” The winner of the Dublin International Literary Award 2021 is to be announced by its Patron, Lord Mayor Hazel Chu on May 20, 2021.

Ngugi Wa Thiong’o and David Diop are on the longlist announced on March 29, 2021 for the Man Booker International Prize 2021.
The Man Booker International Prize is awarded for a single book, which is translated into English and published in the U.K. every year. The work of translators is equally rewarded, with the £50,000 (U.S. $69,109) prize divided between the author and the translator of the winning entry. In addition, each shortlisted author and translator will receive £1,000 (U.S. $1,382) each. A total of 126 books were considered.
The longlist announced by this panel features 13 books published last year. From these, the two African writers and books featured are The Perfect Nine: The Epic Gikuyu and Mumbi by Ngũgĩ wa Thiong’o, translated from Gikuyu by the author, published by VINTAGE, Harvill Secker and At Night All Blood is Black by David Diop, translated from French by Anna Mocschovakis for Pushkin Press.
The judging panel for the 2021 edition is chaired by cultural historian and novelist, Lucy Hughes-Hallett. She leads a panel consisting of journalist and writer, Aida Edemariam; Man Booker-shortlisted novelist Neel Mukherjee; Professor of the History of Slavery Olivette Otele; and poet, translator, and biographer George Szirtes.

Lucy Hughes-Hallett says: “In a year when we could scarcely leave our own houses, we judges have been crossing continents, transported by our reading. Every book we’ve read is unique. However a theme does emerge—migration, the pain of it, but also the fruitful interconnectedness of the modern world… Not all writers stay in their native countries. Many do, and write wonderful fiction about their hometowns. But our longlist includes a Czech/Polish author’s vision of a drug-fueled Swedish underworld, a Dutch author from Chile writing in Spanish about German and Danish scientists, and a Senegalese author writing from France about Africans fighting in a European war.”
The shortlist for the prize is scheduled to be announced on April 22, 2021, and the winner is slated to be announced on June 2, 2021 in a virtual celebration from Coventry, City of Culture 2021. 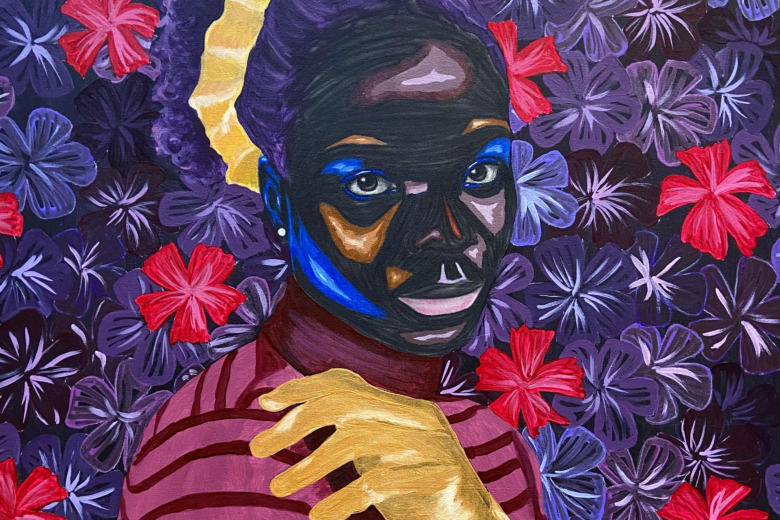 Lagos, Nigeria-based artists Adegboyega Adesina and Johnson Eziefula are brought together for a joint show by Destinee Ross-Sutton and the Ross-Sutton Gallery