On March 19th, the exhibition Somewhere Under the Rainbow / The Sky is Blue and What am I formulated by mixed-media artist Alteronce Gumby premiered at the Charles Moffett and False Flag art galleries in New York, where the exhibition will be shown until April 25th. Comprised of fifteen works ranging in size from 12 x 12 inches to 6 x 6 feet, the collection delves into the notions of light, perception, race, and identity. The works seek to reimagine mid-century geometric abstraction and embody the monochromatic painting tradition, taking advantage of the style’s exploration of color.

Using materials such as glass, gemstones, crystals, paint, and resin to bring the artworks to fruition, the works in this exhibition conceptualize “the vastness of the cosmos and the universe,” as Gumby describes, while challenging perspectives on perception and color. The collection has a strong thematic connection to the sky, space, the universe, and light and color. When using gemstones, the artist reveals that “the placement of the gemstones are mapping out my soon, moon, and rising astrology signs, which are Libra, Sagittarius, and Capricorn” which he then abstracts with the addition of more gemstones and materials, creating asterisms (aka clusters of stars) and truly reflecting the appearance of space.

Above: Alteronce Gumby, How Long, Not Long

In this exhibition, a series of five artworks adhere closely to the celestial theme. They comprise the Moonwalker series, a name borrowed from Gumby’s signature design elements whereby his paintings are presented on zigzag-shaped panels, thus earning the name Moonwalker in 2017. Each of the artworks in this series contains up to forty uncut gemstones embedded in the panels alongside painted glass before being sealed with acrylic. While other artworks in the exhibition appear to have a painted finish instead, the crushed gemstones are still featured within the paint itself, such as in the painting False Flag—the largest work in the collection, standing at twenty-four feet tall.

The materials that Gumby uses allude even more strongly to the interconnectivity of the universe. The artist purports that rocks and gemstones are “a container of the history of this planet,” as they are formed for millions of years in the earth and are composed of atoms and elements that existed long before that the earth in space. In this collection of works, lapis lazuli, ruby, amethyst, quartz, fluorite, tourmaline, and citrine are some of the stones Gumby used as embellishments, chosen based on “their relationship to color and energy.” Moreover, when using quartz, the artist charged them for several days in the sun before mixing them into the painting’s ground, forming the first coat of the work before layering darker-toned materials over the top. The vast majority of the painting work is done with the artist’s fingers, using minimal brushwork except when painting the glass before the shards are shattered and embedded in the artwork. While the stones reference the history of the universe, Gumby highlights that the paintings containing raw gemstones cast in resin are “referencing the history of abstraction and the history of color all at once.” Simultaneously but in contrast, pieces such as the Moonwalkers seem to be “leaping forward” in time, appearing to document the history of the future. 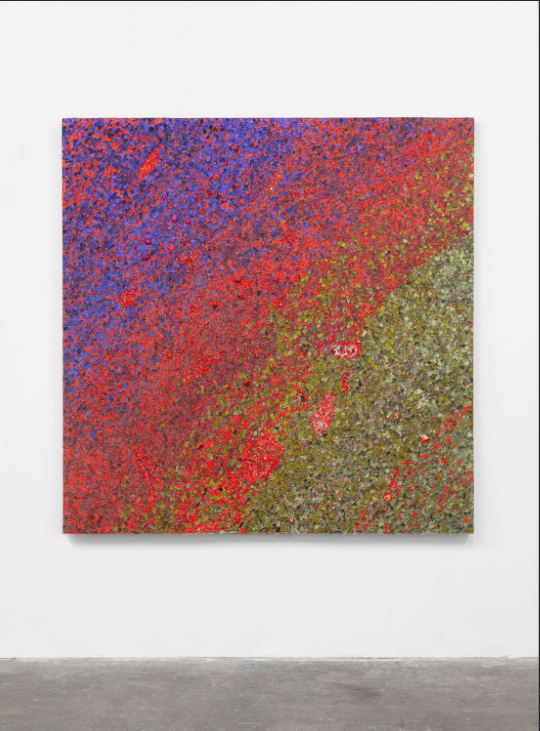 The other significant themes explored in this exhibition are color and perception. The exhibition title Somewhere Under the Rainbow / The Sky is Blue hints at the artist’s objective of highlighting the inherent subjectivity of perception. The artist notes that it is “a societal given that the sky is blue,” though this isn’t the case in bad weather or at night, and the only reason we believe it to be blue is because that is the color we perceive when light is “cast across our atmosphere at a certain angle from the sun.” Moreover, when the sky is viewed from different places on Earth, it appears differently depending on where on the planet you are standing, which the artist loves as a metaphor for life, as it accounts for the unique way in which “every person views the world.” This momentous concept highlights the exhibition’s emphasis on the significance of perception. The works within the collection reflect this exploration, as a spectator can view a number of the artworks from one position and see a specific spectrum of color that then shifts when they move to another position and view the work from a different perspective due to the layering of different-colored materials. This is particularly evident in the artwork titled Amazing Grace, a six-foot-tall piece of art in which Gumby admits he attempted to “remix the rainbow,” so titled because of the titular song’s lyrics: “Was blind / but now I see.” With this title, Gumby pays homage to the eye-opening artistic process, saying that “every time he makes a painting, it opens up his perception of color or ideas around color.” Likewise, Gumby’s reimagining of the rainbow underscores the subjectivity of the natural phenomenon. The artist philosophizes that rainbows would look different and contain distinctive colors when viewed on another planet or in a different galaxy, as each star “has its fingerprint in terms of the color palette.” The specific rainbow that we see, then, is only one iteration and is likely specific to our sun. The artist draws attention to how humans have categorized the rainbow, chopping up and defining the spectrum of color into seven categories despite the innumerable shades present in the rainbow, observing that “we radicalized color.” 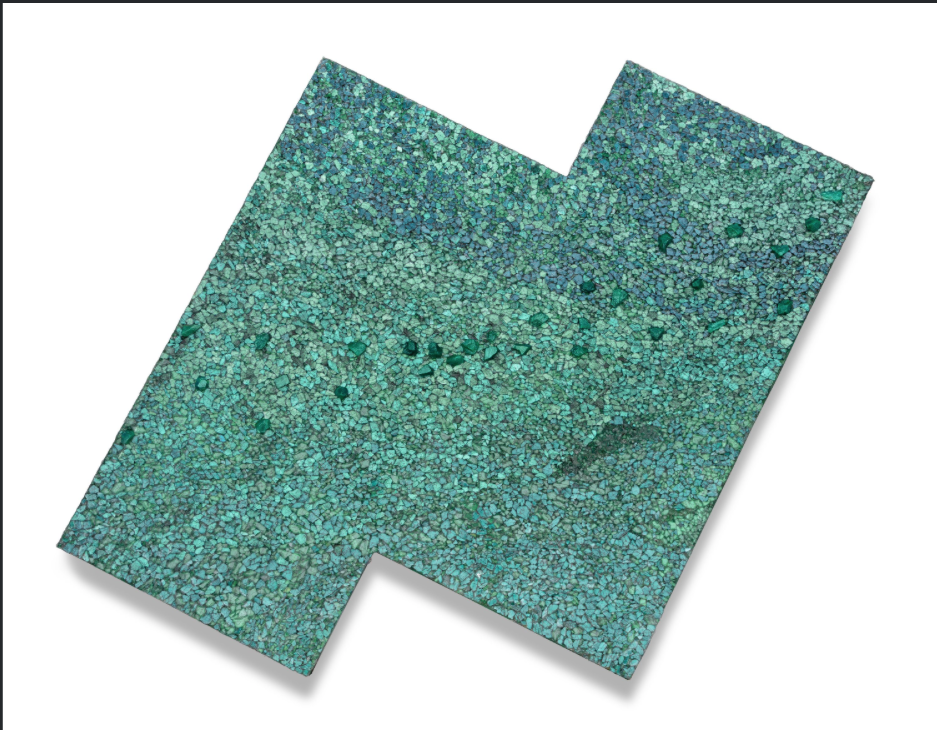 Above: Alteronce Gumby, It’s not easy being Green.

Accumulatively, these themes encourage and facilitate a conversation about color and perception. Gumby refers more directly to race in a performance that merges the artwork’s aesthetic in the exhibition, the artist’s spoken word, and a percussion accompaniment performed by Julliard professor Jerome Jennings. The artist also challenges the perception of Blackness in his artworks. The black hues present in some of the exhibition works layered many materials of various shades, including glass, crystal, gemstones, or an underlayer of material painted over with black paint. With the wide range of shades of black in this exhibition serving as a prime example, it’s easy to see why the artist believes that black is the most unique and diverse color, as it often contains a multitude of other colors.

One of the more unlikely inspirations fueling the works in the exhibition is the Power Rangers—a childhood passion of the artist’s. So much so, in fact, that the children’s TV show inspired the sequence of color in the Moonwalker series. As both the leader of the Power Rangers and the character with the “most diverse ethnicity” of all the members of the group, Gumby reports that the Red Ranger had a “huge influence” on him as a child. Gumby further references the Rangers and draws attention to their distinctly colored uniforms as well as the fact that they came together despite their different ethnic backgrounds. The show centers on the Rangers “coming together to overthrow an evil”—a concept that represents an ethical, international unity that inspires the artist.

Somewhere Under the Rainbow / The Sky is Blue and What am I is a simultaneous exploration of color, perception, and identity, drawing inspiration from astrology, cosmology, and the universe both aesthetically and semantically. The exhibition uses these concepts as a springboard to discuss the perceptions of color and race in our society while highlighting the subjectivity of perception itself. In relation to the stars, which heavily inspired the artworks in this exhibition, Alteronce Gumby states that historically, they have been utilized “to chart across large bodies of land and water.” Likewise, he admits to “using the stars to find my place within the cosmos,” as creating the artworks in this exhibition have allowed him to “expand [his] own horizon to see things in a new light, in a new scale, and with new meanings.” 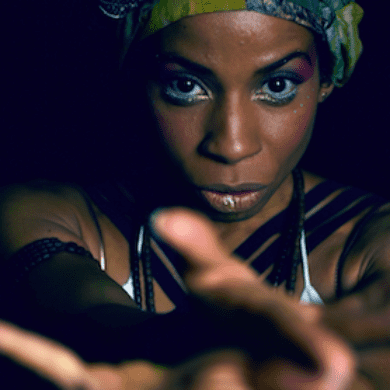 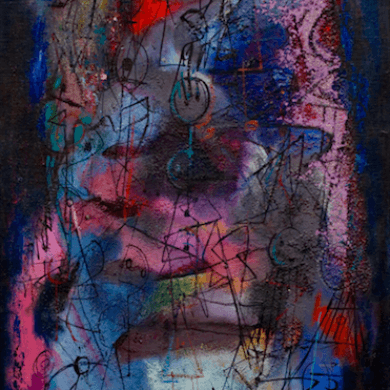 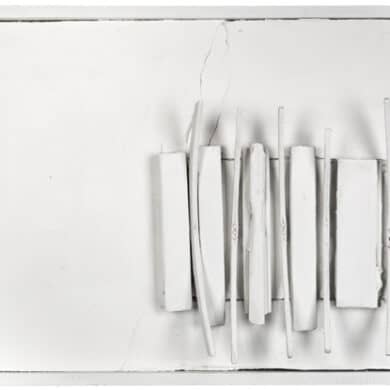 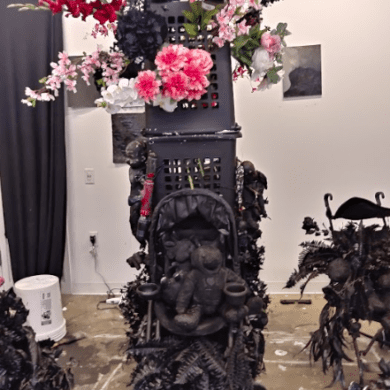 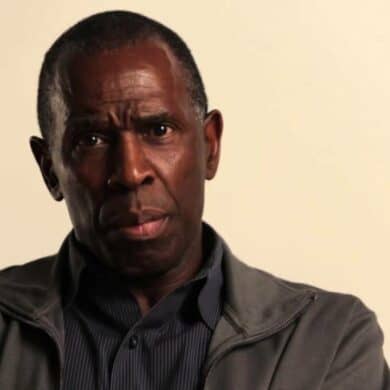 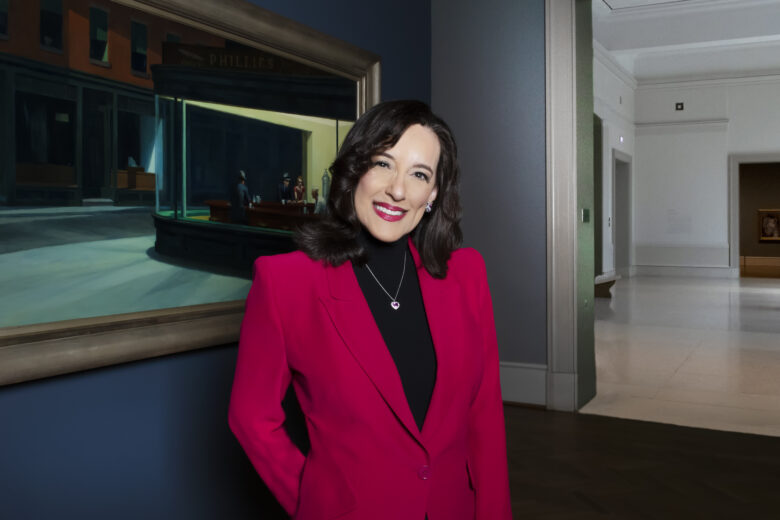 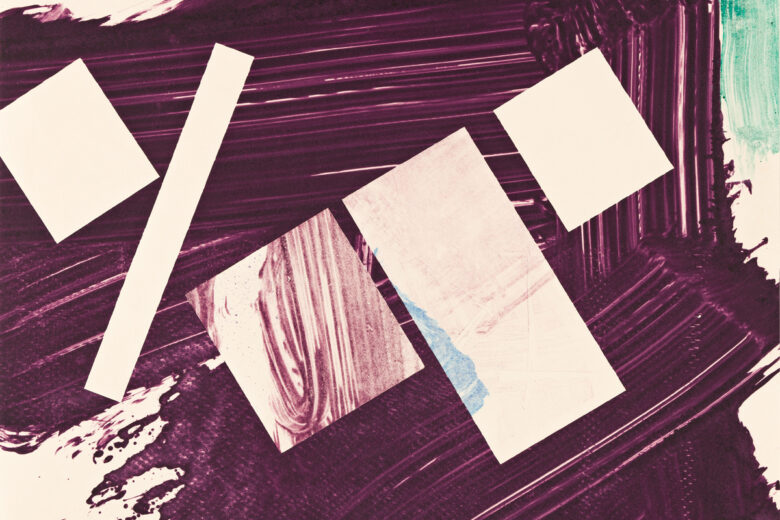