This week in African art and culture, we’re starting off Black History Month with many events to announce. Kanaval is a go in Ayati (Creole for Haiti), despite rising political problems. Emmett Till’s house becomes a historical site. Coveted fellowships and residences are being awarded to POC. Haitian President Jovenel Moïse declared in December that from Feb. 14-16, the national Carnival, or Kanaval, as it is named in Haitian Creole, will take place in Port-de-Paix, in the northwest region of the country. His announcement was met with backlash, as his devotion to Kanaval was expressed before he addressed the surge of kidnappings occurring in the country, with an estimated 160 per month just in the past year. Moïse asked for the nation to come together at the end of January to combat this issue, but the damage was done.

Citizens are afraid to cooperate with police due to propaganda and reports of kidnappers wearing police uniforms. None of this concern was addressed by Moïse. Neither he nor the police have given information on the exact number of kidnappings that have occurred.

Meanwhile, after almost a year of encouraging visitors and tourists to enter the country without taking a COVID-19 exam, the Ministry of Health of Haiti declared Tuesday that all passengers would be required to demonstrate a negative COVID-19 test taken no more than 72 hours prior to boarding. The requirement goes into effect as of Feb. 9, just days before the country’s festival.

The United States Artists (USA), based in Chicago, named 60 recipients of its 2021 fellowships, representing the highest fellowship class in its 15-year history. A $50,000 cash award will be given to each of the chosen artists working in 10 artistic disciplines: architecture & design, craft, dance, video, television, music, theater & performance, traditional arts, visual art, and poetry. Among the fellows named is Bisa Butler, under the craft category. (Her work was featured on the cover of our Black and Basel 2019 issue.) Awardees may use the cash prize unconditionally, for any reason that supports them as an artist. As a founding member of Artist Relief, in 2020, the USA helped to allocate $20 million in additional aid to artists displaced by the COVID-19 crisis. Here are this year’s fellows:

On Feb. 2, the recipients of a residency that brings artists from around the world together for 1-3 months in Dakar, Senegal were announced by Black Rock. This multidisciplinary artist-in-residence initiative, established by renowned artist Kehinde Wiley in 2019, is named for the volcanic rocks that blanket the country’s shoreline. Senegalese architect Abib Djenne invented the Black Rock compound concept with an interior design partnership of Wiley, Fatiya Djenne, and Aissa Dione. In addition to three single-occupancy residence apartments with adjacent studio rooms, the building contains a residence and studio room for Wiley.

Black Rock’s mission statement is to “support new artistic creation through collaborative exchange and to incite change in the global discourse about Africa.” The organization provides residents with a local team to help them get acquainted with the city of Dakar, a language teacher to help with the program’s three main languages, English, French and Wolof, and a small stipend for incidentals and extra art materials. Here are this year’s artists-in-residence:

History Being Made from Continent to Continent Above: Marcellina Akpojotor, Deep Within Me

Rele Gallery in Nigeria opened the doors to its new space on Melrose Avenue in Los Angeles on Feb. 1. Orita Meta-Crossroads, showcasing work by three contemporary Nigerian female artists: Marcellina Akpojotor, Tonia Nneji and Chidinma Nnoli, will debut at the gallery, which has two locations in Lagos. The title is derived from a book and painting by Peju Alatise, a fellow Nigerian artist, and roughly from a Yoruba term meaning “a junction where three roads meet.” The show explores the conversation on the topics of gender and femininity among three thrilling female artists working today in Nigeria.

Rele Gallery is the first gallery established on the continent of Africa to open in Los Angeles. The new gallery will see a hefty number of patrons in the coming months. Prior to its L.A. spinoff, a large share of the gallery’s patrons came from the U.S.

Emmett Till House Honored as Landmark

In August 1955, in a racial assault that stunned the country and provided a spark for the nascent civil rights movement, Emmett Till, a 14-year-old African American boy, was brutally murdered. Almost 70 years later, he is getting more and more of the respect he deserves. On Jan. 27, the city council of Chicago declared that it had given official landmark status to Till’s home, a 125-year-old building that had fallen into disrepair, after having granted provisional approval in September.

A Chicago native, Till was in Money, Mississippi visiting relatives when he was accused of harassing a local white woman. Till’s mother, Mamie Till-Mobley, held an open-casket funeral for him at a nearby church and gave Black press members permission to photograph his tortured body, igniting what became a generation of civil rights activists.

The Tills’ 2,400 square foot house, located in Chicago’s Woodlawn neighborhood, was built in 1895. Until 1962, while struggling to campaign for her son and other Black children, Mamie Till-Mobley decided to live in a three-bedroom flat on the second floor of the house. The landmark classification preserves the building and prevents any substantial renovations that might change its façade. A local nonprofit bought the home last year: Blacks in Green declared at that time that it intended to convert it into a heritage site.
-Sumaiyah E. Wade

Arte: The Endangered Species: A Visual Response to the Vanishing Black Man. 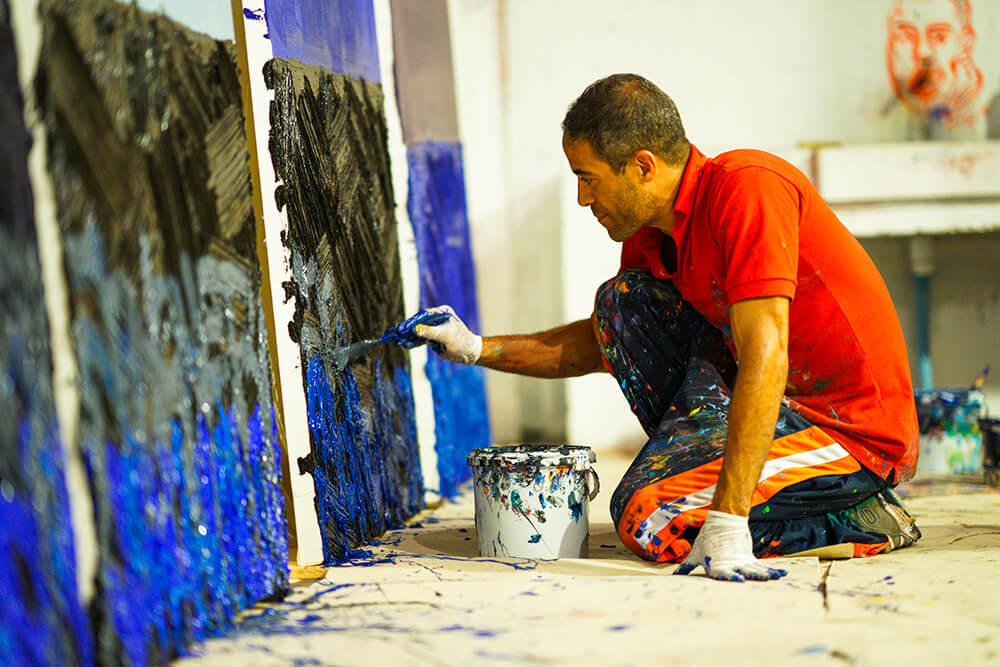 The Montresso Foundation presents JonOne: A Dream Longer Than Night