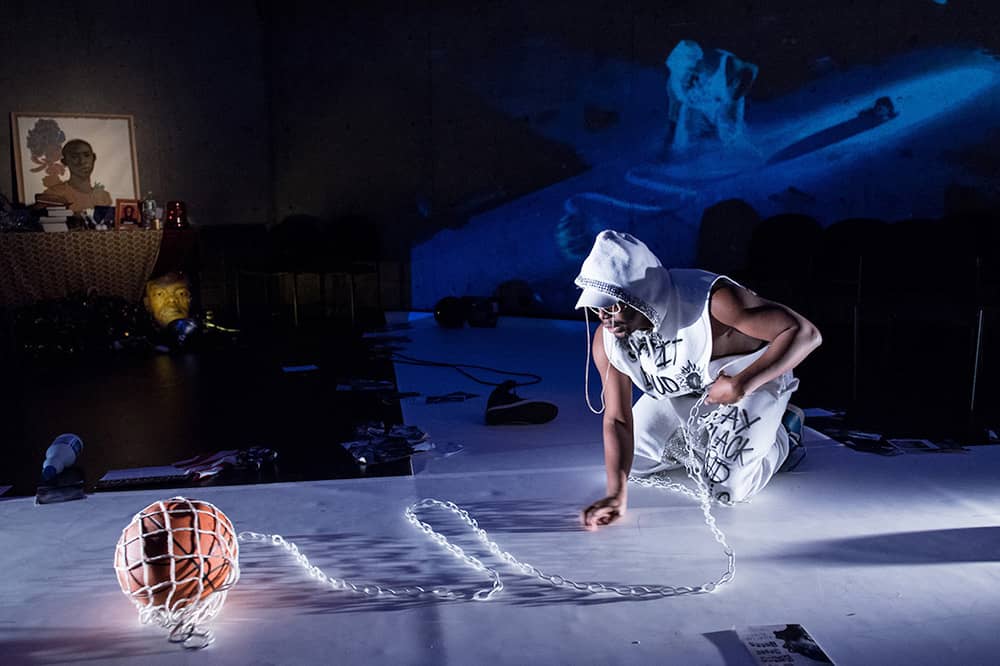 These places of possibility within ourselves are dark because they are ancient and hidden; they have survived and grown strong through that darkness. Within these deep places, each one of us holds an incredible reserve of creativity and power, of unexamined and unrecorded emotion and feeling.1

My closed lids keep me hidden in indeterminable darkness. There are others with me, here in this darkness, though my sight could not attest to that, and I am here with them; here, with and for each other. They announce themselves in breaths; some stuttered, heavy and subdued, while others declare themselves in wails, yelps, mutterings and tapping fingers. Each cry punctuates our shared darkness, a rhythm of voices disembodied by the night of our setting eyes. The stable voice of Jaamil Olawale Kosoko encircles and encourages us, pulling us from and towards this darkness, sinking us deeper in pursuit of bursts of potential buried beneath the skin. Finally recovering us from that lightless place, Kosoko welcomes us to open our eyes, and by his instruction, we are returned to the white-lit project space of ArtEZ, an arts institute in Arnhem, The Netherlands, where his workshop, Unfolding the Transgressive Body, takes place. There are not many of us, though we each have carried a passage of history in the cargo of our bodies; a convergence of histories and personalities, with origins spanning across Africa, The Americas, Asia and Europe. What little or lot we may bring as a particular set of individuals, Kosoko invites us to bring it, facilitating a space of democratised worth, where each of us participating is expected to contribute to the group, only to the extent of which we are capable.

Kosoko’s workshop employs an atmosphere of interdependency, generosity and a group- minded self-care, applied to practices of meditation and psychic choreography in the formation and emergence of radical alternatives to normalised performance. The sort of generosity at play concerns the readiness of the individual to merge with the group in heterogeneous unity. That is, not for the individual to disappear in assimilation but, instead, to accommodate “the coming together of elements which are, to begin with, varied and diverse in their particular natures.”2 In this self-giving (as opposed to self-loss), each participant still bears the opportunity to highlight their contributions and talents in the propulsion of the group.3

The difference must be not merely tolerated, but seen as a fund of necessary polarities between which our creativity can spark like a dialectic. Only then does the necessity for interdependency become unthreatening. Only within that interdependency of different strengths, acknowledged and equal, can the power to seek new ways of being in the world generate, as well as the courage and sustenance to act where there are no charters.4

Putting this into practice, Kosoko demonstrates another stage in his workshop, a game he calls “All of Me,” a practice in gifting. Pacing slowly at first, contemplating an invisible “this,” Kosoko begins frantically sweeping up some feathers, silver wigs, gloves and a disheveled bolt of cloth. Struggling to propose his intentions and his voice trembling, almost failing – “I just want to… I’m just trying to… I just want to show you – to give you…” – as frantically as his movements, Kosoko finally gets a grip of his props and his voice. Attempting to capture the perfect gesture of presenting his offering, his climax pointed by a declared, “THIS,” Kosoko gifts the load to another participant, who is then invited to return the gift to him. What is being gifted and returned has little to do with the physical props but, instead, the very energy, life-force, peculiarity, and character (as visualised and emphasised through the props) invoked and imbued in the act of giving all of oneself to another.

Divided into groups of three, we each take turns gifting all of ourselves to each other. My group and I were not acquainted with each other before attending this workshop, though an effort of thought and consideration was put into the gifts given by my group members. In their exchange and contribution, shades of personality, character, and complexities rubbed off in the act of gifting. Each energy and thought was particular through the spontaneous gestures of their generosity. Some of the gifts of the room included building chair structures, the rhythmic tapping of pens and the forfeiting of sentimental jewelry. In each gift’s return, both individual and collaborative expressions were conjured, allowing the two receivers a conflicted convergence of creative impulses, such as the tying together and a dual procession of receivers in one instance. In this exchange, trust, thoughtfulness, and respect take precedence between participants (otherwise unfamiliar to each other) in a fateful momentary unity. The patient learning of one another, getting used to one another, rubbing up against one another in creative tension, the process of becoming familiar through performance, knowledge, and skill-sharing – all of these practices take precedence in Kosoko’s workshop. And in the unexpected newfound closeness between strangers, tempered by such methods of generosity and interdependency, there exists “the love that binds people to the collective […] the love – or force or needs – that leads individuals to seek an ecstatic merger with the group.”5

I have a particular feeling, knowledge, and understanding for those sisters with whom I have danced hard with, played with, or even fought. This broad participation has often been the forerunner for joint concerted actions not possible before.6 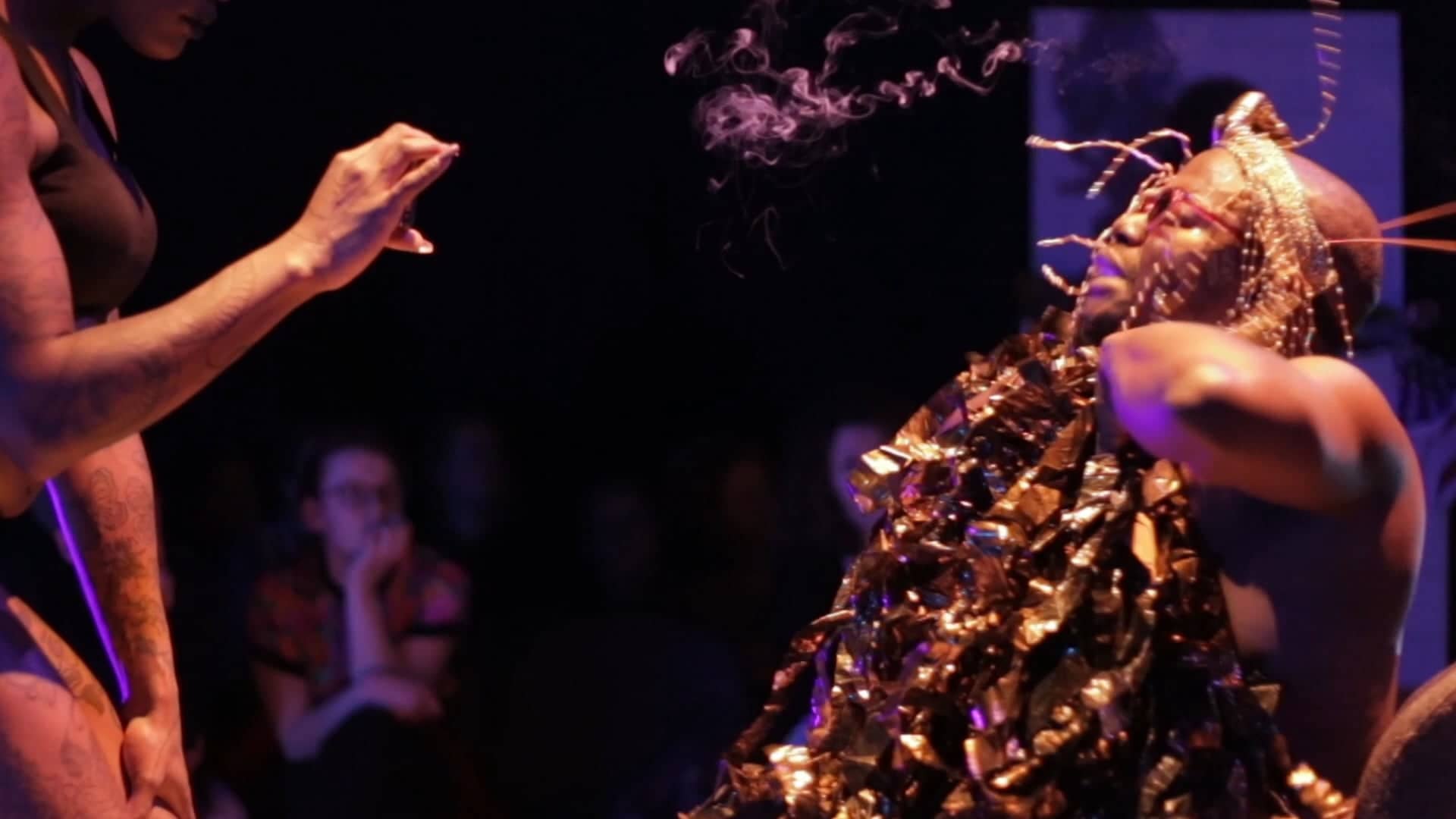 Before this workshop, Kosoko delivered an artist talk, “White State | Black Mind,” mainly discussing a film of the same name, co-created by Marica De Michele, which documents critical reflections of Kosoko and his collaborators in the making of his multimedia performance, #Negrophobia. #Negrophobia, itself, may arguably be considered a total work of art, in that the layers of material and media composing its production are so varied, expansive and borderline chaotic. Incorporating dance, sound, music, poetry, masquerade, costuming, performance, critical readings, live recording and video,  grounded in a ritual site (cluttered with relevant texts and altar pieces) ; the work serves as, in Kosoko’s words, “a public mourning of those victims slain by state-sanctioned violence.”7 A notable presence within the work is Kosoko’s collaborator, IMMA, a black trans-woman, not only because she dons a horse mask and riding crop but also, in how her presence affects the discursive potential of Kosoko’s performative platform, as facilitated through #Negrophobia. In the lecture, Kosoko discloses that IMMA’s gradual performance within the work eventually coincided with her coming-out, noting the expansion of the work’s function to accommodate a space “where she [may locate] her power.”8 Over the approximate two years of #Negrophobia’s emergence and growth, IMMA notes that, “The work has […] been forced to navigate itself around those issues,” in relation to her transition coinciding with the work’s development.9 Transforming the conceptual framework of #Negrophobia through her own body politic, carried and contributed to the work, IMMA’s presence provokes a more intersectional critical engagement of a multifaceted blackness, informed by her black trans-womanhood. 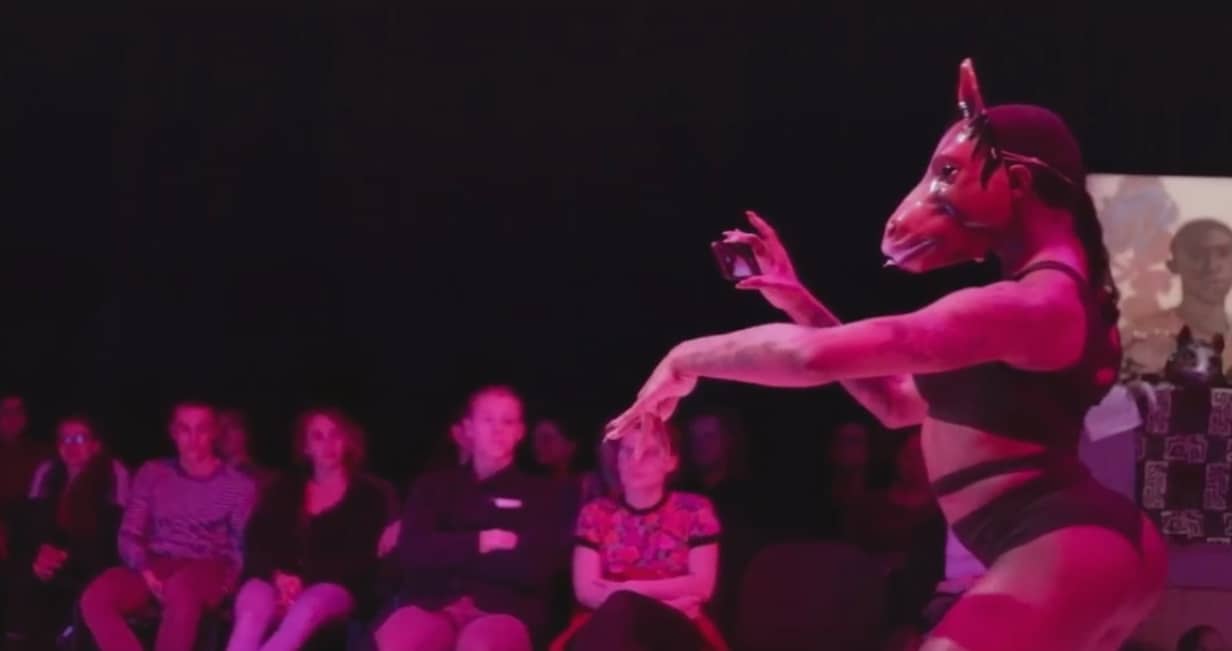 The significance of IMMA’s participation, then, in Kosoko’s #Negrophobia is her ability and agency to move in his way. Borrowing this phrase from Sonia Boyce’s improvisational participatory work, We Move in Her Way (2017), whose title suggests “that ‘she’ dictates our movements; or that we obstruct ‘hers,’ with both interpretations suggesting power is at play,”10. IMMA’s role in #Negrophobia evolves to accommodate both instructed and obstructive performative actions, unsettling the power dynamics at play between herself and Kosoko and making space for a sharing of power. Although the work directs itself towards tones of grief, a room of consolation and collective joy is carved out in this space held between Kosoko and IMMA.  The power of each other’s feelings is shared rather than abused, where “the sharing of joy […] forms a bridge between the sharers which can be the basis for understanding much of what is not shared between them.”11 Each moves in the other’s way as a means to come together, in a shared gesture of communion and love.

Without community, there is no liberation, only the most vulnerable and temporary armistice between an individual and her oppression. But community must not mean a shedding of our differences, nor the pathetic pretense that these differences do not exist.12 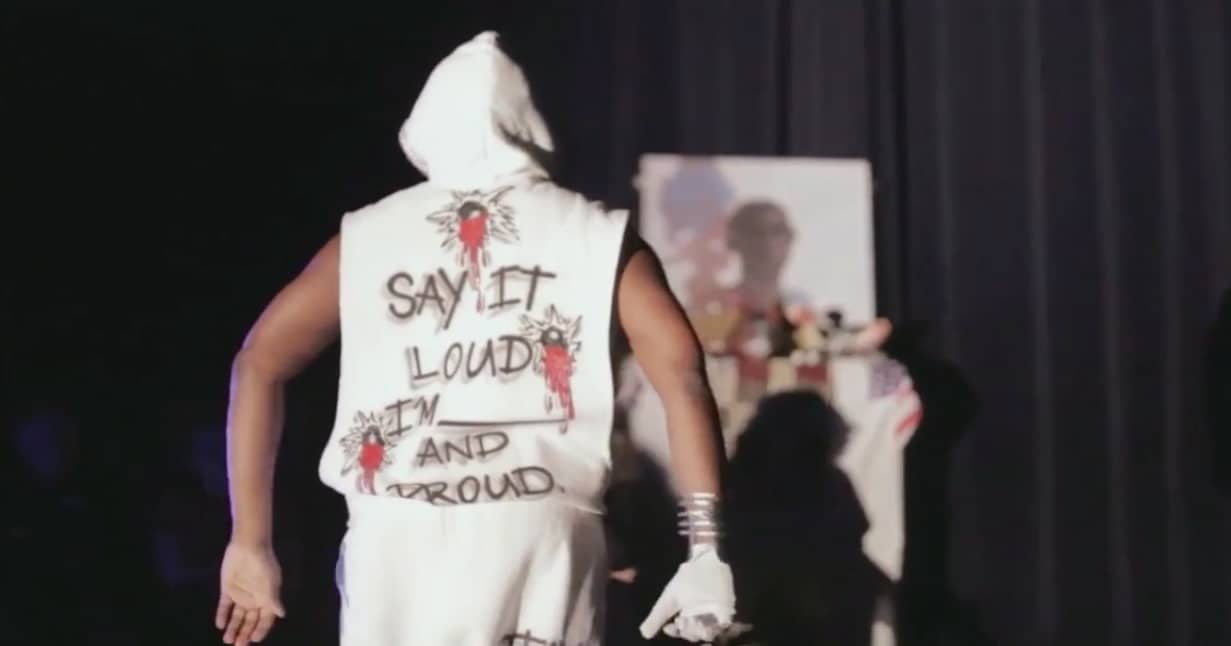 Returning to the lecture and workshop, one particular sentiment of Kosoko stood out. On asking him whether he felt fear or concern for his work and thoughts becoming palatable or consumable, taken for granted, tokenised or being ‘eaten by the other’ (in the tradition of bell hooks), when presenting in predominately white spaces, Kosoko recognised an importance in reaching communities outside of his own, while at the same time prioritising the welfare and care of his community. “Take care of your own community,” implored Kosoko, as a primary responsibility tasked to each of us, across lines of difference. He reiterated this sentiment when, in his workshop, a white Dutch participant asked what they could do in alliance against a racist society. Let us clarify that the notion of “taking care of one’s community” is not a blanket statement. “Taking care,” may be read as the tasking of a set of responsibilities particular to each individual, determined by the community from which they arrive, the problems unique to their community and the underlying goal at the heart of such ‘care’. If we ever share the hope for a decolonised future across our communities, then we must take care to address the interlaced social disparities that empower and disarm each of us accordingly. What resonates between Kosoko’s workshop, Unfolding the Transgressive Body, and his work, #Negrophobia, is the capacity for participants to move in each other’s way. Through making space for one another to be heard, seen and felt, making space to be moved by one another, making space and sharing power where space and power have been kept in short supply, perhaps we can return to that darkness of possibility, together. 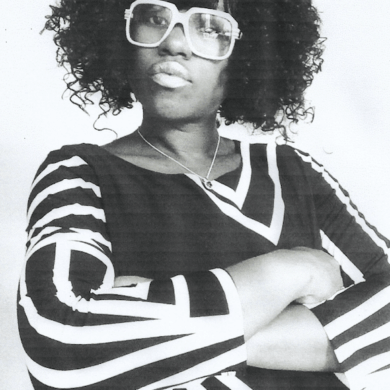 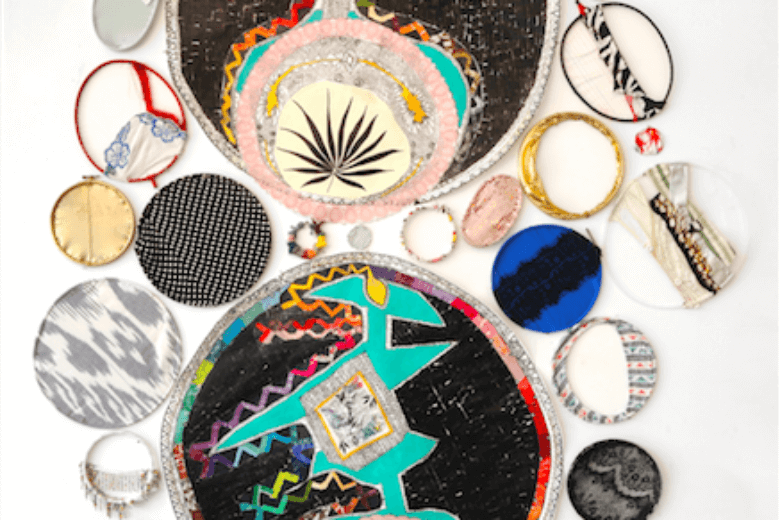 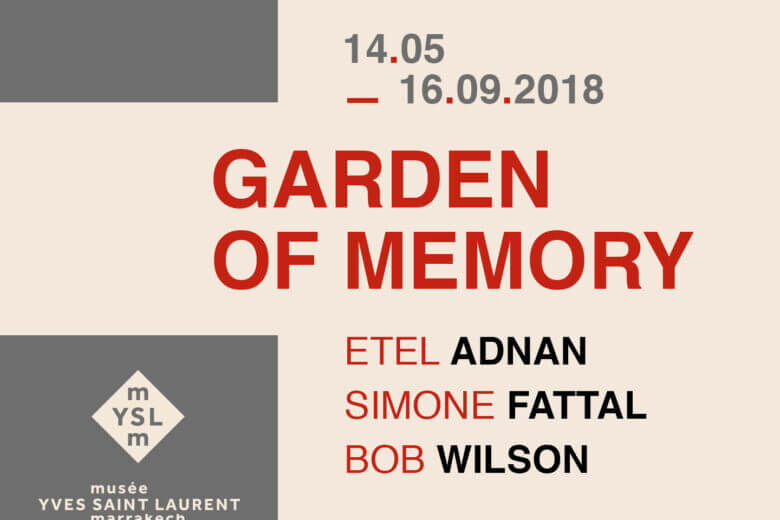