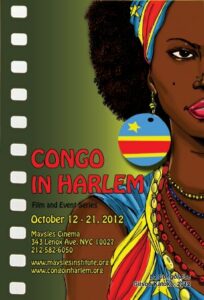 Congo in Harlem 4 is the fourth annual series of Congo-related films and events at the Maysles Cinema in Harlem. Congo in Harlem showcases innovative work that celebrates Congolese culture, raises awareness about DR Congo’s challenges, provokes dialogue, and encourages community engagement. It takes place in New York as a part of Congo Week every year.

Highlights of Congo in Harlem 4 include a retrospective of the work of pioneering Congolese animator Jean Michel Kibushi; the much buzzed-about Episode III: Enjoy Poverty, followed by a post-screening discussion with filmmaker Renzo Martens; Cuba: An African Odyssey, with director Jihan El-Tahri in attendance; the first US screening of Atalaku, a hard-hitting exposé of the 2011 elections by Kinshasa native Dieudo Hamadi; White Elephant, Kristof Bilson’s elegant study of the crumbling central post office in Kinshasa; a pair of deeply personal journeys into the past, Return to Mandima and In the Footsteps of My Other; Justice for Sale, a bold exploration of corruption and impunity; and Boma Turvuren: The Voyage, which chronicles the tragic saga of 267 Congolese brought to Brussels as exhibits for the 1897 World’s Fair. Most screenings will be followed by panel discussions, special events, musical performances, and receptions, and many of the directors will be in attendance. More films will be added to the program, and the full schedule of events will be announced in early September.

In addition to the films, Congo in Harlem 4 will feature a special, in-depth panel discussion exploring the lessons and implications of the KONY 2012 campaign for DR Congo. More details will be announced on our website soon

Congo in Harlem 4 is a non-profit series produced by Maysles Cinema, True-Walker Productions and Friends of the Congo. It is made possible by the generous support of DISH Africa TV, The Cultures of Resistance Network, V-Day, and Panzi Foundation USA.

***Proceeds raised from Congo in Harlem will be contributed to a fund to support emerging Congolese filmmakers.***

Maysles Cinema is located at 343 Lenox Avenue/Malcolm X Blvd at 127th St.
Screenings are open to the public at a suggested donation of $10.
Box office opens 1 hour prior to show time.
For tickets and full program, visit: www.mayslesinstitute.org
Contact: cinema@mayslesinstitute.org or call (212) 582-6050