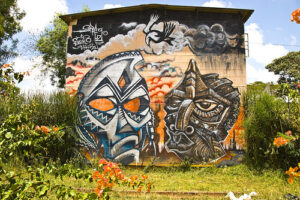 Spray Uzi, kings of Kenya’s nascent graffiti scene, are on a mission to show the world that there is more to Africa than child soldiers, emaciated babies and unaccountable despots.

These four artists have been invited to travel to Djibouti, to help with the renovation of a youth community centre. The trip will take them through Ethiopia, where they will join forces with local artists and youth organizations for a series of public art shows and installations.

Katy Fentress, a freelance journalist residing in Kenya, has decided to video-document the trip. She sees this as an innovative way to attempt to readjust some of the negative PR that Africa and Africans are subjected to.

The film will aim to be a playful way of conveying an important message that is often willfully ignored by the media and the global aid industry. This is a unique opportunity to show people across the world that we have spent too much time looking at Africans as if they are helpless victims.

Spraycan Safari aims to subvert the current understanding of Africa and Africans, by presenting us with a group of talented, savvy, modern youth, who do graffiti to brighten people’s surroundings and address some of the problems that we all face in society today.

By using graffiti/African street art as the backdrop around which the documentary will be framed, the aim is to speak to the younger generations. The ones that have been brought up on a diet of Mtv and jackass style television and who are enthusiastic about the idea of spray can art.

Spraycan Safari does not aim to revolutionize the world nor resolve the real and difficult hardship that is experienced by thousands of people in “developing” countries everyday. However Spray Uzi, the central characters of the documentary, are exactly the kind of role models that inspire their peers and give them scope to think that another future is possible.

Here is a taste of what to expect: