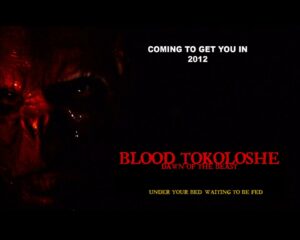 Horror films are a huge DVD money maker and a good way to get your film and name in the market. Horror film franchises like Saw and Paranormal Activity have millions worldwide and are influencing filmmakers all over the world to franchise in the same manner. The South African Film Blood Tokoloshe hopes to be the next big film franchise of 2012. The film is about Strange attacks that plague the Orange Farm township’s women, leaving the town leaders at a loss to defend them. But with every attack Mthunzi, a sly business man, is becoming wealthier and growing in sexual icon status . The local Reverend learns that Mthunzi has enslaved a Tokoloshe using it to fulfill his greedy desires. Through his greed he breaks a golden rule and loses control of the beast, which goes on a murderous rampage to exact its revenge. Thirst for blood, the beast comes after Mthunzi’s ex-lovers, saving Mthunzi and his current lover, Boitumelo for last. With nowhere left to run Mthunzi turns to the Reverend. Will he be able to stop overcome the beast to save himself, and the one he loves? If this sounds interesting to you, then this maybe a a film that you can help finance. The franchise is currently looking to raise the remaining $5,000. to complete the film. Investments in the project also fund the their program to help locals learn film making and production skills so that the actual Orange Farm community can create a local industry. To give to the project visit here
Here is the trailer: