One of the most intriguing aspects of the digital aesthetic is that it continues to renovate older, more familiar forms of memory into nearly unrecognizable trends of design. Every Instagram page imitates an individual scrapbook, a collage of photos, objects and experiences by which one wants to be remembered. Each user is a curator of their own brand, and ultimately the version of the life they want to convey to their curated audience. A rarer find, however, is the analog practice that imitates digital aesthetics accurately and with taste. Of course, the internet remains “virtual” because it is a simulation of our everyday lives, made accessible by the device in our pockets. The virtual is perfectly unattainable and often deceivingly performs the realistic aesthetic better than its real-life forms.

Art attempts to bend these two realities to suture the future with the past. In turn, it alters the present. Radical art-making practices offer the creative as a challenge to and an invention of the zeitgeist in real time. Contemporary Black American artist Qualeasha Wood (b. 1996, Long Branch, NJ) uses textiles to set trends (she collaborated with Louis Vuitton in 2021) while continuing the African diasporic tradition of a visual and tactile mode of storytelling to create this present. The artist uses the tapestry and its alternate form, the quilt, as a medium for how the digital and textiles intersect over and beyond Blackness. Wood also explains her work as a practice that “spans sculptural, textile, and digital media” and “suggests realities around living in the Black female body that do and might exist.” Her specific textile practice began during the pandemic, when she began tufting in light of the rugs found in her parent’s attic. This practice is a Black feminist one: a practice that imagines a radical future that does not exist yet, while authorizing a present that makes that radical future possible.

While Wood is known for “bringing ‘textiles’ into the 21st century,” such analyses of her work reject the ways that Wood is part of a cadre of multi-media Black artists who transcend rigid definitions of mode and content to fuse African Americana practices such as quilting and tapestry.

Wood’s work traverses beyond early African American women artists like Faith Ringgold. Like the 20th century and contemporary artist, Wood uses the blanket within the tradition of quilting to piece together the iconography of emojis, interweaving the digital and the analog. Such integration of digital aesthetics is rarely tastefully achieved in fine art.

Often constructed under austere conditions of poverty, the quilt was often made up of scraps from clothes, towels or other utilitarian fabrics that were re-purposed to keep one warm. Today, the interplay between the tactile and the digital for mutual unrest of time and space gives way to seeing how Black women’s textiles work as a time-bending practice.

Black women’s textile practices encompass both their own story of creation and the story of use: Black women took up quilting as a pastime and then elevated it into fine art. These early quilts are held and hung as a family heirloom. The African American tradition of quilting recalls a different history, one of storytelling, generational pain, and use. While they both still occupy textile practice, woven practices offer a ritualistic practice of replicating the digital. Much like the ritualistic practice of coding where one “plugs in” to type a series of 0s and 1s, the painstaking ritual of creating a textile is a performance all its own.

Wood’s tapestry convenes with the fabric to be woven together: a practice, a performance only to be seen and experienced by the artist herself in an encoded language.  Wood contributes to the fabrications of what I call “digi-texiles,” or a material creation that can be touched, seen or possibly used in the tactile space while evoking references of the digital world. As digi-textiles only can be known by the one to whom the device belongs, Wood interweaves a personal and a collective history of a relationship with the digital and the medium of tapestry. One such example is Wood’s Following (2018), which interlays Biblical references, staying with Wood’s commitment to Black women as not only the primary subject of her pieces but as “God.” Displaying her primary subjects in the center of the tapestry, our ebony God wears a red robe and red sneakers. The ebony “God” is a feminine but androgynous one who does not wear a bonnet, but a durag. The young woman outstretches both hands, holding both ends of the durag. Surrounded in each of the four corners are four mirrored images of a Black woman, peering up and out to the audience. The eye is drawn to the God-like figure in the center and by the digital pointer of nostalgic computer life.

The white finger points while the others curl as if to direct and hover in anticipation of what one “click” on the “God” might bring. The cursor evokes the “young hot ebony,” that is written in italics above the “God:” “God is a young hot ebony” and then below the “God:” “and she’s on the internet.” Such words remind its audience of the white gaze of the internet which ranks “ebony” as one of the top three most searched porn categories around the world. A pinnacle of desire across gender, countries, ethnicities and sex, the ebony “God” is not only exploited for recreational desire but simultaneously for that which we revere, is unattainable and is all-knowing. Common God-like iconography is at play in Woods’ pieces as the block-style look of a pixelated photo that is interrupted by marble-colored blocks, not unlike looking up at the Sistine Chapel, and the disciples looking up and over to the centered God among a stone ceiling.

The divinity of the “young hot ebony” also asks the audience: Do we “follow” such a “God?” “Following” is a charged term in social media; to be a “follower” of a brand or person has the power to describe your taste, your identity. What’s more, to have “followers” gives you power and status in social media algorithmic structures, which place those with more followers on top of feeds and explore pages. “Following” convinces its audience that such a “God” is all-virtual, all-digital and unrecognizable in the non-virtual life: Black women are more likely to be harassed, kidnapped, murdered, than any other demographic in the United States. Respect for such a “God” is only virtually possible.

Wood’s work breaks open a genre of the digi-textile to dissolve the boundaries between the “real” and the “virtual.” The Internet, a seedy and liberatory space of its own, takes the Black woman “God” out from behind the secret screen and onto the canvas of the textile. The artist’s tapestries ask the internet to ruminate on its own limitations in containing Black American art traditions and futures alike, and on what realms of existence—the digital, the textile or both—can be a container for such an ebony “God” to be loved, felt, seen on her own terms. 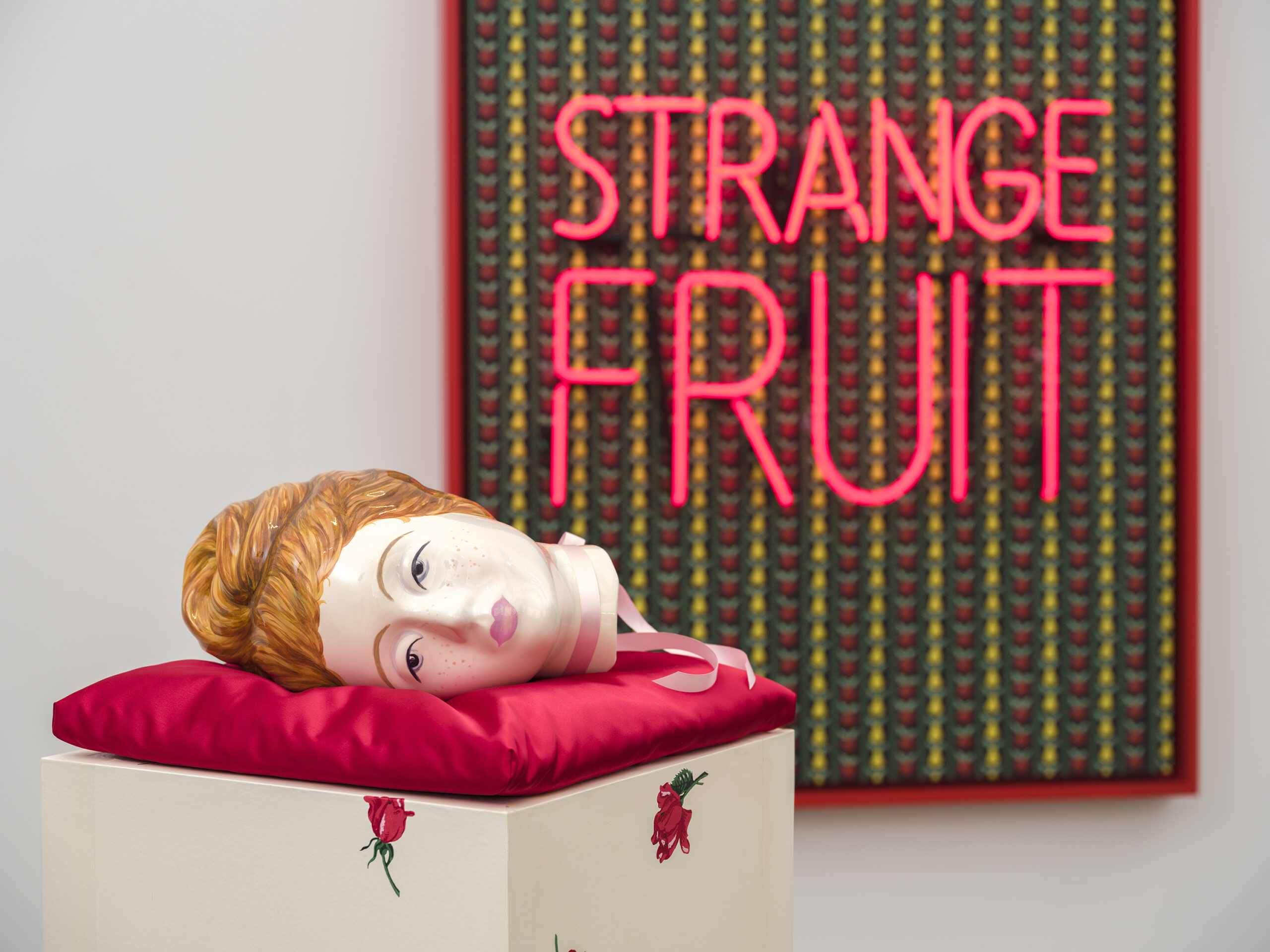