Los Angeles-based artist Brandon Deener takes an Afro-futuristic approach to his painting. Best known for his portraiture, Deener tethers between two different styles. One being the long-necked figures and the other being a compilation of Black noses. In his portraiture, he loosely paints a head on the upper edge of the canvas with the neck of the subject stretching down to the bottom of the canvas. Deener says that this work came out of experimentation, and that the long necks represent rising up through turmoil and individually stepping into a more confident person. He also expresses that the long neck represents manifestation, having the ability to have an idea come into fruition from start to finish.

In Deneer’s nose paintings, he explores the beauty in Black features in a simplified manner, isolating this specific feature and multiplying it across the canvas. Deener paints overlapping noses in a variety of colors referencing this body of work to dots by Damien Hirst.

In a recent Zoom interview, Deener recalls a past conversation with a friend discussing the appropriation and fetishization of Black features by non-Black people. Saying that non-Black individuals typically get spray tans, lip or butt enhancement to replicate Black features, but they’re not seeking out surgery to emulate the Black nose. He states that this conversation is what inspired him to create a painting solely on Black noses. He reveals that he used to get teased for his nose growing up, but “this is just how we look.” Deener uses different colors to emphasize and appreciate Black facial features, reiterating in his work that “no matter the color of the nose, you can still tell that that nose belongs to a Black person.” And that’s beautiful. The Afro-futuristic aspect of his work is seeing Black people thriving and united in the future . Above: Brandon Deener.Photo by Indi Moret

Kendra Walker: So tell me about your journey. How did you get involved in the arts?

Brandon Deener: So I did music in high school, I’m in a band and my last year of high school I just called it quits [the band] and started making beats. I started taking it more seriously, after high school. It was just music, always music, but I could always draw.

So I’m coming from being an aspiring producer. I’m a really good producer. I was one of Timbaland’s producers. I used to work with Missy Elliott and got in a studio with Jay Z and Beyoncé, not just name dropping but using them as a metric, because they’re like the top, you know what I’m saying? If you can get in a studio with them, it’s like, you made it, but I just feel like I reached that height and all of a sudden, I find myself doing Postmates in Miami. And it’s like, what the hell just happened. Above: Work by Brandon Deener.

I just never gave up. And then that brought back the Timbalands, the Coach Ks and all of these, you know, music people who are into collecting Black art—it put them back in my stratosphere. When I was in the studio with Jay Z and Beyoncé in 2012, I had no idea that I would be painting at all.

BD: People know me in the music industry. That’s hence, why the Coach K studio visit was like a full-circle moment. Because Timbaland owns maybe like four or five works. I think of mine. So it’s just crazy how life works and circles back. And that’s when it became more clear that art is going to get me places that my music didn’t.

You know, once again, I never had a blueprint, just learning on the fly. And I just think that my story started to feel like I was being guided by God, because how do you go from that great hype of being in the music industry to just about to have all of the success or what I thought I was to just go back down to building myself back up. That process—there’s inspiration that can be gained from that story. Although I still do music, I just really went hard with my art. And it’s working, and then it’s bringing back people from the music industry. Another important part of my story, 2014 was a crazy year for me. ‘Cause in the summer I had four deaths in two months, so I lost my dad and then I lost my grandmother, she was like my friend, we talked all the time. So that was a big loss. And I’ve never experienced a close death like that before. So I didn’t know how to grieve. And a week after my grandmother passed, my cousin and my great aunt passed. So it was crazy. I was in Memphis for like three months, and I had started painting maybe six months prior, but when I was there, it was just therapy for me. And I didn’t know how to grieve. So painting for me is really like a spiritual practice in a sense. Above: Brandon Deener, “That Black Nose #6″.

KW: Sorry to hear that about your losses.

BD: Thank you. Thank you. I appreciate that they’re ancestors now. But it’s cool. Something very beautiful came from that. It’s just that part of my story is like, I have to mention that part, it’s key to changing my mentality about certain things, my mindset and being more spiritual.

KW: Let’s talk about the conceptual meaning behind the paintings with long necks.

DB: To go back, the context behind the long necks, working with a name like Timbaland, it’s like, how do you create your own lane as a producer? I can’t just be working under somebody all the time. So, I learned so much from being in that position, which was a privileged position, and I never took that for granted, but I wasn’t as confident then. Like I am now. There’s a few meanings. Above: Brandon Deener, “It Was Tough but I Made it Through”.

And the context for it came later, because I did that first painting at the end of 2019, and then 2020 happened where everybody was inside, and I was just learning and reading a bunch of different things and studying Black history and what’s happening to Black people in America, and just coming across information. And I just feel like, as a people too, like we were just rising up and realizing who we are, where we are, and where we come from. The civil unrest stuff was happening. And I was like, yielding to that, and it started to really come out of my work then. Above: Bramdon Deener,“Either You Gon Stay In or Out! You Lettin Flies In The House!!!”

The long necks started to represent us as a people rising up. Rising up spiritually, rising up intellectually, rising up in our confidence. Being in the music industry, in order to come from those shadows of the people who I used to work with, and to not just be considered as such and such’s producer, but me as my own brand, I had to rise up into my own confidence and really just take control of my career and blossom into who I’m going to be. And I didn’t even know who that was yet, but I just had to take the necessary steps and work on myself to get to that point. Especially being from where I’m from, Memphis, Tennessee, I needed to really walk into that power I kind of hid myself from. 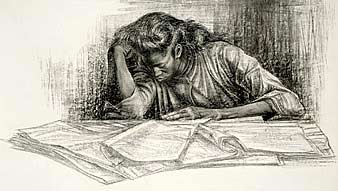 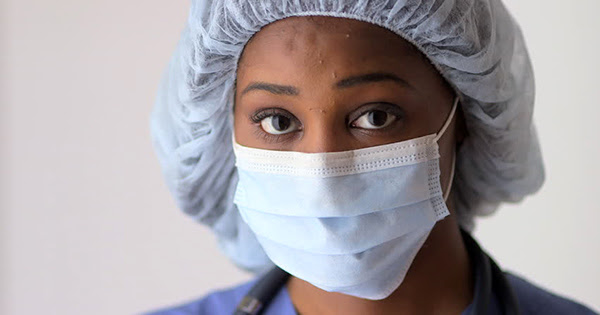