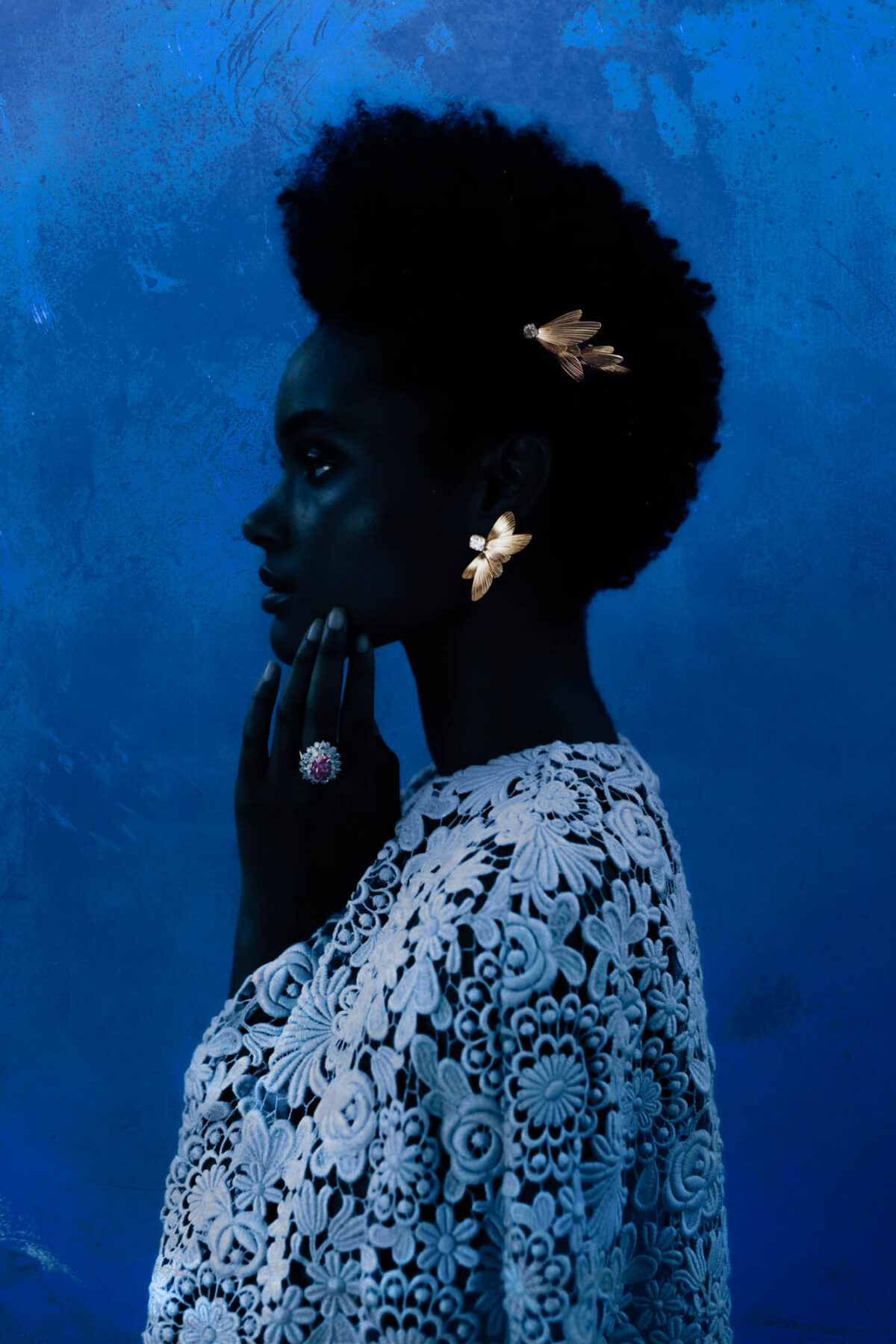 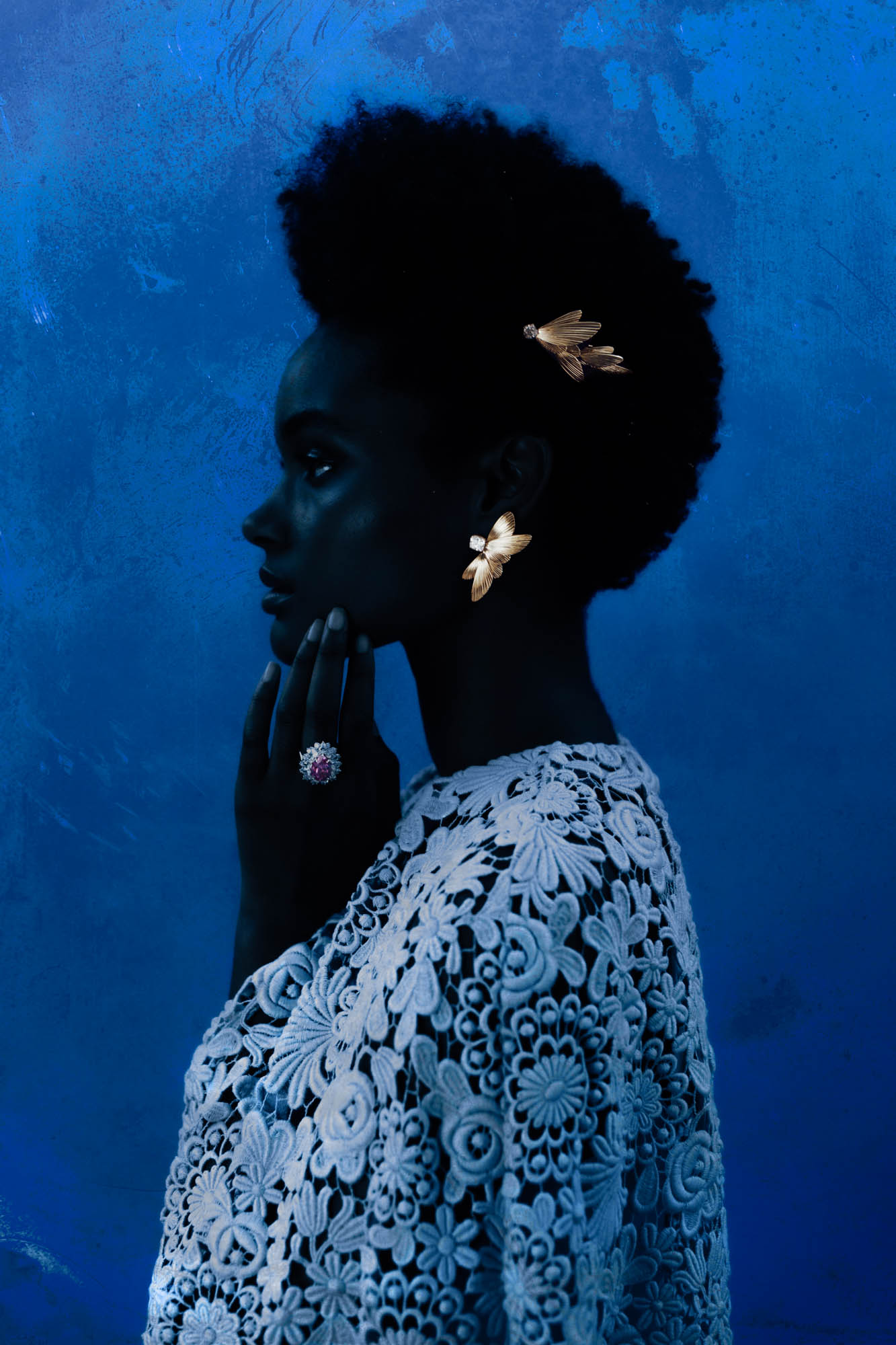 Kendra Walker, an art writer and advisor based out of Atlanta, sits down with Shawn Theodore to discuss his solo exhibition of photographic work titled Night Stars, that was on view at Paradigm Gallery, Philadelphia until April 11, 2021.

Shawn Theodore is an award-winning photographer. His commercial projects include works for Apple, Showtime Networks, RocNation, PAPER Magazine, New York Magazine, Smithsonian Magazine, The New York Times and more. His work has been collected among Michelle Obama, Colin Kaepernick, Danny Simmons and has found its way into institutions such as The African American Museum of Philadelphia, Library of the Guggenheim Museum, Library of the Getty Institute and Syracuse University.

Theodore captured photographs of Youth Poet Laureate Amanda Gorman in 2018 that recently gained intensive attention after her inaugural poem, The Hill We Climb, in January 2021. He currently works as the director of marketing at the Philadelphia Photo Arts Center and the director at PARISTEXASLA. Shawn is enrolled at Savannah College of Art and Design for his Master of Fine Arts in photography. He is based in Philadelphia and is a professor at the University of the Arts.

Kendra Walker: Tell me about yourself, your journey into art, how you got into it?

Shawn Theodore: Well, it’s kind of interesting. I started out initially as a painter studying painting at the Tyler School of Art for about a year. I ended up leaving because at the time, there really wasn’t enough dialogue around what I wanted to do.

In my early days, I’m talking like 23, maybe 24, I got a job at Procter & Gamble in Philly, and by the time I was about 25 or so, I found myself back in college, but definitely not following any sense of artistic practice. I went back [to school] for public relations, advertising and journalism, a triple major. I graduate, I go straight to a high-tech PR job in New York, and that leads to web design, and web design leads to being a CTO at this small company in Baltimore. I’ve worked for them for about seven years, and that’s where my street photography practice sort of took root.

So I was living in New York for a while. Then I was in Baltimore, working, still living in and out of Philadelphia, and I was always just taking pictures. I started dabbling and trying to understand what it would be to create a self-guided project.

KW: Your street photography was picked up while you were working your corporate job. What kind of space were you in during this time?

ST: At the end of 2009/2010, I moved back to Philly, and I started shooting what I know. The first thing that I’m noticing is that all the neighborhoods are just shifting and changing, and things are disappearing, and gentrification is starting at this point. I’m really struck by the way, by how the Black figure moves about Black spaces, even when Black spaces are being removed.

There’s this sort of lonely, romantic kind of movement of the Black body that I was taking note of. I’m seeing there’s a behavior. There is absence, there is the void of homes and community, and then there’s the rhythm of it all, just noticing rhythms happening and behavior changes how the people were holding their bodies, and I started to notice right away. 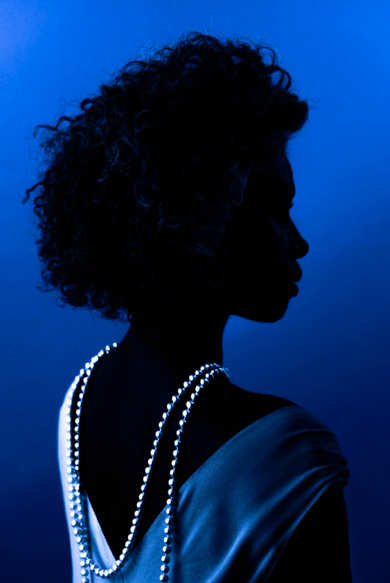 Above: ManMan Walda by Shawn Theodore.

The first thing I noticed was that there were beautiful silhouettes happening. So these silhouettes for me became sort of a driver. I started looking into the idea of Afro-mythology, and I called it Afro-mythology. I was looking specifically for that phrase there in the world, out there in books. And I couldn’t find it. And it was at one point, I couldn’t believe that I couldn’t find something in this overpopulated world of information. African Americans do not have a mythology.

I spent a few years making work that speaks to the ideas and notions of what I believe Afro-mythology should be. And it kept coming back to color. People were very fascinated with my use of color, a painterly technique within the photography itself.

KW: Let’s talk about your current exhibition, Night Stars. Tell me about it. What’s the inspiration behind it? Why blue?

I’m thinking about how blue light is on Black skin and how it changes. So that’s kind of where I started from first, just working out how to wrap a body in blue light, I started to think about the connections the color blue has to our culture. And then I started digging into indigo and how indigo was the original cash crop of the Americas, not cotton or tobacco, and how indigo was more valuable than currency in gold. At one point, indigo was.

The reason we have blue jeans is because of slavery and not just because of the cotton, but because of the indigo as well. When you wear a pair of jeans, you are bringing together so many different elements of the transatlantic slave trade. The necessity to clothe people cheaply—that was where it started—having to clothe your so-called property. So there are entire companies rooted in the Brooks Brothers incident, of them apologizing for their past and being a part of Sunday’s finest, some of the best clothes that you could see on enslaved people came from Brooks Brothers, and even the terms dyed-in-the-wool and things like that, all of these things started to really sort of connect and coalesce for me. 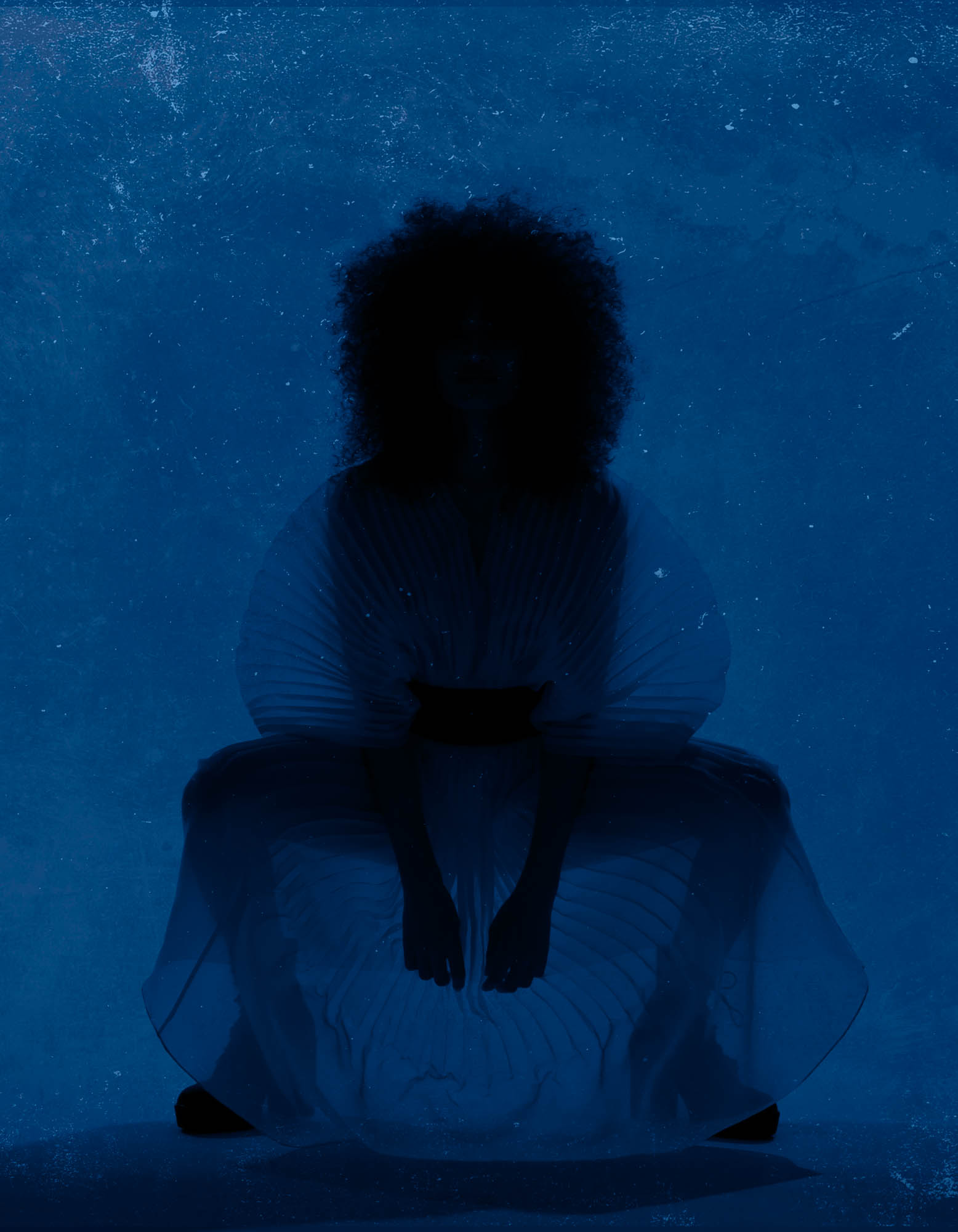 Above: An Underwater Constellation by Shawn Theodore.

KW: What importance do landscapes play in the narrative you are telling?

ST: Well, being Black, you’re automatically tied to some lands and land or lands. In some way, your heritage is tied to this land. Your blood is in the soil. And you are often finding yourself at odds with what the world has in mind for you, as it takes that land from underneath you. These landscapes, these spaces that I’m photographing, these are Black spaces completely. It’s a connection not many of us can say we have to our land. I mean, gentrification proves that nothing here is permanent. I think landscapes are important for me to do because a lot of people take the time to look at my work, and they see the figures, and they only see the beauty.

KW: What are you hoping people get from your work, but more specifically, what are you wanting people to get from this exhibition?

ST: Well there’s a plan for what I’m doing. I’m in the really sort of earliest stages of getting it together and expressing it and having people want to take part in the discussion. As important as Afro-mythology has become, I would like to see Africa be as important. And I think it’s important to make sure that we have a dialogue around mythology, because we are a culture that has created the present and future for the entire world. 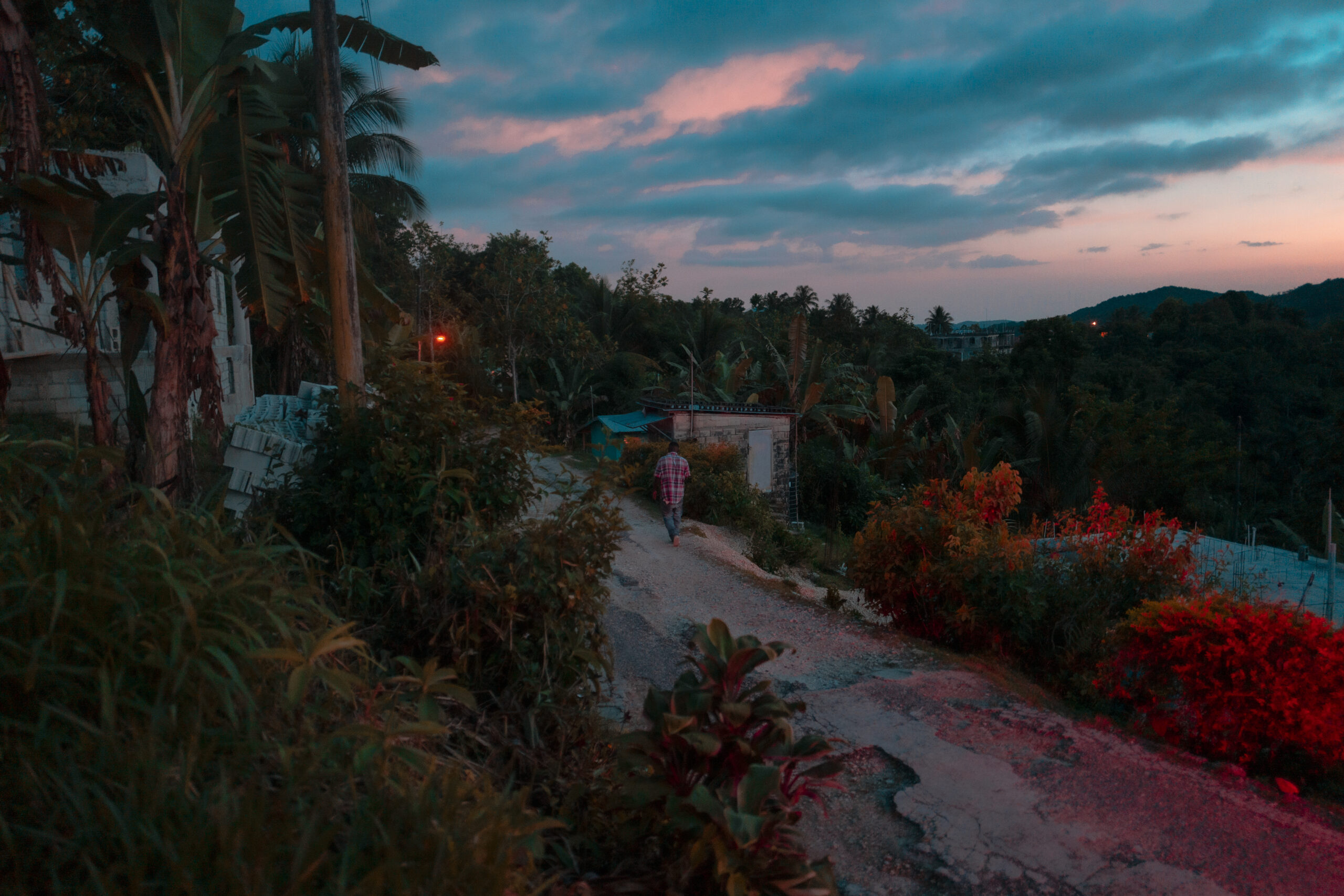 Above: Maroontown Stroll by Shawn Theodore.

We’ve seen some of the most amazing people come from the most traumatic of circumstances and then change the world. So I would like for people to take from the current exhibition that you might be in a gateway; you might be introducing yourself to stories that you haven’t heard or archives that have yet to be researched or even created, but to familiarize yourself with the idea that there are Black people in the future, and they’re deeply rooted in the past, and that past is present. 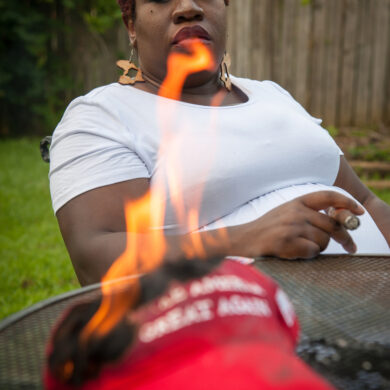 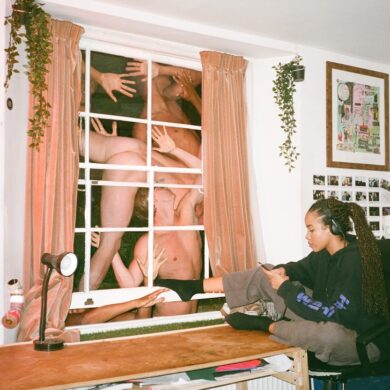 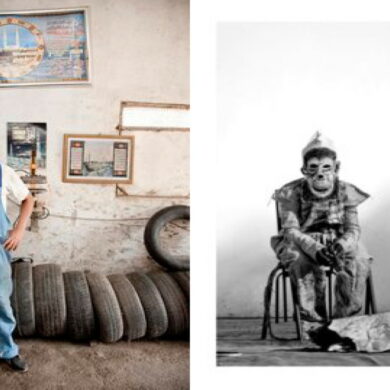 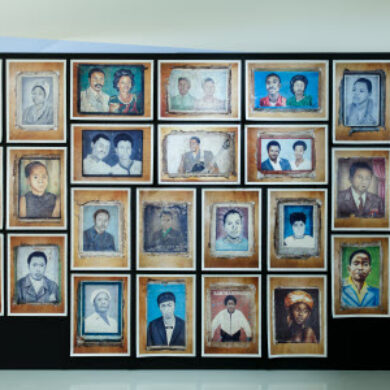 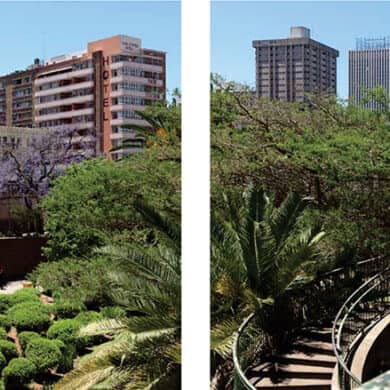 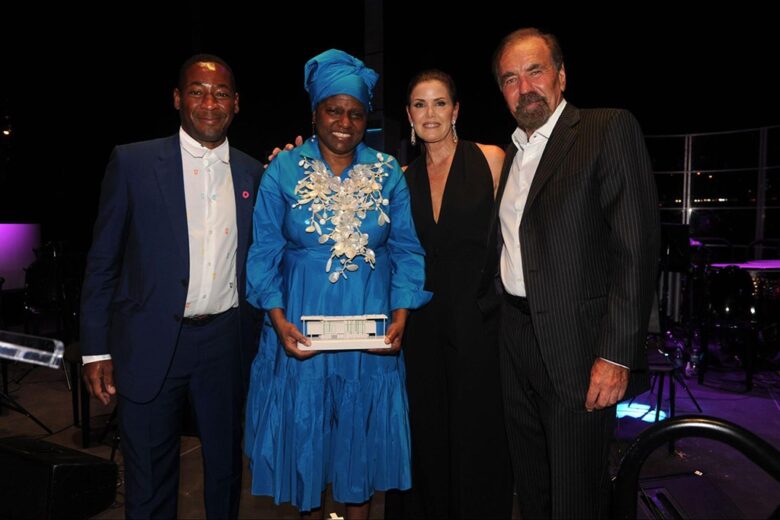 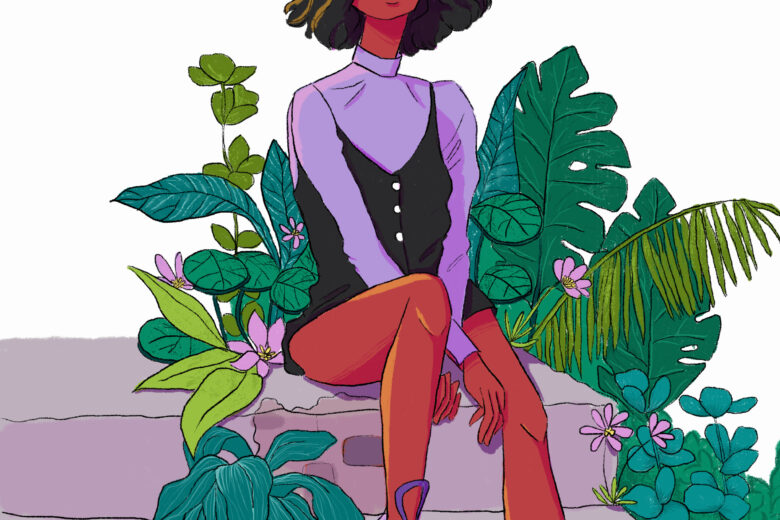