Spring Line Up for the Studio Museum in Harlem 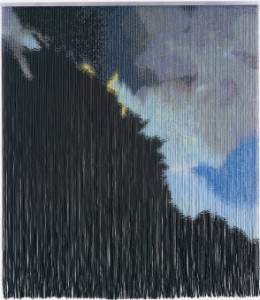 The Studio Museum in Harlem comes alive this spring
with the installation of seven new exhibitions and artists’ projects. Traveling to the Studio
Museum from the MCA Chicago, David Hartt: Stray Light offers an intimate look inside
the Johnson Publishing Company’s iconic former headquarters. Fred Wilson: Local Color,
Assembly Required: Selections from the Permanent Collection, and Brothers and Sisters
all feature highlights from the Studio Museum’s collection, including recently acquired classics,
rarely seen masterworks and brand-new innovations. Ayé A. Aton: Space-Time Continuum
and Mendi + Keith Obadike: American Cypher present focused looks at recent projects,
while Harlem Postcards Spring 2013 continues the Museum’s signature project to bring fresh
perspectives to the Harlem landscape. On view March 28 to June 30, 2013, these diverse
presentations exemplify the Museum’s commitment to promoting and celebrating the wide range
of artistic contributions of artists of African descent and work inspired and influenced by black
culture.

David Hartt: Stray Light presents color photographs, sculptures and a video installation by
Chicago-based conceptual photographer David Hartt (b. 1967). Stray Light reflects on the iconic
headquarters of the Johnson Publishing Company in Chicago, an eleven-story Modernist building
on South Michigan Avenue. Home to Jet and Ebony magazines from 1971 to 2011, the building
was heralded as the first major downtown Chicago building designed by an African-American
architect since the eighteenth century. Hartt looks to the intersection of the publisher’s ideals and
values, the style and aesthetics embodied by the site and the lasting cultural impact of Johnson
Publishing.
David Hartt: Stray Light was organized by the Museum of Contemporary Art Chicago, where
it was curated by Michael Darling, James W. Alsdorf Chief Curator. Support for this exhibition
is generously provided by the Chauncey and Marion Deering McCormick Family Foundation.
The presentation at The Studio Museum in Harlem was organized by Thomas J. Lax, Assistant
Curator.

Fred Wilson: Local Color
The Studio Museum presents conceptual artist Fred Wilson’s (b. 1954) installation Local Color
for the first time since its debut in 1993. Originally created for the Studio Museum exhibition
Artists Respond: The “New World” Question, Local Color incorporates both traditional African and
Caribbean artifacts from the Studio Museum’s collection and an assortment of objects the artist
purchased along Harlem’s 125th Street. Known for his installations and projects in museums
and cultural institutions throughout the world and interested in the intersections between art and
popular culture, Wilson asks viewers to consider what museums choose to collect and which
histories are preserved.
Fred Wilson: Local Color is organized by Lauren Haynes, Assistant Curator.

Ayn: Spaceé A. Ato-Time Continuum
Artist and avant-garde jazz musician Ayé A. Aton (b. 1940) moved to Chicago in the early 1960s.
In the late 60s and early 70s, Aton painted murals in homes in both Chicago and his home state of
Kentucky. A disciple of and frequent collaborator with composer, poet and Afrofuturist pioneer, Sun
Ra (19141993), Aton created murals combining references to and imagery from ancient Egypt,
Christianity and outer space. This collection of over 200 slides documents Aton’s murals through
image and sound, providing an intimate glimpse into the domestic lives of an African-American
community on the cusp of cultural transformation. This project marks Aton’s first solo museum
presentation.
Ayé A. Aton: Space-Time Continuum is organized by Thomas J. Lax, Assistant Curator.
Mendi + Keith Obadike: American Cypher
The Studio Museum presents a site-specific iteration of American Cypher, a suite of projects
that respond to American stories about race and DNA by the intermedia artists Mendi and Keith
Obadike (both b. 1973).
Mendi + Keith Obadike: American Cypher is organized by Abbe Schriber, Curatorial Assistant.3
Assembly Required: Selections from the Permanent Collection
Assembly Required presents photographs, drawings, sculptures and paintings from the Studio
Museum’s permanent collection that explore the ways in which certain works are dependent on
site, and the viewer’s conceptual and perceptual experience of that locale through the artist’s
intervention. Taking Sam Gilliam (b. 1933)’s landmark painting Lion’s Rock Arc (1981) as
inspiration, the exhibition includes a number of works comprised of multiple parts, such as the
recent acquisition Anthology (William Pope.L) (2011) by 2005–06 Artist-in-Residence Clifford
Owens (b. 1971). This exhibition explores not only the importance of location and configuration,
but also the limits of artistic intention when a work is displayed.
Assembly Required: Selections from the Permanent Collection is organized by Naima J. Keith,
Assistant Curator.

Brothers and Sisters
Brothers and Sisters is a cross-generational exhibition that examines the relationships between a
selection of Beauford Delaney’s (1901–1979) paintings and prints made between 1958 and 1969,
and works in The Studio Museum in Harlem’s permanent collection. The works in this exhibition
will be displayed in small groupings—”families” sharing formal and stylistic characteristics—with
an emphasis on the continuation and expansion of painterly abstraction. The exhibition includes
work from some of Delaney’s contemporaries, such as Herbert Gentry (1919–2003), Jack
Whitten (b. 1939) and Alma Thomas (1891–1978), as well as contemporary artists Kori Newkirk
(b. 1970), Rashawn Griffin (b. 1980) and Julie Mehretu (b. 1970), among others.
Brothers and Sisters is organized by Jamillah James, 2012 Curatorial Fellow, as part of the
Museum’s yearlong curatorial fellowship program dedicated to fostering emerging curators
of diverse backgrounds. Funding for the Studio Museum’s curatorial fellowship is generously
provided by The Andrew W. Mellon Foundation and The New York Community Trust. 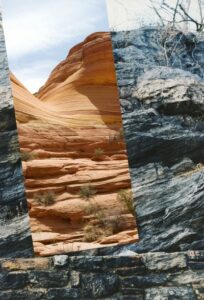 Harlem Postcards Spring 2013:
Alex Da Corte, Ugo Rondinone, Jumoke Sanwo, Letha Wilson
Harlem Postcards is an ongoing project that invites contemporary artists of diverse backgrounds
to reflect on Harlem as a site of cultural activity, political vitality, visual stimuli, artistic
contemplation and creative production. Representing intimate and dynamic perspectives on
Harlem, the images reflect the idiosyncratic visions of contemporary artists from a wide range of
backgrounds and locations. Each photograph has been reproduced as a limited edition postcard
available free to visitors. This season, we are pleased to feature postcard images by Alex Da
Corte (b. 1980), Ugo Rondinone (b. 1964), Jumoke Sanwo (b. 1977) and Letha Wilson (b. 1976).
Harlem Postcards is organized by Abbe Schriber, Curatorial Assistant.4
Also on view 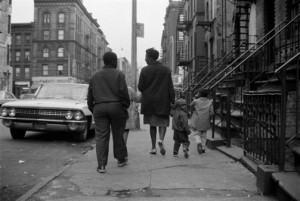 Gordon Parks: A Harlem Family 1967 honors the legacy and the work of late iconic artist and
photojournalist Gordon Parks, who would have turned 100 on November 30, 2012. The exhibition,
organized by Thelma Golden and Lauren Haynes, will feature approximately thirty black and
white photographs of the Fontenelle family, whose lives Parks documented as part of a 1968 LIFE
magazine photo essay. A searing portrait of poverty in the United States, the Fontenelle photographs
provide a view of Harlem through the narrative of a specific family at a particular moment in time.
This intimate exhibition will include all images from the original essay as well as several unpublished
images—some which have never been displayed publicly before. Gordon Parks: A Harlem Family
1967 is supported by The Robert Mapplethorpe Foundation
Harlem Postcards: Tenth Anniversary represents the enormous, yet nuanced range of images
created for the Museum’s signature project series. While many artists have been drawn to the visual
vibrancy of Harlem—from its architecture to its colorful commercial goods—others seek to reveal its
surprising, less familiar corners, or focus on the histories of Harlem’s different communities. Aiming
the camera at the sidewalk, the storefront and the sky, artists have reinvented the notion of what
belongs on a postcard, and what it means to represent a neighborhood to those who do not live there.
Celebrating the creativity of artists within the set limitations of 4 by 6 inches, this installation displays
the postcards as aesthetic rather than functional objects.

About The Studio Museum in Harlem
Founded in 1968, The Studio Museum in Harlem is a contemporary art museum that focuses on
the work of artists of African descent locally, nationally and globally, as well as work that has been
inspired and influenced by African-American culture. The Museum is committed to serving as a
unique resource in the local community, and in national and international arenas, by making artworks
and exhibitions concrete and personal for each viewer.

The Studio Museum is open Thursday and Friday, noon-9pm; Saturday, 10am-6pm; Sunday, noon-
6pm. The museum is closed to the public on Monday, Tuesday, and Wednesday. Museum admission
is by suggested donation: $7 for adults, $3 for students (with valid id) and seniors. Free for children
12 and under. Sundays are free at the Studio Museum, thanks to generous support from Target.