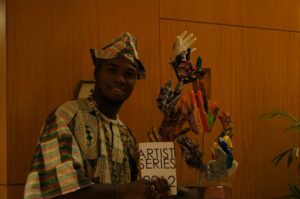 Sugarcane Magazine recently had the opportunity to catch up with Osun’s Village and African Caribbean Cultural Arts Corridor Artist in Residence Prince Emmanuel Abiodun Aderele. Prince Aderale is a multi disciplinary artist with work that spans painting, textile work, music and dance. However,the common thread is passion for Yoruba culture. Youruba culture is one of the well known ethnic and cultural groups in Nigeria, parts of Benin, Brazil as well as an adopted culture for many Pan Aficanists across the globe. Yoruba culture, like so many indigenous cultures found on the continent of Africa is abundant with symbolism and for many, a ever present and consistent spiritual power, whether one follows the Yoruba tradition or not.

At what age did you realize that you had artistic talent?

I pay homage to our great Ancestors who made this dream come true. I have consciously been an artist from the age of 6 years old. When I was a child, I loved drawing on my books; I enjoyed drumming, dancing and singing. During this time, I attended spiritual ceremonies with my parents. Since then, I have learned to direct my creative energies into many areas.

Did your family support your passion for art?

Yes, growing up with 4 sisters and 1 younger brother, the family has always been supportive of my passion for art. As I developed my Multi-Displinary Artistic abilities, I was inspired by my parents as well as siblings. Growing up my parents encouraged us to express how we felt and from there our talents were observed, developed and nurtured.

They would say to me,” Prince, believe in yourself and follow your dreams. With this advice, I have believed in myself and followed my dreams throughout this journey to and within America. 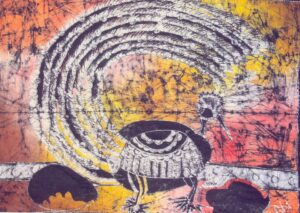 When did you start making a living from art?

What is your artistic trajectory?

As a self-educated artist, My goal is to share Yorùbá Sacred Art that reflects my background, growing up in a West African Royal Family. The practical knowledge and experience I have in cultural heritage helps me create a bridge for Community Residents in South Florida, to re-establish links with their West African Yorùbá Roots and Origins. Traces of Culturally Unique Yoruba Spirituality, Aesthetics, Cuisine and Rhythmic Expressions are still expressed today, through the Popular Culture of these African Descendents, despite the travesty of the transatlantic slave trade. 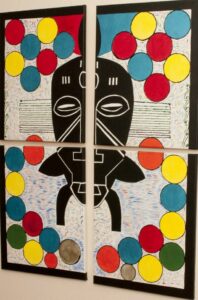 Your work is rich with symbolism. What does it represent and what is it rooted in?

My Work is called Yorùbá Sacred Art, Yorùbá is the native tongue of the people of Nigeria West Africa and it has a distinct sound. It’s spoken in Benin, Ghana, Togo, and among other countries.

It represents the freedom of our people, and it is rooted spiritually. My painting tells story’s about the Forces of Nature which are called Orisa in Yoruba.

As you know Miami is full of diversity. Yorùbá Arts, Language and Music have been preserved throughout the Diaspora, and are all still expressed in countries like: Brazil, Sierra Leone, Cuba, Puerto Rico, Venezuela, Haiti, Trinidad and Tobago and USA.

Tell us about your path to the United States and why did you choose the U.S.A to settle in?

Firstly of all I want to thank my mentor Otunba High Chief Nathaniel B. Styles Jr., Harlan Woodard AIA, Ms. Donna Styles, Ms. Malvia Davis and Ms. Megan Davis for believing in my talents. I chose U.S.A., specifically South Florida because it is the location of Osun’s Village and African Caribbean Cultural Art Corridor in Miami, Florida. The entire Arts, Culture, Tourism and Bi-Lateral Trade Initiative is a project of Community Builders Holistic Development Corporation, a Int’l Not for Profit/Mutual Benefit Organization based in South Florida, which I was chosen as the first International Artist in Residence.

As stated in the State of Florida’s 2006 Legislative Bill, “The Osun’s Village and African Caribbean Cultural Arts Corridor will be the first of many initiatives which will promote: workforce development in the cultural industry; social change by creating access through transportation; cross-cultural awareness which will stimulate economic growth throughout our urban communities; and international trade and commerce.

I chose USA because I knew unquestionably that when I arrived Miami, my mission would be accomplished, due to the fact that Miami is a melting pot of diverse cultures and the base of this initiative. My purpose is to touch souls and reconnect all I come in contact with to their roots, through my art, dance and music.

Has your work been embraced here in the United States?

Yes, My work has been embraced in the United States! Although my Yoruba Sacred Art is different from what American Artists are expressing, it resonates in the hearts of many who have an opportunity to view it. I have met numerous artists expressing their creativity through different mediums. The interaction with other artists during performances, exhibitions and solo shows has had a tremendously positive influence on my work.

Artist Meetups, organized by the South Florida Artists Association, where various artists come together and share their experiences, have also proven to be very rewarding for me, especially as I am often the youngest among all of the artists, and the only African. I have been warmly received and I am very pleased to share my talents.

I met international performing artists such as Tito Puente Jr., performing with him as a special guest artist at the DOCMIAMI International Film Festival. We shared the stage with the renowned Afro-Cuban musician and legendary actress, Olga Guillot, who passed away a few weeks after the event. It was a great pleasure for me to have met and performed with legends such as these. The music Tito played, the songs Olga sang, and the complexion of their skins reinforced the fact that our common West African ancestral heritage has been preserved. This was a very emotional experience for me, which moved the audience to their feet as well!

Many of those in the Diaspora from the Caribbean countries were brought from Africa, during the Transatlantic Slave Trade. The culture and traditions this predominant population bought with them are still alive and active today.

In the past, I collaborated with the Afro-Cuban master drummer and drum builder, Ezequiel Luis Torres in Miami and Washington, DC. Ezequiel is originally from Havana, Cuba and is the winner of the 2010 National Heritage Fellowship Award, organized by the National Endowment for the Arts. The awards performance was held in Washington DC at the Library of Congress and The Great Hall at Srathmore, MD.

When I met the Afro Cuban Ezequiel, it was like meeting a lost brother. For me, it was a great joy to share my talent with my fellow brothers who has made great sacrifices to preserve their West African culture, customs and traditions.

After our return from the DC Awards Ceremony and performance, I was honored to receive a proclamation and Key to Miami Dade County, Celebrating: Community builders, HDC Fork Heritage and Cultural Heritage Day.

I was really impressed with your textiles. Can you tell us why you chose that medium of artistic expression?

Through my Sacred Yorùbá Artistic expression, I chose to also work with textiles because they entail Encoding Sacred Symbols that illustrate Sacred and Historical Events, Stories and Folktales. I love the medium because when it’s worn, it speaks through you! As my parents taught me, they always said; Your Culture, Clothing, Music and Dance is your identity you must make to wear them all the time.

So when you see the textile it speaks for itself.

What are you reading?

What music are you listening to right now?

What artists do you think Sugarcane readers should be watching for?

Ancestral Journey of Yorùbá Sacred Drum & Dance Across the Sea. 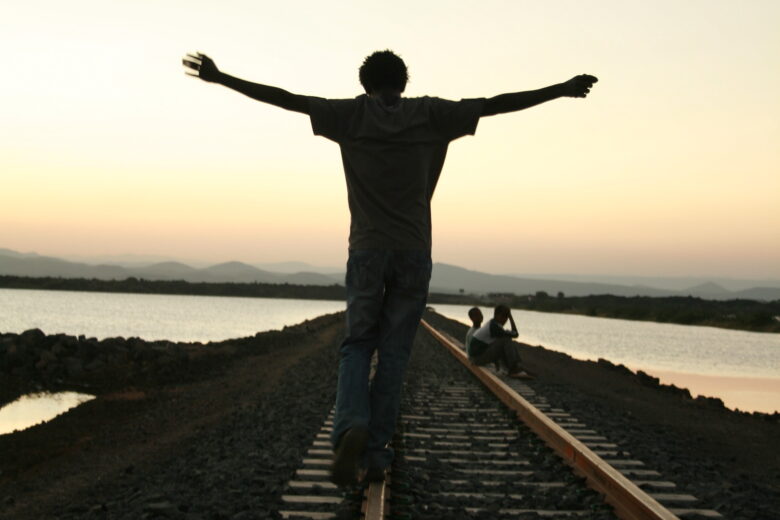 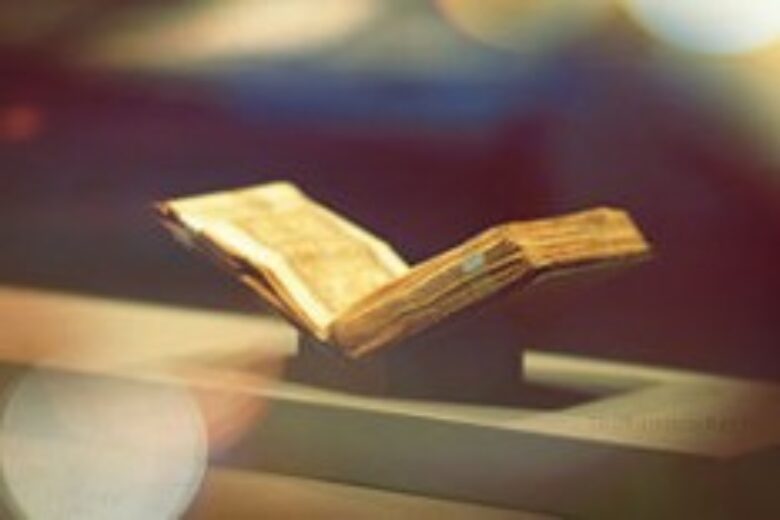