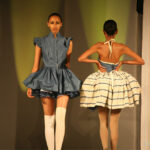 Clairvoyant and In the Bag, announced on Monday that Hub of Africa Fashion Week, will take place between 25 and 27 April 2012. The event will also include a trade expo, which is expected to see the participation of a number of exhibitors from around the world and the holding of symposiums. The organizers say the event will be a source of knowledge transfer, given the involvement of industry leaders.

“The fashion week will also allow designers to showcase their lines” a statement from the organisers read. ”For the Fashion Week, we will be giving away three awards to the designers, which are going to be judged by a panel,” the statement said. ”These awards include participation in a Fashion Week in the US, one in Europe and the retailers award.” The organizers hope that the fashion week will help designers in building and growing the African fashion industry.