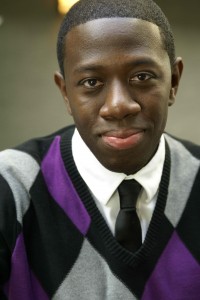 The ABFF Star Project was launched in 2009 as part of the common goal to encourage serious pursuit of the craft by providing a platform for undiscovered actors while supporting their career advancement. In addition to Hobbs and McKinney, the finalists also included two female entrants, Osa Ighodaro (The Bronx, N.Y.) and Kim Pettiford (New York City) as well as two males, Donald George (Los Angeles) and James Holloway (New York City).

The two grand-prize winners will receive all-expense-paid trips to Miami, Fla., to this year’s ABFF convention from July 6-9.

Star Project entrants were required to submit two videotaped monologues: one of their choice, and one selected by NBCUniversal and ABFF. The Star Project Jury was comprised of an esteemed panel of accomplished actors, directors and casting executives.

“We at NBCU are honored to work to with the ABFF as the primary sponsor of this year’s Star Project,” said Carter. “There are so many young and diverse artists out there who deserve a chance to showcase their talents and vision with a program that will nurture and boost their early careers.”

Hobbs began acting, dancing and singing at the age of 3. In 2009, she was accepted to the attend Southern Methodist University’s (SMU) prestigious three-year Master of Fine Arts graduate acting program on full scholarship. To date, Hobbs has been cast in the lead role in numerous SMU campus production, including Carise in “La Dispute,” Mrs. Gibbs in “Our Town,” and Gloria in “You Never Can Tell.” She is currently in Santa Rosa, Calif., in rehearsals for the Summer Repertory Theater’s productions of “Hairspray,” “Company” and “The Piano Lesson.” Hobbs will be entering her final year in graduate school at SMU in the fall.

McKinney has appeared in professional commercial, TV and feature-film projects. His film and television credits include “Know Thy Enemy” for Lionsgate, “Bahama Hustle” for Maverick Entertainment and “Burn Notice” for USA Network. He has also expanded his repertoire in co-writing and producing while starring in his own Web-based show “Make It Happen,” for which he has received many accolades and is looking to shop around to networks later this year. McKinney attended Miami-Dade College and received an Associate in Arts degree in theater education.

In addition to the winners’ free trip to the ABFF convention in Miami, the Star Project winners will be presented before the festival audience during its culminating event — the ABFF Honors on July 9. Additionally, one grand-prize winner will be granted a walk-on role on the award-winning NBC daytime drama “Days of our Lives” and will have the opportunity to audition before a leading casting director.
HBO is the festival’s founding and premier sponsor. Other sponsors to date include: Grey Goose and Team Sizzle Worldwide (premier sponsors); the gmc Television Network, Cadillac, American Airlines, Gold Peak Tea and Wells Fargo (official sponsors); The Nielsen Research Company, Nickelodeon, NBCUniversal, Codeblack Entertainment, Grab Networks and CNN (supporting sponsors); the Miami Beach Visitor & Convention Authority and The Greater Miami Convention & Visitors Bureau (host sponsors); CBS, Stella Artois, Writers Guild of America West, SAGIndie and FOX Searchlight Pictures (diversity partners). Media sponsors include Black Enterprise, “The Michael Baisden Show” and Uptown (official level); AOL Black Voices, Heart & Soul, Automotive Rhythms, Monarch and Precious Times (supporting level).
Established in 1997, the core mission of the ABFF is to promote cultural diversity within the motion picture industry. Through its film showcases and special contests, it annually introduces the top echelon of emerging artists to the film and television industry. 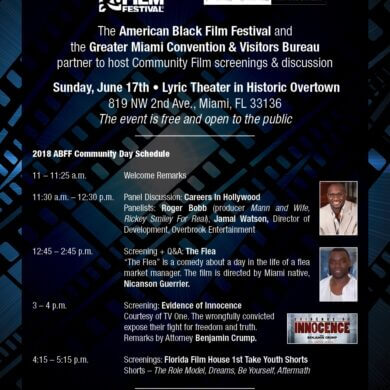