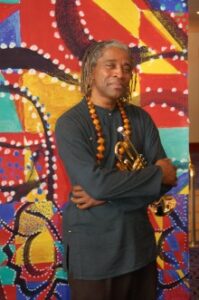 Hannibal Lokumbe, 2011 Joyce Awards winner, will premiere In the Spirit of Being at the annual VocalEssence WITNESS concert on February 19, 2012 (4 pm), at Ordway Center for the Performing Arts in Saint Paul.

VocalEssence commissioned Lokumbe (Dear Mrs. Parks, WITNESS 2007) to write In the Spirit of Being, a four-movement piece scored for mixed chorus, children’s chorus, jazz quartet and female soloist Tonia Hughes. In the Spirit of Being artfully presents the stages of the human experience — birth, struggle, forgiveness/resolution, and peace — as seen through the eyes of the composer. For more information and to order tickets, call 651-224-4222 or visit www.vocalessence.org/witness2012.

The African continent is rich in musical sounds for voices and drums. VocalEssence opens this year’s WITNESS concert by celebrating some of these sounds with music from South Africa, Kenya, Cameroon and Ghana: a wonderful combination of songs about work, praise, and animals sung in the dialects of Luo, Xhosa, Zulu, Kamba and Cameroon. Joining the VocalEssence Chorus and conductor Philip Brunelle will be the percussion ensemble from Macalester College and their director, Sowah Mensah. Don’t miss the opening procession with the seldom-seen royal drums of Ghana!

In 1991, VocalEssence created WITNESS to celebrate the artistic contributions of African Americans to the fine arts and to our common cultural heritage. By commissioning new works and programming rarely heard works by African American composers, we help broaden ideas about African American musical expression and introduce important new voices to our audiences through concerts, recordings and radio broadcasts.Hannibal Lokumbe is a composer and jazz trumpeter whose career spans more than forty years. After moving to New York in 1970, he spent the next 25 years there playing trumpet and recording with legends such as Gil Evans, Pharoah Sanders, and Elvin Jones. Lokumbe eventually formed his own Sunrise Orchestra, which has toured the world playing in every major music festival from Istanbul to China. He has composed more than 150 works, many of which have historical subjects such as John Brown, Anne Frank, and Rosa Parks. He is the recipient of numerous awards from the Bessie, the National Endowment for the Arts, and a Lifetime Achievement Award from the Detroit Symphony Orchestra.