I came across this today on Facebook and thought that with was a great idea.

African-American Classics presents comics adaptations of great stories and poems by America’s earliest black authors, illustrated by contemporary black artists. The volume is co-edited by Tom Pomplun and Lance Tooks, a longtime contributing artist to the series. “This is an unprecedented opportunity to expose young readers of all races to a group of brilliant American authors who’ve never been adapted into the comics medium, interpreted by some of our industry’s top talents,” states Lance. 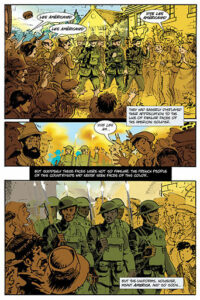 The Graphic Classics® series presents the works of great authors in comics adaptations and heavily-illustrated text. The adaptations are written at an adult level, and utilize as much of the author’s original language as possible. Our goal is to create books that are enjoyable for adults, yet accessible to children ages twelve and up. Unlike other comics adaptations of classics, these books are anthologies; they present a large number of short stories, with occasional poems and abridged novels, each illustrated by a different contemporary artist. Artists are recruited from the fields of comics, book illustration and fine arts, and include new talent, as well as industry veterans from all over the world.

Graphic Classics are available in bookstores and comics shops nationally, or direct from the publisher, Eureka Productions at http://www.graphicclassics.com/.

This a wonderful way to introduce the classics to young people. I also love that they used black artists as well as amazing stories.

Rewind: Dick Gregory’s ‘Nigger: An Autobiography’ to be Re-Released for BHM