Talamieka Brice is an award-winning artist, photographer and visual storyteller. She is inspired by her hometown of Kilmichael, Mississippi, and by artists Michelangelo, Shakespeare and Maya Angelou. Recently a portrait of Brice, Forever Mood, taken from a series of stills from her documentary film, FIVE, went viral.

Lisa Ramos: Greetings, Talamieka! Thank you for taking the time to chat with me.

Talamieka Brice: You too! It’s funny we were both on the same page and had slept in. I totally forgot about the day and the time.

LR: Right?! Girl, the struggle is real these days. Nothing before coffee! Let’s start with you telling me a bit about your story?

TB: I was born and raised here in Mississippi. I went to Jackson State and married my college sweetheart, Charles. He’s a vet who has served in Afghanistan. We have two children, my son Honor and my daughter, Love.

TB: No, he’s been honorably discharged. These days, we’re raising our kids and collaborating on projects together. Most recently, he helped me with a mural at Barack Obama Elementary in Jackson. It used to be called Jefferson Davis Elementary, but we took that down. Obama is a 98% Black student magnet school and one of the best elementary schools in the state.

LR: Tell me about the circumstances around doing that mural?

TB:  Well, we wanted to honor Obama and each other. I think it was cool for the kids to see people who looked like them doing the project. I mean, we were up there on a scissor lift working and painting. Representation is important for us and for the kids to see that we can also be working artists.

LR: Tell me about your portrait and how it went viral.

TB: In February, I was in a group exhibition with Sabrina Howard and Adrienne Dominic at the Jackson Art Center. Then COVID shut everything down. By then, I had already started work on my documentary, FIVE. (At the time,) I felt a lot of trepidation about Honor transitioning from daycare to public school. I realized he’s going to be a Black man one day, and I want him to be safe in this world.

I remember as a kid how segregated Mississippi was. In 1988, the Klan once came looking for my brother. My grandmother also told me a story about when she was young, she heard the screams of two men who were taken into the woods and lynched. So, the idea all came from that—what I was feeling and what I’ve learned. I used a still we were using for FIVE. Once I posted it on social media, it just blew up. That story my grandmother told me was true. Those two men were Bootjack McDaniels and Red Townes.

LR: When did that happen to Bootjack and Red?

TB: They were lynched (in Duck Hill) in 1937. It was big news at the time. White folks took pictures, which ended up being published in Life magazine.

I went out to that area in the woods with my film crew and meditated on it—our history and all that pain. I thought about the time of Obama to where we’re at now. That’s who Trump got to—the mediocre-ass, white men who have failed and blame minorities. That’s what the MAGA hat represents to me. I’m burning that ideology down by burning the hat.

LR: That image of you is quite fierce. When I first saw it, I was struck by the Black womanist context and symbolism of it. Were these intentional?

TB: Definitely. Everything in my portrait was intentional. Sabrina Howard designed the Africa-Mississippi earrings. I’m wearing white to cleanse myself of the pain. The cigar is a thing I do on occasion. Sometimes I like a real nice cigar with a stiff drink to help me sort things out. I’m angry, but I’m also sorting myself out through this time. Growing up, I learned a lot about race. I saw the Confederate flag on trailers and houses. I know some white men grew up in a time where they were treated like shit by the white men who raised them. At the root of racism is their pain—and they put their pain on Black people. One day, I’d like to live in a world without pain.

Sometimes, I go into my nightmares to make art. I think about Black men who served their country, then came home in uniform and were lynched. I think about being a Black woman today in this country and all the microaggressions we deal with—even just going to the doctor!

LR: It’s interesting you mention that. I had an eye exam yesterday, and my blood pressure was 121. The optometrist seemed a bit awkward. I sensed what was coming—that “African-Americans are at higher risk for…” rap. I told her that I already know. I have a history of hypertension in my family, and I’m aware.

TB: Yes! They don’t expect us to have much awareness of our own health. Also, the representation of me as a dark-skinned woman from the South was important. I have very Black features—my mouth, my nose. I wanted people to see me as I am.

I love Shakespeare. I think he writes about pain like a Black woman. There’s one sonnet that I learned in high school. I think it’s Sonnet 18:

Shall I compare thee to a summer’s day?

Rough winds do shake the darling buds of May,

And summer’s lease hath all too short a date;

Sometime too hot the eye of heaven shines,

And often is his gold complexion dimm’d;

And every fair from fair sometime declines,

But thy eternal summer shall not fade,

Nor lose possession of that fair thou ow’st;

Nor shall death brag thou wander’st in his shade,

When in eternal lines to time thou grow’st:

So long as men can breathe or eyes can see,

So long lives this, and this gives life to thee.

LR: Yes! Shakespeare is dope! At this point, what kind of response have you had to your portrait?

TB: Wow, it’s been amazing. The response has been a mix with about… 80% white people who want to support my work and purchase prints. People from all over the country—Alaska, California, Florida, Missouri, Texas. It’s also inspired others to create—I get a lot of tags on Instagram. I think that’s cool! There’s also been the weak-ass trolls who come for me. At first, I was letting them have it. Because of their sense of entitlement, they thought they could come at me about my body, criticize and dehumanize me. There was a lot of misogyny in that, not just racism. I decided to not give them any more energy. You’re not walking on sunshine, boo boo. You have issues. I just sit more into love with myself and my family.

LR: Tell me about your children?

TB: Honor was born during the Ferguson riots. Then his third birthday was the day Charlottesville, Virginia happened (Aug. 11-12, 2017). His middle name is Kal-El, which means the Voice of God. Love came after, she’s three now. Her middle name is Elohim, which in Hebrew is the name of God. I have their names tattooed on each forearm.

LR: So, Honor the Voice of God and Love God.

TB: Yesss. (nods) I’m more into the dirty fingernails Jesus, the one out in the streets with the people doing the work. Not the white-washed Jesus. Honor says “everyone comes from the God star.“ Or he calls him the “King of the brown-skinned people.” I love just hanging out with my kids and listening to them. Honor and Love are pretty dope little people.

LR: How do you feel about this election and the issues we’re confronted with?

TB: I’d like America to live up to its ideals—freedom from what? I want freedom beyond the cis white man it was created for. I want America to know I am here and that I matter. All Black lives matter equally.

Prints of Talamieka Brice’s Forever Mood can be purchased directly at talamieka.com. Prints are shipped flat. You can follow Talamieka on Instagram @talamieka.  Her documentary film, FIVE is currently in production in Mississippi. She hopes to screen FIVE at the Sundance and Magnolia film festivals in 2021. 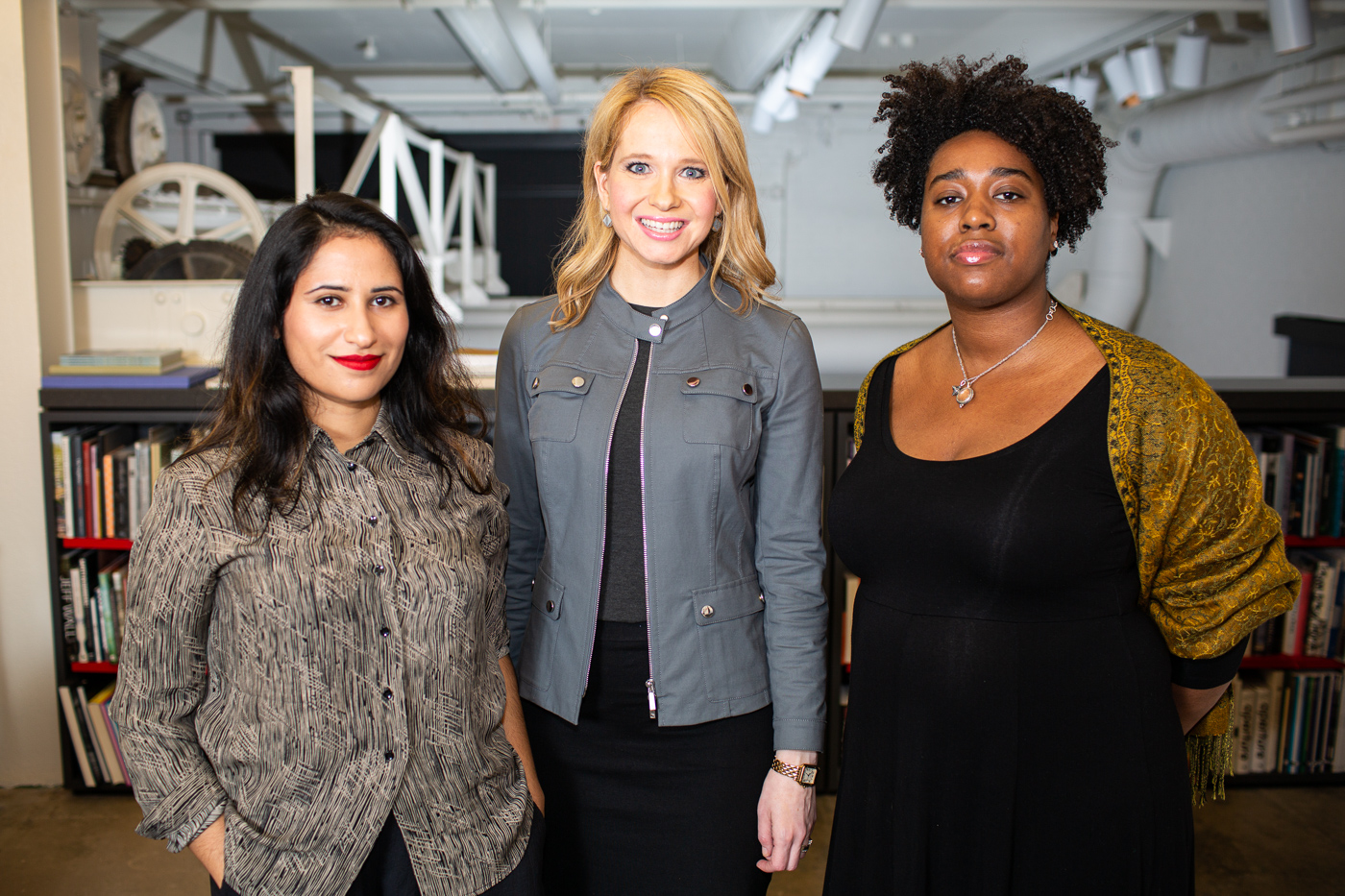 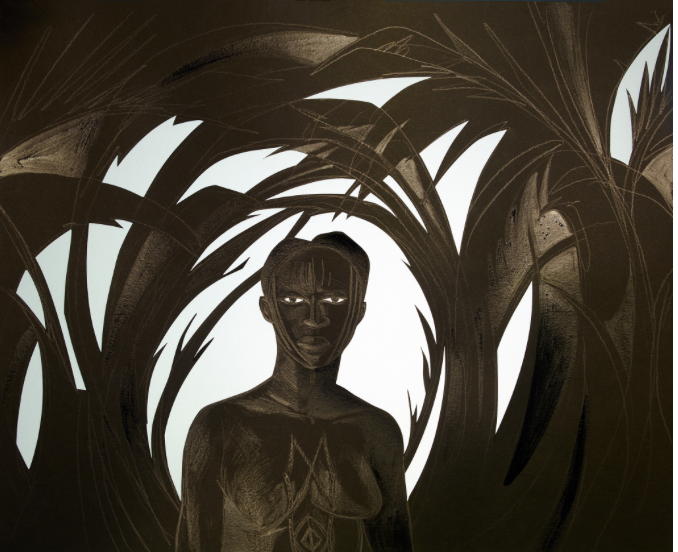